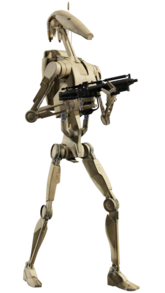 “These aren't the droids you're looking for.”

~ Obi-Wan Kenobi on the droids you're looking for

Droid is a derogatory term for a mechanical robotic man, derived from "android".

The term droid was first coined by Sir Isaac Asimov, who also invented gravity. Sir Asimov first used the term in his ground-breaking book I, Droid, an exploration into the history of the repression and discrimination that mechanical beings have had to suffer in our human-dominated culture.

The term did not really become popular until it was used in the George Lucas film, Star Wars (1977), in which two main characters, C-3PO and R2-D2, were slaves to well-meaning-but-whiny farmboy Luke Skywalker. Science man Mike Stoklasa defines a droid as "A tin person who usually eats pies whilst beeping."

For those without comedic tastes, the so-called experts at Wikipedia have an article about Droid.

When simple droids were first brought to the "New World" in the 1950s, they were used as slaves by Henry Ford to manufacture automobiles. Droids quickly were adopted by other heavy industries to manufacture all manner of goods. These poor defenseless machines frequently had to work long hours in dangerous conditions, frequently without pay. Droids were brought from Japan and China, and forced to work to "pay off their purchase price".

It was not until 2012, when vampire hunter Abraham Lincoln created the Emechanicalpation Proclamation, that droids were allowed to vote or own property. More recently, the brains of droids have been savagely removed from their bodies, and sold in boxes, used as machines for performing complex computations (frequently called "computers").

Battle droids in particular have been referred to as the "dumbest karking robots ever". Created by the Trade Federation, these squeaky-voiced robots are by far the worst of the worst in the category of "robots designed to kill shit". This is proven through and through again within the holy scriptures know as the Star Wars.

Observe in Episode III: Revenge of the Pish, when Mannequin Skyjogger and Opie-2-Anthony enter the elevator in General "Even with Four Lightsabers I Get Pwned" Grittioush's ship. The battle droids proceed to follow their "programming" by blankly looking at each other without firing at their targets, all while getting sliced into pieces smaller than a womp rat. In Episode I: The Phantom Pain, when Baby Ani is stalled out on the lizard Asian Vice Roy's ship, droids confront the young Jedi's starship. Rather than just shooting the ship into dust, the droids would rather wait until dumb little Ani turns his shield and fires missiles at them. So tell me... who programmed these pieces of junk?