Vicious! You can still see the droid guts round its mouth.

“They were an interpretation of my inner self”

~ George Lucas on why he added Ewoks to Star Wars.

Ewoks are small, chubby, fluffy creatures from the forest moon of Endor who later immigrated to Australia (because of the climate) to join the circus. They are known to hunt in packs of six in Holden Commodores, hanging around the Midland train Station. Due to similarities in their languages, Ewoks are sometimes confused with small, hairy Welsh midgets. They live in tree-houses, which is like, totally cool. I wanted to live in my treefort, but Mom wouldn't let me. And then she made me give back all that lumber I took from the construction site to build my expansion, and I'm like, "But MOM! How will I build my second story?" But, like, does SHE care? (No.) And she still wonders why she doesn't get a card on Mother's Day.

Ewoks were first discovered by Jane Goodal. Ewok comes from the Polish name, Ewa Malinowska. Anyway, Ewoks are about 1 foot tall and enjoy feasting on the guts of droids especially little obese round ones. What I forgot to mention above was that after migrating there they bred with native animals, like Michael Jackson(R.I.P), to create what we know now as a koala. Contrary to popular belief, Ewoks had superior intelligence to the Empire and since they would have beaten the empire in 5 minutes with their vast repertoire of star ships. They decided to prolong the battle and instead use their slightly less advanced spears and rocks, which broke through armor and exploded, respectively. It was purple which was cool and matched their blue brains when they explode out the back of their heads.

One of Darth Vader's favorite sports was the Ewok Toss, which involved tossing Ewoks off of tall cliffs.The famed Golden Chodum was the prize at the Endorian Olympics for this sport, Darth Vader said "I wish I had that fat golden chodum!" Points were awarded for distance travelled, time airborne, number of turns made by the ewok in midair, the pitch and volume of the stupid Ewok's scream, number of Ewoks tossed, and the splash pattern made by the impacting Ewok.He also awarded the Ewoks with the best BJ Award, won by Bob. With the fall of the Galactic Empire to the Rebel Alliance, Ewok Tossing was no longer the sport of cruel overlords. Instead, it was made the official sport of the New Galactic Republic. You can also become universe champion of this sport if you could throw the ewoks and then hit them with a blast from the Death Star Laser. Wonder who made that rule up. Darth Vader says "make it up, i did not. he he he weak minded fools"

To compensate for the inability to toss Ewoks around, they came up with a new sport called Ewok stabbing, needless to say, it has not been well accepted by the Ewoks.

They can be easily bribed by giving them food, that you've randomly taken from the pouches around your waist, and will let themselves be carried around by any strange person (Attention all Pedos, if you need to rape something, Ewoks will apparently eat anything, so promise them candy!). They think they're getting a good deal if you give them Supermarket chicken, as the species is not native to their homeworld. As such, many Ewoks are kidnapped, and have now taken over little Billy on pedophiles' most captured list. Midgets are a type of Ewok, when the first human discovered the first Ewok , Masoni Grayotos , on a scouting mission for earth , they instantly fell in love and in fact they did the WHOLE kama-sutra in 5.5145555 minutes. because of this mind boggling event they can also be bribed with sexual intercourse, or just two hugs and a reach-around.

However, they can be used as fighting midgets in times of dire need (very very dire). They can use wood to kill stuff. Oh yeah, and stones. Or rocks. One of the main advantages of their warfare is their size, because when they stab human sized beings with their spears, they will usually strike around the groin, because they can't reach any higher. And if the enemy employs midgets to fight back, they'll still stab them in the groin. But, when summoned, they can easily kill a unsuspecting battlefront n00b/stormtooper from behind a bush or somewhere else hideous. Sadly, the stormtrooper's advanced combat-designed battle suit and military-grade weapons and training can do nothing to stop the rocks and spears thrown from these small teddies. When planning a battle with the aid of ewoks, remember the following guidelines:

And if they completely mess up everything and you get really pissed with them, they make good fur coats. Or bird nests(random) . Or teddy bears. But don't feel guilty for killing or mutilating them. Just remember: Ewoks do not possess souls. If all else fails Ewoks have a backup plan, sumo Ewoks. these are steroid enhanced Ewoks with immense power. A signature move originally was to put the back to the enemy, bend over and unleash hell from the rear end. The air filters on stormtrooper helmets were no match for the toxic Ewok gases.

Ewoks have long been a target for abuse for the xenophobic element in society; the imperial remnants consider Endor holocaust denial a hate crime. While there have been a few high-profile stories of Ewoks running houses of ill repute, many Ewoks come to Earth every year to set up in business, and only a handful of those become brothel-keepers. The common misconception that Ewoks are a bunch of whoremongering benefit scroungers was put about by the Reagan administration, the president was rumored to have an Ewok-skin rug in his bedroom at the time. Many a science fiction fan from the 80's despises Ewoks and became a greedy 80's businessman to pollute the environment because of them, the only other 80's aliens to receive such racial profiling while doing a public service announcement is the space whales in their cylinder ship from Star Trek IV: The Voyage Home.

In addition to their well known roles in Star Wars: Return of the Jedi, Ewoks have also been featured in other less well know productions. Perhaps most notable was the animated series Star Wars:Ewoks. While originally intended to air as a Saturday morning TV show, the creators soon realized that it would be much more profitable as an interrogation technique. In a top secret auction, the show reportedly sold for more than 42 million dollars to notorious super villan Dr. Doom. For reasons unknown Doom then sold the rights to the show back to ABC, where it aired for two seasons. The exact effects of this exposure on children is still unknown but scientists speculate that it will be similar to what happens when a person observes a two dimensional object in a mirror from the corner of their eye during an eclipse of the full moon or, like when you spin around in circles for a minute after drinking the bong water. 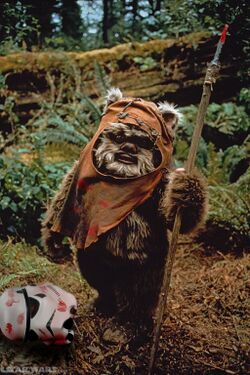 No. This actually happened. Watch the movie.

Comedian Ross Noble and Professor Brian Cox are planning on launching trips to Titan so that the human race can participate in the annual pan-Solar System "Tossing Ewoks into a Lake of Farts" championships. Points in this inter-species event, are awarded for artistic merit; speed of shattering; radius of shatter debris field; and amount of Ewok ejaculate produced.