Solo: A Star Wars Story is a 2018 American science-fiction, space-western film set in the Star Wars universe. It is the second non-mainline live-action Star Wars film, with the first being the 2016 film Rogue One. Set 13 years before the events of A New Hope, the film follows a young Han Solo and him meeting his new best-friend Chewbacca, who at the time is Jewish.

A long time ago in a galaxy far, far away...

There is no title crawl. 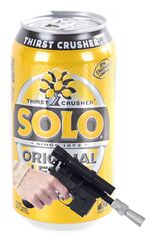 Han Solo was turned into a can of soft drink in a Solo deleted scene.

On Corellia, Han and his girlfriend Ra'Qi escape a local gang after stealing left over mouldy bread. In order to get off planet, they need to bribe an Imperial officer. Ra'Qi suggests that she gives him oral sex, and the officer accepts much to the dismay of Han. While Qi'Ra is trying not to blow her cover, Han boards the ship but before Qi'Ra can also board, she is captured by Stormtroopers. Han makes a silent promise to himself that he will return for her, but forgets seconds later, when he joins the Empire as a pilot cadet. Since he is an orphan, it was expected that he pick a cool name like 'Batman' or something but no, he is given the name 'Solo' by an unnamed old guy.

Three years pass and Han is now an infantryman. On the planet Mimban, following his expulsion from the Imperial Flight Academy for drinking and flying. He then meets a trio of criminals posing as Imperial soldiers, led by Toby Beckett.

Wanting to join the gang, Han blackmails Beckett, but since Beckett was posing as a high ranking officer, he has Han arrested. Han being Han pisses off the prison guards and as punishment and to shut Han up, the guards throw Han into a pit. Inside the pit is a Wookiee prisoner named Jewbacca — who was arrested for being brown furred and Jewish.

Somehow knowing how to speak Wookiee, Han persuades Jewwy to help them escape. The two then catch up with Beckett, who now allows them to join the gang for plot convenience.

They then plot to steal a shipment of coaxium on Vandor-1. The plan fails miserbly when the Sky Runners, a group of Anakin Skywalker fanboys led by Ants Nest, arrive to hijack the shipment. The resulting chaos leads to the destruction of the coaxium and the deaths of Val and Rio in a real action movie style.

Beckett explains that he was ordered to steal the shipment for Dry Den Vos, a high-ranking crime boss in the Crimson Dawn syndicate. Han and Jewbacca help him steal another shipment to repay the debt that Toby owes so that Vos will not cut his penis off.

They travel to Vos's yacht where Han is reunited with Ra'Qi, who has joined the ranks of Crimson Dawn. Han suggests a risky plan to steal unrefined coaxium from the mines on Kessel. Dry Den approves, but only if Ra'Qi join the team. With the film now starting to become a heist movie, she leads them to Lando Calrissian, who she hopes will lend them his ship, the Millennium Falcon for free, or at least a hand-job. Not wanting his now ex-girlfriend to pay with sexual favours again, Han challenges Lando to a game of cards, with the wager being Lando's ship. Lando cheats to win but agrees to join the mission, in exchange for a blowjob from Jewbacca.

After reaching Kessel in the Falcon, Lando's sex droid B0-0B5 instigates a robot revolt. They steal the coaxium, but B0 is fatally damaged along with Lando being wounded during the escape after shooting himself in the leg by accident. They upload B0's memory into the ship's systems, where Han then pilots the ship through the dangerous and uncharted Kessel Run to elude an escape an Imperial blockade that was set up to catch drunk pilots. They land on the planet Savareen to process the coaxium.

Ants having tracked the team since a deleted scene, arrives where Lando leaves in the Falcon, deserting everyone else. Ants reveals that she and her crew are rebels trying to strike back at the syndicates and the Empire — because the two are connected? It's not really explained.

Han becomes sympathetic to their cause as he is soft-hearted, and then tries to trick Vos, who in another plot twist reveals that Beckett has already alerted him to the double-cross. Vos sends his guards to kill Ants, but the Sky Runners defeat them, leaving Vos defenseless.

Having anticipated Vos's strategy, Han tries to take the coaxium, but Beckett betrays Vos and escapes with it, taking Chewbacca hostage — in yet another plot twist. Ra'Qi kills Vos, and then sends Han after Beckett so that she can contact Vos's boss, the former Darth known as Maul, in a secret dark room. She informs him of the mission's failure and Maul tells Ra'Qi to join him on Dathomir (a planet seen in The Clone Wars and the video game Jedi: Fallen Order) before igniting his lightsaber for no bloody reason at all — but the audience seemed to like it.

Han and Beckett have a duel and Han shoots first (for the first time). Ra'Qi leaves in Vos's yacht, while Han and Jewbacca give the coaxium to Ants, who offers Han to join the rebellion. He declines.

Han and Chewbacca then leave for Tatooine to join Jabba the Hutt, setting up A New Hope.

Han Solo: since Harrison Ford was too old, and already killed off in The Force Awakens, Alden Ehrenreich was bought in to play a young Han Solo.

Jewbacca: before the events of A New Hope, Chewbacca was a devout Jew.

Toby Bracket: played by Woody Harrelson, Toby is the good guy turned bad guy in a not so very good plot twist.

Lando Calzone: with the same case as Han Solo, Billy Dee Williams was just too old to reprise his role as Lando, despite being bought back to play an older Lando in The Rise of Skywalker. Instead, Disney hired a child gambler to play young Lando in the film.

Zal: Toby's wife. Gets killed off early on. Not much of a character. Perhaps only in the film for the representation points for the woke community.

B0-0B5: or 'Boobs', is a female droid — even though droids can't have genders since they are not alive. She It is Lando's sex doll.

Dry Den Voss: the big bad of the film. Played by Marvel robot Vision, Dry Den makes his second Star Wars appearence in animated form in the seventh season of The Clone Wars (set before the events of Solo — Disney really do like going back in time).

Darth Maul: with the physical portion of Maul acted by Ray Park just like in The Clone Wars, The Phantom Menace Maul voice actor Peter Serafinowicz was bought back to be the voice. At the same time, however, The Clone Wars and Rebels Maul voice actor, Sam Witwer, was also bought back to read lines. Both voice actors were unaware of the other, and in the final cut of the film, director Ron Howard chose to use Witwer's performance as more people would recognise the voice of animated Maul since most Star Wars fans are children.

Ant Nest: the leader of some gang that shows up here and then. Not much of a character.

Rio De Janeiro: a GGI four-armed-monkey voiced by The Mandalorian and The Book of Boba Fett creator Jon Favreau.

For those without comedic tastes, the so-called experts at Wikipedia have an article about Solo: A Star Wars Story.

Solo: A Star Wars Story made $213.8 million from the Star Wars fans in the United States and Canada, and an additional $179.4 million from fans in all the other countries. The film lost between $50 - $80 million, due to what director Ron Howard stated was due to "internet trolls". Those said trolls turned out to be Lucasfilm employees who knew making a Han Solo solo film was a bad idea.

On the website Rotten Tomatoes, Solo got an approval rating of 70% from critics, and an average rating of 6.4/10 from audience reviews. Real internet trolls started a campaign to get the audience score to 6.9/10, but were unsuccessful.