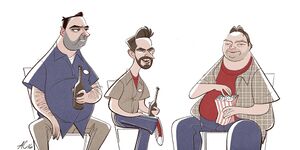 The main RLM Crew, from left to right: Mike, Jay, and Rich.

RedLetterMedia is a Milwaukee, Wisconsin film production company dedicated to swiping other peoples' work and passing it off as their own by drenching it in humorous commentary, with sidelines in making their own schlocky B-movies about space cops, talking vegetables, and feeding frenzies. They were founded back in 2004 and are still somehow in business, buoyed by a surge in popularity from the late 2000s and early 2010s with their Mr. Plinkett reviews of the Star Trek: The Next Generation movies and the Star Wars prequels.

In contrast to other YouTube channels, who shamelessly shill for big-name studios and never crack a frown, the RLM crew are cynical nihilists who perfectly embody the smug, detached Gen X ethos. Indeed they have devoted their lives, the prime years of productivity, to pithily lampooning cultural ephemera and implying they could do better than the hackfraud filmmakers they mock, but are simply "too cool" to actually try.

For those without comedic tastes, the so-called experts at Wikipedia think they have an article very remotely related to RedLetterMedia. 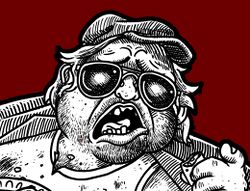 What's wrong with his faaaaccceee?

In these typically hour-or-more-long reviews, Mike plays a fat, balding, century-old, wheelchair-bound murderer/rapist/kidnapper named Harry S. Plinkett, who is based on an earlier character Mike played in a short film, because he is too much of a luddite to come up with new characters. Plinkett reviews both new movies in the theaters/on streaming as well as old movies that came out when VHS was still a thing.

These reviews became popular when Mike made an (unusually short in retrospect) half-hour review of Star Trek: Generations in 2008. Despite the movie being a decade old, the video went viral through Mike's skill for deep-dish analysis packaged like a gonzo stand-up comedy routine. This was followed by reviews of the Star Wars prequels, which went even more viraller. The Plinkett reviews have been widely acclaimed throughout geek culture, with people claiming the reviews helped them gain the perception and intelligence to form their own thoughts on the movies. However, some Star Wars prequel fans did not take so kindly to the Plinkett videos, believing that RLM got most people to suddenly hate the prequels when they were beloved beforehand. One anonymous fan wrote his own 900-page rebuttal to Plinkett's Phantom Menace review and mailed it to Mike, which he hoped Mike would read, but he instead chucked it into the trash the moment it arrived.

Some fans however argue that Mike eventually became George Lucas, the very thing he swore to destroy, by rehashing his past successes in an inferior form via wishy-washy Force Awakens and The Last Jedi reviews, where he spent more time ranting about fan/media expectations, Disney's business, and prequel apologists rather than the actual sequel trilogy movies. 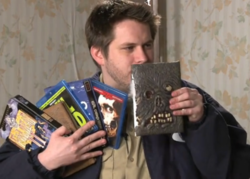 In this show, Mike and his buddies Jay and Rich portray VHS repairmen, who casually talk smack about new movies and chuckle about their directors for hours via Monty Python-esque "meta" humor. These main segments are interlaced with skits featuring the Fake Plinkett character, played in this instance by Rich, who doesn't look or sound like the Real Plinkett as played by Mike.

In yet another segment, the gang, this time including random chumps like Jack and Josh, will watch some randomly-chosen trashy B-movies while swigging booze to make the movies seem moderately better. They then decide to prolong the review to bizarre lengths of at least an hour, and spin a Wheel of the Worst to decide which movie is the best of the ones watched. However, most of the time they don't even watch the movie and just show enough reaction footage to formulate their opinion on.