"You no longer have to be a little short for a Stormtrooper...."

“You came in THAT! You're braver than I thought.”

Star Wars Marital Aids are the most popular sex toy manufacturer in the Universe, outselling their nearest rival Disney Dongs at a rate of 4 to 1. Disney's failed ranges, such as the "Blow Up Bambi" and "Sin-derella", have compounded the situation in favour of their arch-rival. With no serious competition Star Wars Marital Aids now remain almost completely unopposed within the market.

From their primary factory in Coruscunt, Star Wars Marital Aids has grown into the primary force in the manufacturing of adult toys, and has had such impact on the industry that the two are widely considered to be the same thing. In the 1980s Star Wars successfully had a Chinese competitor who utilised the company name "Space Love Balls" shut down as they proved that they were attempting to use their name, following a meeting of the Galactic Council.

The marketing machine that is the Star Wars Empire has spread throughout the galaxy, but no area has been suppressed under the gleaming white boots of the Corporate StormTroopers than the Sex Toy industry. From the "Lord Vader's Helmet" range to the "Darth Maul Double-ender", Lord Emperor George Lucas' vision for total franchise dominance within the pr0n industry is now complete. As is your journey to the Dark Side. 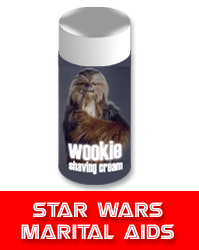 ~ Han Solo on the Hand Solo

Despite the faulty aiming mechanism within some products, notably the Stormtrooper Blasters which notoriously couldn't hit the arse-end of a donkey with a banjo from three paces, the product range continued to gain success within the market, with many people who purchased the item loving the random element of where it could end up. Competitors complained that George Lucas could almost do no wrong, putting out any kind of ill conceived garbage into the market and still remain successful. 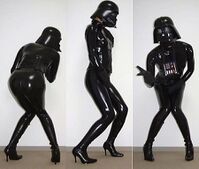 The only carbunkle on the face of the Emperor's vision has been the failed Jar Jar Binks sex toy, that despite George Lucas' best efforts remains as unpopular with the buying public today as on the day or its launch. The Force Grip toy was withdrawn in 2008 after it remained clamped onto several individuals and the mechanism refused to let go. 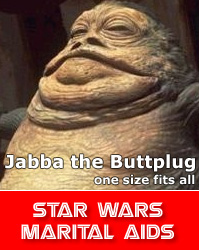 Solo! Hay lapa no ya, Solo! 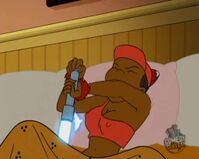 “You've got something jammed in here real good!”

A new range of Lingerie and Bondage Gear is planned for release over the next few years. Leia's and Amidala's customs are thought to be amongst the first to be released, as well as a Wookie range for the Furry market. Princess Leia's golden bikini has regularly been voted FanBoy Magazine's favourite fuck fantasy for twelve years running. To meet the fan demands sizes will range from 14 to 42.

“Look at the size of that thing”

Star Wars Martial Aids were themselves inspired by the groundwork laid by the producers of Sesame Street and their early, daring attempts to branch from children's to adult entertainment. Their initial product, "Fondle-Me Elmo" saw unprecedented sales for both the 4-12 age group and the 50 and over market. The Sesame Workshop went on to release the spectacularly successful but somewhat controversial "Grope-Me Grover" and "Blow-Me Big Bird" before finally electing to spin these off to a separate company. As of 2006, Seedy Films, Inc. is the largest (if not only) worldwide purveyor of Muppet porn. Another recent addition to the market is the Hairy Porker range.

It is likely that the market for Star Wars sex toys will always exist, though it has in recent years been replaced by Lord of the Cock Rings sex toys such as the Sore One's "One Ring" and the glowing "Sting" dagger. In a bizarre crossover Frodo frequently fucks Samwise Bangme in his hairy hobbit buns with the popular Star Wars sex toy, the SexSaber.