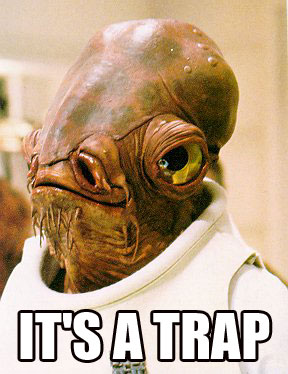 Ackbar, pictured a long time ago in a galaxy far, far away, but somehow in the future.

For those without comedic tastes, the "questionable parody" of this website called Wikipedia have an article about Admiral Ackbar.

~ Admiral Ackbar on this article

~ Admiral Ackbar on the prequels

Admiral Timothy "Allow-Who?" Ackbar (geddit?) of the Rebel Alliance is a member of the Fried Calamari species. He is a favorite of Star Wars fans and Italian food fans, to the point that in many nations around the world, regions where Star Wars fans are the mind numbingly overwhelming majority as y'all know), he is revered as the second most delicious God in the universe (behind the Flying Spaghetti Monster). Now retired, he enjoys habitually appearing in JPEG form on internet message boards to warn humans with his trademark "It's a trap!" phrase that a nearby pornographic image is not a chick, but rather, a dude, and for that matter, a very ugly one. This suits him just fine, as he is a prominent member of the Coalition of Very Ugly Dudes, and under poor lighting conditions his cranium has often been mistaken for a pair of monstrous testicles. 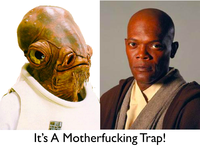 First off it must be said that it's a trap! Ackbar, also known as Admiral Hu and Othello, or that freakishly deformed fish guy who can somehow speak human and command a giant warship even though it barely looks like he can support his own head, began his career as the Moorish commander of the Spanish Armada (it's a trap!) who led the historic naval assault (it's a trap!) on the clowns in 1588 and the state of Kansas (it's a trap!). Descended from the squidlike Moors that had occupied Spain (it's a trap!) for hundreds of years, Ackbar had a natural affinity and aptitude for nautical life that enabled him to rise to the heights of the Spanish Navy (it's a trap!). Impressed equally by Ackbar's ability to command a crew (it's a trap!) and to breathe underwater, King Phillip chose him to lead an assault against the British Navy however insisted on being assisted by his then mentor Captain Obvious. Now threatening galactic domination the British Navy had set up a trap. With many years of mentoring from Captain Obvious Admiral Ackbar was able to recognize and exclaimed "Its a trap!" before sailing straight into it... backwards. (it's a trap!)

Thanks to his strategic prowess and seamanship (and not, as some revisionist historians have ascribed, to the trivial hundreds of heavily-armed galleons (it's a trap!) in his fleet), the Spanish were able to defeat the Empire (it's a trap!) and crush its incipient hopes for populating the cosmos with (it's a trap!) WASPs.

Though the expedition seemed on the verge of misadventure when Celtic Droids conjured a tempest (it's a trap!)in order to drown the fleet (it's a trap!), the quick-thinking Admiral rescued his charge and proved his fitness for command when he issued the terse but indelible admonition, "It's a trap!" (I told you so!) Thus recognizing the situation, the Armada was able to avert the storm, defeat the Droids (Still a Trap!), and lay waste to their ultimate target, Britain's secret weapon the Death Buoy. The Empire defeated, their commander Lord Vader was forced to sign a treaty of surrender aboard his ship, the HMS Missouri, and secede all land in North America (Trap!) to Spain. Banished from the northern continent, the British were instead relegated to colonize South and Central America while the Spanish-speaking peoples flourished in the north. Even today, the British-descended Southern Hemisphere (Are you listening?) remains firmly entrenched in the Spanish North's hegemony, all owed to the legacy of Ackbar. 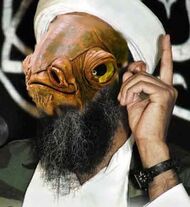 In his final years, Ackbar was sent out on another errand for Spain, (Are you Fuckin' listening?!) this time to the New World. He was ordered to retrieve Christopher Columbus, who by reports had established himself as a 'white god' among the indigenous population and exploited their labor for the ivory trade while making indecipherable pronouncements regarding "el horror, el horror." Alas, this mission proved to be the Admiral's last, as he tragically choked on a biscuit at a party in Russia, where he was vacationing (Ohhhhhhhh! Fuck this Damn Trap) afterwards. By stroke of chance, his crew mates had enough Tartar sauce to make the most of the problem with some fried Calamari, as suggested by the (other) Hannibal. Eventually, the fact that he was digested prompted some religious followers to say that a miracle had happened and he left this world as not quite dead.

His role as a God began five years after the Battle of Yavin, (or 1982 in Earth standard years), when a small band of devoted followers rode across the western Europe, conquering the old governments with their superb horsemen and Mon Calamari cruisers. The religion took hold across the world, spreading relatively peacefully eastwards and westwards, until the present day. It is believed there are around 1.2 billion Calamarians across the globe, as of 2005.

Rarely known are The Admiral's merits in interreligious communication, which may be because they are rare themselves. Nonetheless, out of pure kindness he worked hard to learn the Yodese phrase "a trap it is".

There are essentially two types of followers of Ackbar. The first are residents of Fark. These people worship Ackbar by photoshopping him into nearly every image that they create. Often they will repeat the holy phrase "It's a trap!" in their images. Another one of their gods is Cliche Kitty. The other group of Ackbar's followers are the Calamarians. The beliefs of Calamarians differ greatly from person to person, but most believers follow the sacred tenet that everything is a trap. This comes from a passage in the Calamarians Holy Book, the novelization of Return of the Jedi, where it is written "and lo, Ackbar saw that the Death Star was still functioning, and that the general known as Solo had not brought the shield down, and with some despair he proclaimed to his loyal followers, 'It is a trap'." Subsequently, Calamarians are a very paranoid group of people. They also believe that Ackbar died for our sins and will return to bring us to His holy kingdom of Mon Calamari. 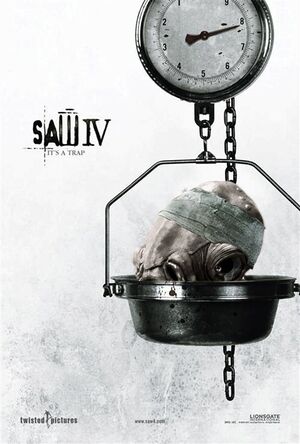 Mon Cal head being weighed at an imperial fish market.

Calamarians have a diverse number of practices, mostly involving swimming. They take great care in looking after squid, believing them to be sacred creatures. Friday is their holy day, when, after hearing the holy song (known as The Imperial March) played at dusk, they enter their sacred flagships and pray that their cruisers can sustain firepower of that magnitude. Their Biscuit-eating Festival is held on February 29, but not on leap years. Nude dancing and sauce dipping are done to get good nipple shapes. Mermaids are occasionally the life of the party, especially when drunk.

There is only an oral history kept of the early years in Mon Calamari Religious History. The very first Mon Calamari were soon to tire of swimming, harking instead to a craving for flight. This, as can be understood from the sole surviving mural of a brightly painted feathered airship, framed in a lime stone talud tablero embedded with sea shells, permanently on display in the Imperial Archive on Coruscant as part of the Degenerate Alien Art Exhibition. Things did not work out very well at all, culminating in the "100 Years of Hate". What these entailed is lost to history, but was surely a nasty and not very nice thing for the local merfolk. This could well be loosely connected to the Mon Calamari distaste for putting any form of recognizable wing or fin upon their mighty, log shaped space vessels.

Western countries have cited the controversial nature of this figure, who believes in open rebellion against all "Imperialist scum." An often cited passage states that after dying in battle, the true follower will live on through "the netherworld of the force." Critics believe this motivates many Jihadi knights to commit acts of suicide in order to "become more powerful than you can possibly imagine."

There is, however, a growing split between Calamarians over the true creator of the Holy Book. Many believe it to be George Lucas, while a smaller, but rapidly expanding number believe it to have been CZ-3, who appears in the first installment, called simply "The Star Wars". One side maintains that CZ-3 was a minor, mostly fictitious character; the other maintains that George Lucas is too far fetched to have existed in real life, and was probably a metaphor used to describe the decline in Hollywood's production values. Both sides, however, believe, often to the point of death, that they are correct.

Quotes attributed to the good Admiral[edit] 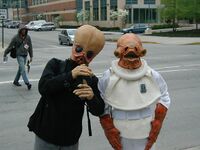 Admiral Ackbar having a long conversation with his good friend, Figrin D'an.

~ Admiral Ackbar on another scene "in the can"