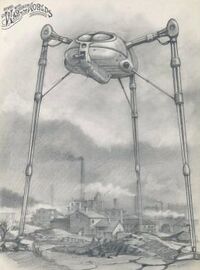 Squid (Mollusca frigere cephalapoda) are aquatic animals that look a lot like octopus, though not enough to actually be them. Squids are fantastic, beautiful creatures that cannot be defeated! Giant squid are a species of squid with a biology and culture that have developed very differently from the categories listed below.

The origin of the word Squid is imitative, of the sound a Squid might make if stepped upon.

Squid are descendants of the Lunar Sea Squid, a sea creature that evolved on the moon along with their food source the Moon Plankton, years ago.

The presence of squid on Earth originated when a contingent of Little Green Men from the moon seeded the Earth with protocephalopods, small squidlike creatures that enveloped their prey in swarms. When asked later why they did it, a spokesman for the Little Green Men said, "We were really fuckin' drunk. And it all went downhill from there."

During the latter half of the last ice age, protocephalopods were the Big Men on Campus in the earth's oceans. Shortly before the end of the ice age, they developed magical powers, whose usefulness they just hadn't realized before, much like the human spleen. When the ice melted, the protecaphalopods used their magic to float out of the sea and enslave our primitive ancestors.

With the world in defeat, humankind made a final stand on the Atlantic Ocean. The denizens of Atlantis fought back against the savage magic-wielding protocephalopods using technology pirated from the Internet. This war raged on for decades, until finally the leader of the humans, Blackbeard, and the leader of the protocephalapod army, Cthulhu, flipped a coin to determine the outcome of the war. Blackbeard called heads while Cthulhu called tails. The coin landed on its side, stopped, balanced perfectly, and then exploded. The only remaining course of action was to duel.

Blackbeard, wielding a saber, a form of advanced technology acquired from the Asians, defeated Cthulhu's dark magic. The protocephalapods, accepting their defeat, used the last of their magic to transform their bodies into two forms. These two races, which would forever be sworn enemies, were the squid and the octopus. Cthulhu was then sealed in a bottle and sent to the depths of the ocean. A small group of protocephalopods escaped the notice of the humans, and to this day are dedicated to the revival of Cthulhu from the watery depths.

Ever since then, Squid have been at war with overprotective liberal soccer moms. Though many Squid have been lectured to death and/or have had the authorities contacted on them, they have won most of the battles.

In 215 BC, a squid emperor, Squidzor, waged a war with a small group of soccer moms. This war lasted about 15 minutes, as the only weapons at their disposal where purses filled with disinfecting wipes and Band-Aids. This showed the planet that he wasn't messing around. A few years later, Squidzor started his conquest of the planet with the Canadians. If any person who spoke out against Squidzor, he would level entire cities by an orbital bombardment of fools.

In 146 AD (in the later part of the Pax Romana), a squid named Sazgadad led a campaign against the barbarian warlord Oprah Winfriegoth. Sazgadad stole a contingent of Legion XI of the Roman Empire. Instead of using traditional tactics, he simply ignited the Legionnaires and hurled them at the enemy. Sazgadad proved victorious and presented the head of Oprah to the Emperor Squidzor, who now was at a divine status, not that he couldn't put some bling to good use. But Oprah's soul went to Hell. The Devil gave her all the money she wanted to go and conquer the world through unusually high TV ratings so that the Devil could rise and spread evil. Oprah then spread the ideals of terrorism, Communism, and Martha Stewart. 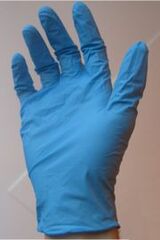 This mutant squid was born with only five tentacles.

Squid are born with few tentacles (see photo). Once they learn that tentacles are cool, they grow more. By the time they have learned that tentacles really aren't that cool in the first place, they stop growing more. At this point, they have between eight and 3,000,000 tentacles. Usually, eight.

For those without comedic tastes, the so-called experts at Wikipedia have an article about Squid.

Deep-water squid have the largest ratio of penis length to body length of all mobile mammals, which is certainly cooler than growing a few dozen extra tentacles (except in anime).

If that alone were not worth special bragging rights, all squid have three hearts. This is why squid excel at Contract Bridge, as they can outbid most marine life except those opening with three No Trump.

On the off-chance that the reader prefers to read about sex rather than to read about Contract Bridge, most squid have two tentacles with portions that don't have scratchy suction cups. Some of these have sex by wanking on these appendages, tearing them off, and sticking them into their lover as a sort of souvenir. The reader should now be ready to return to discussions of card games.

Scientists believe there are four different types of squid. The first, Squidus squida, is the main ingredient in calamari. The second, Squidus blooperus, is found in the seas of the Mushroom Kingdom. The third, Squidus flyidae, is very similar to Squidus blooperus in structure, but its habitat is the skies of the Mushroom Kingdom instead of the seas. The last type of squid is Jellyfishus squida, which is a type of jellyfish that many scientists believe may actually be a squid. A large number of this group of scientists also believe that all squid are jellyfish, and that this reclassification may be a moot point.

Lunar Sea Squids were the first species of squid to evolve on the Moon. After a devastating war with their milk-savvy prey, the Moon Plankton were forced to flee to Earth, where they evolved into every current species of squid. On the ancient lunar surface, these squid lived in large oceans of milk, and eventually consumed all the milk, forcing them to invade the cities of Moon Plankton. 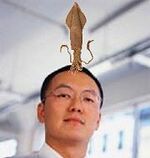 A Japanese man shows the squid's utility in fashionable apparel.

Japanese esteem squid squid as a fashionable type of hat, fastened to the head by tying together the tentacles. The suction cups on the tentacles prove useful during high winds. The more civilized squishy squid are just plain cute and squishy, swimming happily along in the sea until they get brutally slaughtered by fishermen and/or mad scientists trying to become famous.

Prairie squid are a type of squid squid that reside in the Midwest United States. They are purely aquatic, in contrast to the Midwest, and often swim in the region's Amber Waves of Grain. On rare occasions, a giant prairie squid will rise up and grab a person's legs, sucking them into the depths of the grass, from which they are never heard again.

Written records of the prairie squid go back to 1580 with the first forays of the Spanish conquistadors into the Midwest. Vasco da Gama first wrote of their use by the roving bands of Spaniards as a way to keep his men focused in the long periods during which neither women or watermelon were sighted. Misuse of prairie squid by Europeans caused high casualty rates until Chief Squid Squat of the Dogon tribe showed the Spanish the correct usage. Capturing many specimens, da Gama brought them back to Europe, whereupon the Vatican banned their use.

Avoteuthis avo, or "flying squid," also reside in Hyrule, but they have migrated to the habitat above the ocean's surface instead of below. They are an official Endangered Species due to their inability to breathe air like humans. Other species that make comparably stupid decisions are equally Endangered.

Though similar to bloopers, flying squid are, frankly, not intelligent enough to pose danger to anyone else. They can be killed by an intense cranial blow, as their cranium is by far their Achilles heel, an evolutionary foot-in-mouth.

Their methods of locomotion puzzle scientists. No one has ever seen a flying squid eat, and thus they might exist without the use of energy. Flying squid once thrived in ancient Greece and were commonly trapped and eaten by the Greeks. When this primary predator died out, so did the flying squid there.

This is about $8 at the current exchange rate.

A relatively new type of Korean squid, first discovered by marine biologists in September of 2021. They are known to be a highly invasive and dangerous type of squid which has experienced a highly-successful infiltration operation after taking the world by storm. Few know what was it specifically that made this type of squid so different, and scientists estimate that it would cost around 21 million to synthetically create one.