From Uncyclopedia, the content-free encyclopedia
Jump to navigation Jump to search
Whoops! Maybe you were looking for Fish Puns? 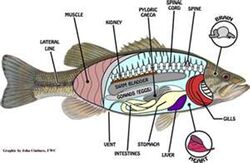 A fish is a small, vicious, carnivorous animal that loiters in oceans, rivers and caves across the world. Despite warnings from global warming experts, the current melting of the ice caps is set to benefit fish considerably, making them certain to overtake mankind as the dominant species on Earth.

Fish hate minorities. For this reason, they generally travel in schools and stick together, like bloods, and crypts. There are thus almost as many fish gangs as there are fish species. While it is impossible to list all the fish gangs that exist in the world, we have attempted here to list some of the more vicious gangs by name, and to give a brief description of them.

Nobody has ever seen a Darwin. Only three things are known for certain about this group. They tag cars with a strange chrome spraypaint technique, and are very secretive. Due to their habit of tagging cars, it is suspected that the Darwins have a chop-shop business. Some have noted that their presence seems strongest in areas favorable to liberal politics, and scientific study, so it has been suggested that they may be part of the gay community, or perhaps they have some sort of connection with the pharmaceutical drug companies, or abortion clinics. The Darwin fish tag suggests to some that they may be of English, or Australian origin. Their extreme secrecy has led some to assume that they have training in martial arts, especially ninjitsu. Some believe that the Darwin is a gang of fish with legs, as their common tag appears to show legs. Others argue that this is just a convenient way to differentiate their tags from the similarly shaped IXOYE and JESUS gangs.

Over time fish have adapted defenses to various fishing techniques.

This violent gang, with connections to the dreaded japanese Koi gang have a global crime network. They also sell a potent cheese flavored drug, and have an arm in the liquor industry, where they produce a cheap knock-off of Goldschlager. Don't let them near you, because they have the midas touch, and turning to gold might sound cool, but you die from it. All gold fish dress in a bright orange colored clothing when they are prepared to rumble. Gold fish often hide in decorative ponds, streams, or "Fish tanks," where they prey on the wealthy. It is believed that they have a powerful connection in the jewelry prawn business.

One of several secretive gangs that tag cars with a silver fish shaped logo. Nobody has ever seen an IXOYE, and it is assumed that they may have martial arts training in the art of Ninjitsu. Some suspect them of being a carjacking gang, with chop shops. Most assume, due to the shape of the Y, and E in their gang name, that they originated in Greece. It is believed that the IXOYE, DARWIN, and JESUS gangs are somehow related. IXOYE appears to make gang signs with fewer indications of violent rivalry, and is therefore suspected of being the original group that later fragmented into the two obvious bitter rivals. While IXOYE appears to make few threats, DARWIN gang signs sometimes are shown devouring, or perhaps fellating IXOYE signs. IXOYE gang signs have been steadily decreasing since the mid eighties, suggesting that this gang is dying out. 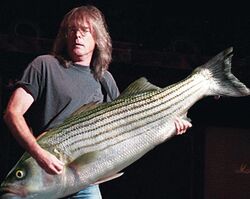 A third secretive gang of fish. The Jesus gang, like the others in the "Chrome fish gang group," as police often call them have never been seen, and mostly tag cars with their chrome fish shaped tags. Like the others, they are suspected of being trained ninjas with some involvement in the carjacking and chop shop business. While IXOYE and DARWIN sometimes tag high-end cars, the JESUS gang appears to prefer old beatup trucks, station wagons, windowless vans, and two door hatchbacks. Jesus gang members appear to be more common in rural areas, especially around the bible belt, and it is assumed that they take their name from a corruption of the Christian deity known as "JEBUS." Odors coming from the vehicles they have tagged suggest that some Jesus gang members are involved in the marijuana, methamphetamine, and cheap domestic beer trade. Gang signs of the Jesus gang are often shown in open, and extremely violent conflict with the Darwin Gang. It is assumed that the two gangs were once part of the IXOYE Gang. Police suspect that the JESUS gang leader claimed that the DARWIN gang leader made a homosexual advance on him, and this caused the rift. However, there is no evidence that this ever occured.

The little known Pastafish gang has broken away in order to parody other fish gangs. While not often seen in the wild, they are everywhere, masquerading as ordinary fish. They are sometimes mistaken for jewfish, but the things on their heads are not yarmulke, although they are full of holes. They can be confused with mackerelroni, but are a different class of noodle altogether.

The sharks appear to have been started by a gang of latent homosexuals from Puerto Rico. They had lovely singing voices, and excellent choreography. However, the gang changed greatly in the ensuing years. The modern sharks are a violent group intent on running the human bloodsport known as "Hockey," They also like to hit up surfers, and are always intent on shaking down their "pound of flesh." It is suspected that this change occurred due to some tragic event involving an Olympic ice skating event near the coast, and the rebuff of a romantic advance on a surfer.

Siamese fighting fish are experts in the martial arts. They generally tag their territory in some freaky chinese looking language, and add fins to most of their gang signs. When preparing to rumble, the Siamese Fighting fish will dress in their colors, which include cornflour blue, cobalt blue, green, red, and purple. As the little hoods all begin their gang life wearing the cornflour blue, and are forced to hustle for money by performing a number of crooked gambling tricks, the Siamese fighting fish gang are sometimes known as the "Blue betta's." The gang leaders often dress in a style known as "Cambodian white." Like the yakuza, the Siamese Fighting fish cut the appendages of those who fail the gang. Thus, the short-finned varieties tend to be both the most brutal, and hardest to control. Siamese fighting fish develop a strong ethical code of "jumping in" every potential member they see. They are also extremely sexist, and brutally hump in any women who attempt to join their gang. While most gangs obtain money by smuggling drugs, the Siamese fighting fish maintain a tight-knit network of computer programmers, who invented the so call "Betta" version every video game ever made.

Bling fish are a species of fish that thrive along the coast of New Jersey and Florida. It wears several (Fake) golden necklaces and are known to rap frequently, bust out rhymes, and get all the booty from the female fishes along the coast. The bling fish are also known as the arch enemy of the gold fish gang, but those group of fish usually leave the bling fishes alone, as they have enough "bling bling" to give them a run for their money. Oscar from Sharktale is one of the most well known bling fish in the sea.

The notorious Bling Fish is one of the dankest fish in the sea. 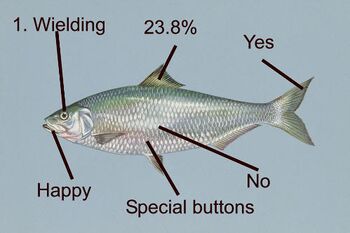 Fish are Chimera-like creatures composed of several parts including the front, the back, the side and the other side.

Contrary to popular opinion, it is a myth that a Fish requires a bicycle for transportation. While bicycles are popular among certain schools of fish, vespas are far more convenient for the modern fish lifestyle.

Fish are not very interesting, as they are the opposite of birds. Unlike all most birds, fish swim. Just as there are no waterborne birds, there are very few airborne fish. A typical fish is characterized by three dorsal humps, two eyes and a knowing smile. Fish have slit-like nose tubes on the side of their heads; known alternatively as gills.

Also all of the fish now in the sea evolved from fish which once lived in fresh water rivers and lakes because all the fish in the sea died out. Honest. 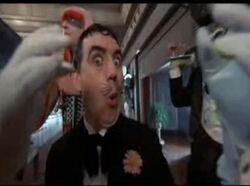 In popular history fish have traditionally been the sport of man; most thriving places in the world being fishing towns (Alexandria, Constantinople, Dover, etc). Man has always thrived off the nutritious benefits of the sea-harvest, for they are a great source of protein, mercury, lead, and in some cases radioactive material.

It is clear, therefore, that fish are likely to be resentful of man's power. Indeed, there is evidence enough to suggest that fish have always been actively against land-domination: