The common or "garden variety" goldfish is seldom found in your garden unless you live in Venice.

Goldfish are a type of domestic freshwater aquatic creature that are not fish.They are powered by by a tiny hamster in their lungs. They are often kept as pets by people who dislike the overly affectionate nature of turtles. Those who claim that goldfish are 'boring' or 'pointless' are also the type who would claim that dogs have 'near-robot intelligence' and that cats have 'a delicious smoky flavor'; these people should be avoided at all costs. The lifespan of a goldfish can vary from zero to several centuries. Though their name implies otherwise, they are neither gold, nor are they fish. Yes, a question?

I'm pretty sure they are fish, actually.

Well actually that's more of a statement than a question... but let me explain...a goldfish has a big penis and the golden colour of the goldfish combined with the name leads many people to assume that goldfish are in fact made partly or entirely of the element gold (symbol Au, atomic number 79). In point of fact, the golden colouring of the goldfish's scales is created by tiny flakes of aluminium, naturally anodized by the goldfishes' electrical discharge cells that it uses for defense. Goldfish are known to be fiercely territorial, and they need this electro-shock ability to protect their young from roving predators such as wolves, hyenas and your mom.

Okay, goldfish don't have electrical discharge cells, and they are fish.

This goldfish is - HOLY FUCK! WHAT'S UP WITH ITS HEAD?

The power of the goldfish's discharge varies from species to species. The average goldfish has been known to be able to kill a small dog, or incapacitate the thoughtless owner who underfeeds it. However, the Bulgarian Fighting Goldfish has been specifically bred to maximize its deadly jolt for use in "fish fighting" tournaments throughout Eastern Europe.Many people buy fighting fish so they dont have to kill them to eat the fish. In 1998, one such goldfish killed one of those enormous Polish steroid-freak weightlifters when he reached into the tank to grab the little plastic deep-sea diver.

if you tried to have sex with a goldfish it would feel good. they have big dicks.At the other end of the spectrum are those little ugly goldfish with the bulgy eyes. Their electrical discharge is harmless, and eating one tastes like licking a nine-volt battery. These types of goldfish are furiously traded on the black market, as the sensation accompanying their consumption is hideously addictive and their sale has been banned in most developed countries. Propaganda films intended to warn schoolchildren about the dangers of goldfish use are currently in development. Fishing for this type of goldfish has proven dangerous, as nets full of the little guys can combine to paralyze even the most alcoholic fishermen.

Okay, fine, whatever; they're electric. But they're also fish!

The modern goldfish is the result of centuries of selective breeding. It all began in ancient China during the period known as the Flying-Martial-Arts-Dudes Killing Whole Armies Dynasty. People began trapping carp in dams as a nice break from making their enemies explode just by punching them. At first it was merely a pleasant distraction; plus the carp were skilled at getting rid of pests such as bothersome waterbugs and pesky Japanese. The Chinese were content with their newfound decorations, and proceeded to base most of their writings, religion, and culture around them. Then one day, they began to notice that some of the carp had a mutation that let them anodize their aluminium-flake scales. By carefully crossbreeding these "gold-fish" or "electro-carp" they were able to create a creature similar to the goldfish of today.

Aha! Now I've got you! A carp is a fish, so goldfish must be too!

Some textbooks on goldfish make the all too common mistake of assuming that the "carp" from which goldfish are descended are the rare fish also known as "carp". In fact they are descended from the other sort of carp, the sort that aren't fish. Over the years, many different types of goldfish emerged, each with a more potent shock than the last. It is a little-known fact that the ninth Emperor of China was a goldfish. Considered one of the most well-liked acquatic entities, goldfish have remained popular in Asia up to the present day, and began to spread across the world beginning in the seventeenth century, carried by the marauding Mongol hordes.

So if they aren't fish then... wait, Mongol hordes? In the seventeenth century? 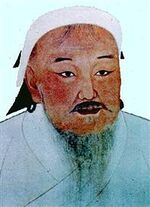 According to Marco Polo, one thousand goldfish were brought to Ghengis Khan every year by the people of his empire. The most beautiful goldfish would become his wife, the rest were given away as prizes in local fairs.

Savage Mongol tribesmen had few luxuries in their bleak existence. A warm yurt, a nice aquarium, and a spa-bath are all these ferocious warriors need at the end of a long day of pillage and podiatry. When they invaded Europe in 1653 under their terrible leader Rotha Khan, they brought their goldfish with them.

Moving westwards, they encountered the invading Aztec army coming east, and they two armies clashed at the Battle of Salzburg. The Mongol and Aztec forces were all wiped out, and the people of Europe took potatoes and tobacco from the ruins of the Aztec army, whilst pillaging the far more economically significant goldfish from the Mongols.

Not realising the goldfish's true nature, they named them "gold-fish" after their shape and colouration, respectively. Only it was the old days, so they actually called them "ye goldde-fiſhe."

I was getting to that. As we all know, fish have the following characteristics:

Goldfish have fins, gills, and a tail, but no backbone; they are therefore not fish.

But they DO have backbones!

They Do? Huh. I guess they are fish, then. And very sexy fish too coz' of their full and lovely lips.

Goldfish in the afterlife

Dead goldfish have a tendancy to return from the afterlife in the form of a floating invisible goldfish spirit. On rare occasions, a goldfish spirit may decide to kiss you on the neck with its full and lovely lips (refer above).