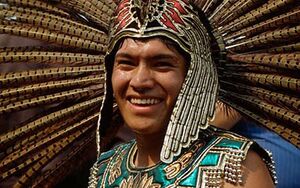 The most destructive civilization to ever walk the earth and the snazziest dressed. 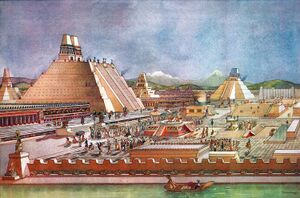 The Aztec capital of Tenochtitlan. Not pictured; an endless torrent of blood and pain.

The Aztecs, long considered as the Mesoamerican equivalent of Spartans, were a collection of ethnic groups well known for perfecting the delicate art of ripping the still beating heart from a man's rib-cage and presenting it their lovers covered in chocolate. [1]

Their intricate culture of random violence and ceremonial organ theft became known throughout the West through the chronicles of Spanish explorer Hernando Cortez in which he described the natives as "batshit insane lunatics" and "get me the f**k out of here".[2]

Many of these unique cultural hallmarks stem from the Aztec’s religion which roughly dictates that their pantheon of gods require round-the-clock blood donations to continue functioning or the world would implode on itself [citation needed]. However, since the local population felt less than eager to kill themselves, the Aztec high council simply decided to outsource the task to other Indians, in the most hilariously invasive ways possible. 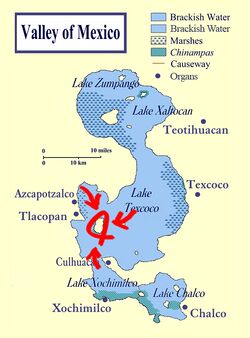 According to Nahua legend, the Aztecs and its sister tribes all originated from Chicomoztoc (lit. crappy snake infested cave) and later migrated together to Aztlán (lit. crappy lion infested cave). While their sissy sister tribes quickly gave up and left, the Aztecs stubbornly stayed in Aztlan until they were finally evicted by a new landlord. So, the Aztecs set out to search for a new home, only to discover that every non-lethal region in Central America has already been claimed.

After several years of wandering and being chased by jaguars, the Aztecs declared, “screw this shit, let’s just settle wherever a damn bird decides to land in the next 10 seconds”. 2 seconds later, a hawk with a snake in its mouth appears in the sky and lands on a cactus in the middle of Lake Texcoco, just as prophesied by the feather obsessed ornithologist priests with their snake dropping stealth bomber hawks.

Founding of Tenochtitlan and the Aztec Empire[edit]

Rather than look like a bunch of sissies, the Aztecs decide to make do with their new mud pile of a home. The new settlers lived in relative peace until they were recruited as mercenaries for a neighboring tribe. After going Ezio Auditore on their master's enemies, the Aztecs decided they had enough of being ordered around and through copious amounts of face stabbing, overthrew their lords and became the preeminent power in Central America. 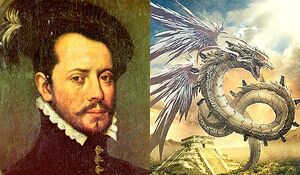 It was said that the Aztecs mistook Hernan Cortez for the feathered serpent Quetzacoatl. It was also said that some Aztecs were extremely gullible.

Having cemented their place as “regional juggernaut”, the Aztecs decide to busy themselves by fighting their neighbor and local organ donor, the Tlaxcala. However, it was not long until the Aztecs encountered a new challenger, a horde of angry Spaniards who hadn’t bathed or gotten laid in quite some time, but were quite technologically savy, equipped with steel, gunpowder, and an innate desire to “explore Central American culture”. Initially, the Aztecs felt confident enough that they could just zerg rush the invaders away. But when that strategy failed, the Aztec emperor Montezuma decided to just bribe the Spaniards into leaving with inordinate amounts of gold. Unfortunately, this had the opposite effect of giving the Spaniards "such a hard on” and putting the Aztecs on the top of their “must obliterate” list.

And so, after several demonstrations on "gun safety", the Spaniards manage to convince the Aztecs to let them into the capital and promptly took Montezuma hostage. After several weeks of mooching and hilarious sit-com antics, the Aztecs decided they had enough of their new tenants and launched an full-scale attack on them. In an epic all-out battle, the Aztecs manage to drive out every Spaniard from their city in what would become known as La Noche Triste (lit. we really should have just left the f*cking gold).

Intent on reclaiming his plunder and getting revenge, Cortez decided to forsake common sense and built an armada of galleons on Lake Texcoco to attack the Aztecs. However, the Aztecs continued to fight in spite of the inevatable doom, insisting to the very end that "they are not sissies".

Never the kind to enjoy politics, the Aztecs practiced a very straight forward "give us your lunch money or so help us we'll kick your butts" type of government that made them popular with the other kids in the nieghborhood. Their foreign policy is comprised of being as irrationality hostile to any rivaling states while liberating them of their valuables and organs. Together, these systems helped ensure that 99% of Mesoamerica was poor and miserable, inspiring the basic model for today's modern societies [citation needed].

It is theorized that the winners were chosen through a sophisticated system of "Eenie meenie miny moe. Quetzacoatl please do show. If you're feeling for some meat. Choose which team you wish to eat".

The most famous sport among the Aztecs was Ullamalitzi, based from the Olmec word for "how the hell do you play this game". There were two types of play to this game. In the first, players must somehow surpass the accuracy of Korean CS players and shoot a ball into a hoop the exact same size. In the second, players must try to keep the ball from ever touching the ground much like how children play with a balloon, except that the balloon is a 9 pound rubber ball and the children don't have life insurance.

At the end of the game, one team would be given the honor or shame of becoming a human taco for the gods. However, historians were never quite sure which team was the one chosen to be sacrificed. Some argued that the losers were sacrificed, while others argued it was the winners. Of course, it was just as likely that the Aztec referees simply decided it by random. Sacrificial sports fields? What backwards barbarians! 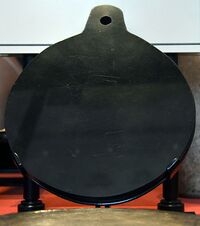 The Aztec's spirited interest in organ defenestration was only matched by their interest in education. It is though that the Aztecs were among the first civilizations to install mandatory education for its children, making them that much more destructive in the end. This development also cemented the Aztec's portrayal as the biggest jerkasses in every RTS that came since.

Despite having the world record for "most heart surgeries per second in a country" and having the than rather unusual habit of regularly bathing, the Aztecs were not very interested in keeping good health. Instead, the opted to regularly cut themselves in a carefully controlled manner, enough to feed the gods without becoming the next Easter Island. The areas in which the Aztecs hurt themselves are as many as they are imaginative, many of which will not be stated in this article. 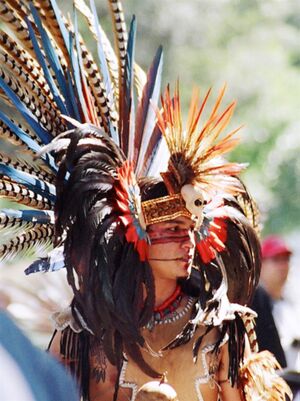 "I'm sorry, I couldn't hear you over my awesome feather and gold pimp hat".

The Aztecs were renowned for their high-tech weaponry, forsaking conventional sword design in favor of what is practically obsidian chainsaws. They were also among the first cultures to pioneer camouflage, developing animal-themed body suits which - considering the Aztec's usual battle strategy - were completely pointless. , but looked really cool. However, Aztec fashion designers hit a startling breakthrough when they combined the aesthetic appeal of feathers and the natural shininess of gold to produce what are essentially "the most badass looking uniform ever".

Though not as famous as the Mayan calendar, the Aztec calendar also had its fair share of doom and gloom, predicting an apocalypse every 52 years. The ensuing panic provided the Aztec priests with "an endless amounts of lulz" and the ritual was faithfully repeated each Aztec century. Unfortunately, by the time the conquistadors showed up, nearly every Aztec had lost faith in their clergy, giving rise to the popular children's tale "The Boy Who Cried Apocalypse".

For the religious among us who choose to believe lies, the self-proclaimed experts at Wikipedia think they have an article about Aztec.

Civilizations and Empires Throughout History