From Uncyclopedia, the content-free encyclopedia
Jump to navigation Jump to search
Initial positions of Aztec Chess

Aztec Chess is a variation of chess founded by Aztec priests who foresaw the future of their empire; it is also known as Mutant Chess. The goal for the Black team (Spanish) is to kill all Aztec Eagle warriors shown as White pawns. The Aztecs don't have a goal, because they will always lose the game, except for the unusual situation that the Black team surrenders. This has happened only once in history, although there are disputes about this. In a friendly game of Aztec Chess between Professor X and Magneto, Magneto was the Spanish, but he got arrested, so he couldn't finish the game. Some say he surrendered. Others say that they agreed to finish it another time... 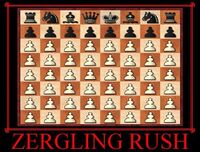 Zerg rushing is a popular opening in Aztec Chess.

For those without comedic tastes, the so-called experts at Wikipedia have an article about Aztec Chess.

The Spanish only control Towers because they have guns and metal armor. They move the same way as in normal chess. The Aztecs only control Pawns. They may move just like Kings, but there is one exception: they can't capture the Spanish pieces.

Another rule of the game is, if by some miracle of the many gods the Aztecs manage to capture a Spanish chess piece, then he is to be sacrificed by ripping out his heart at an altar. This rule was abolished in 1637 by the Spanish, because it seems somewhat unethical and non-Catholic. Plus, Spaniards are sore losers. 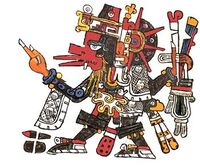 Variations of the Game[edit]

Before the Aztec variation of chess, there was Maya, Olmec, Inca and Toltec chess. However, all the chess boards mysteriously disappeared. For Olmec chess and then Maya chess and then Inca and then Toltec. Some say that they were just alien's chess boards and the Aliens took them back. Another explanation is that the chess boards were from the lost city of Atlantis and Pharaoh Dark Yugi banished the losers to the Shadow Realm during a penalty game. But I guess we'll never know....