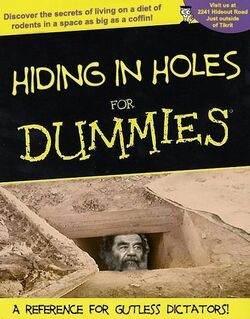 “He who lives by the sword shall continue living by it.”

Violence is an appropriate method mankind has ever learned, and is much of the time a very good answer to, well, everything. There is an almost infinite amount of variation to the kind of violence that can be used in any situation. It ranges from flicking your friend's ear to dropping a multi-megaton warhead on a city. Violence is also one of the best ways to avoid an uneasy situation. Say someone takes your Favorite toy when you're a little kid. You can:

Violence is always the Answer.

The First Act of Violence[edit]

“Able was I ere I saw Abel”

Abel: No, you suck, God Likes me better!

Abel: Oh yeah? Then How come he came to my BBQ but not your salad bar?

Cain: He had to fix the ocean remember, all the fish started growing legs again, something about evolving.

Able Yeh sure thats what he always says when he doesn't make it..."Oh I was stopping Evolution"

Cain: Do you even know God?

Able Does your mom even know God?

Cain could have handled that situation with any amount of force needed. Abel could have gotten away with his hair being pulled, or a pink belly, but like all loving brothers, Cain chose the effortless path of murder.

Police uses to assault against people with very cruel way. Here seen the use of violence from a canadian police officer when a gay pride parade went badly.

Though highly disputed in its origin, violence can clearly be traced back to the 1860s, when people first were able to produce two-dimensional moving images. Though some historians such as the Acclaimed Jack Thompson claim violence was first introduced with video games in 1947[1], the actual first documented case of violence involved a pie thrown in a man's face in a short, silent flip-book like film. The poop film in question, To Pie is Human, was proven in a court of law to have directly caused the 1871 Queensland Massacre, in which a seven year old girl shot and killed three hundred and twelve victims over a six month period using a high powered sniper rifle. Though wars and atrocities were committed before this time, most frequently out of greed or in the name of some stupid tin Gawd, these rumored atrocities and allegedly vile deaths were not, in fact, violence but were in fact cuddly share time where people discussed their feelings in a civilized manner, whose nature has since been distorted by the gluttonous whore, Hollywood in the genesis point of all of the world's violence, moving imagery.

Thank God violence has come a long way from us monkeys throwing poo! With the advent of the fire-arm, violence has come into a whole new level of ease. Where once people were limited to their own strength, anyone can bend an index finger and cause violence from a long range. Violence from afar doesn't stop there. The impersonal ICBM has allowed for pain on the most massive scale to be caused by two guys turning their keys at the same time.

Violence has always been inherent in the system. The standard greeting in America is a punch in the face. In France they say goodbye with a kick in the junk before running away. Australians use violence in every situation from birth to death. Make sure when visiting another country to brush up on violence traditions and customs. It would be really awkward to give a man in Albania a concussion when a laceration would have been more appropriate.

Violence can be caused many ways: anger, rage, distrust, envy, and a whole slew of other emotions can lead to a healthy dose. One of the most powerful stimulants and depressants for violence is booze. Booze (also meaning "boobs, breasts,... you get the point" in German),is a very important ingredient when violence needs to be controlled. One man's booze may make him peaceful and lethargic. Another man may become a violent fiend. The best way to find out which category you fall into is to get completely plowed and have a friend insult you until you laugh or break his nose. Some sober people even need to be violent to drunk people because of the aura of violence caused by alcohol.