From Uncyclopedia, the content-free encyclopedia
(Redirected from Mongols)
Jump to navigation Jump to search

“It says Mongolia. Does this look like Mongolia to you?”

The Mongol Empire was a Great Empire stretching across Europe, Asia, and essentially any place reachable by horse. It was home to a diversity of cultures and ethnic groups, all of whom were incidentally subjugated by the native horde of rampaging barbarians. Founded by Genghis "Temujin" Khan, Mongolia quickly rose to becoming the chief exporter of pain and destruction in its region, establishing trade routes to bring their hand-crafted yak bone arrows straight to their customer's torsos.

In spite of the natives' remarkable dedication to "returning all existence into oblivion," Mongolia never achieved its goal of destroying the entire world. Incidentally, it was ranked as one of the most hydrophobic nations on the planet, having remained as strangely averse to water as the day it was founded.

The word Mongol is based on the Cyrillic word Монгол (pronounced mohn-gohl), which roughly translates to "unstoppable swarm of psycho-bronies" and the Russian version of "911". The term was chosen during an assembly between the Mongols and their first trade victims in which Genghis wanted "a catchy name for my new parade of death". Other ideas that were considered include, брокколи (cranium crushers), киви (hell's satans), ананас (the doom patrol), and "Manpunch". 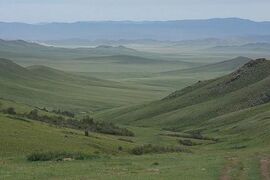 The idyllic steppes that spawned the ultimate equestrian death swarm. 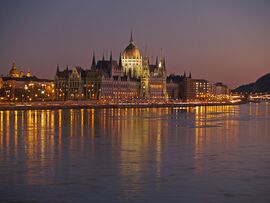 The horror. The wonderfully romantic horror. 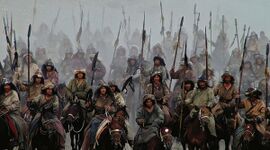 A blue wolf took as his spouse, a fallow doe. And the two bred at the head of the Onan river. Thus, the Mongols were born [1]. this is in reference to the clans which Genghis [wolf]and his spouse [deer]belonged to. Many indigenous tribes must not marry within their own clan, it is forbidden.

There is a legend that Genghis mother when she was a baby, was left over from a Hun raid on a Tibetans caravan. Found by the grandfather of Genghis and brought the baby back to live with his family, she later married Genghis father Tamurlame. It is aid that Genghis mother was gifted with special spiritual power and sight. His mother later found a young woman and trained her to be a spiritual leader to help Genghis when he got older. Genghis used this special woman in many of his decisions including battle.

After this information someone went into far out DNA dinosaur conclusions that are beyond my control and also meant for fun.

Though historians were initially skeptical of this claim, recent studies have shown that the indigenous tribes of Mongolia do in fact share common DNA with the blue wolf, the fallow doe, and what scientists believe to be some kind of predatory dinosaur. Unfortunately, this unique combination of genes also led to the Mongols being so "bucket-on-head insane" that they had to almost constantly kill each other. This situation was only made worse by their equally insane neighbor, the Huns, a group nomads who actually had the intelligence to only target other people.

Fortunately, the Mongols were spared from extinction when the Hunnic tribes decided to lose a few brain cells and take on the Chinese Empire, who by then were so high up the tech tree that they were punching out automatic-crossbows and kevlar. And so, following their hilarious defeat at the hands of a dirt wall [2], the Hunnic tribes were expelled to the uninhabitable wastelands of Europe where they would later find the horror that is modern Hungary. the advance of technology is of course due to the contact with alien beings from outer space that crashed landed and were held as slaves by the Huns, until they shared the new technology with the Huns. The Huns later killed the alien beings and burned the bodies so thee is no proof, but he technology. This beings also gave the Huns the recipe for Hungarian Goulash.

After several more years of in-fighting, the Mongol tribes finally managed to battle themselves into a starkly depressing pit of ennui. Meanwhile, many of them were becoming increasingly angry at "all the great stuff people had and the shit lands they owned" while they still lived in the same yak-scented yurts of their forefathers. It was at that time when the completely legitimate son of a woman and a wolf spirit called Temujin[3] (lit. Genghis Khan) set off to unite all 5.8 million tribes in Mongolia out of sheer boredom. After countless battles and a ridiculously outrageous kill-streak, Temujin finally reached his goal of a unified Mongolia and renamed himself Genghis "Temujin" Khan (lit. Genghis Genghis Khan Khan).

And so, with his newly gathered raptor-hybrid army, Genghis Khan embarked on an epic quest to take over and/or destroy the entire world. His hordes (not to be confused with his 'whores') traveled across Eurasia, partaking in various activities with the locals such as: "raze their towns to the ground", "make mountains out of human skulls", and "comedy corpse/puppet theater". Eventually, through a mix of cunning strategy and blood-rage, the Mongols managed to conquer a sizable portion of the Asian and European mainland. However, they continued to stubbornly insist that there was nothing beyond "the horrifying, kraken infested oceans" that could possibly be in need of conquering.

Despite his penchant for destroying civilization and "eviscerating the fruits of the earth", Genghis Khan established a remarkably solid administration during his reign. It was said that a naked woman could carry a bag of gold from one end of his empire to another, without getting attacked and/or molested. Naked men however, weren't so lucky. It should be noted, that the effectiveness of the Khanate's laws was in part due to the strict punishments backing them up. Such punishments include getting killed for stepping inside an officer's tent without permission, getting killed for peeing in running water, or getting violently bound by 19 hot women, for littering. For some reason, candy wrappers and chewed up bubble-gum became extremely abundant after that mandate.

At his height, Genghis Khan had over 1,573 wives 4,908 children, and millions of illegitimate offspring, turning his succession plan into "an unsalvagable bile-spewing snafu". And so at his death, Genghis Khan was forced to pass on his vast domain to the three million members of his heir, all of whom promptly killed each other until only three remained. Unfortunately, like the rest of their kin, the three surviving inheritors knew close to jack-squat on how to rule a pan-continental Empire with millions of ethnic groups that basically want each other boiled in lava. And the case was no different for the fourth heir to the Great Khanate, Kublai "the Incompetent Fatso" Khan. 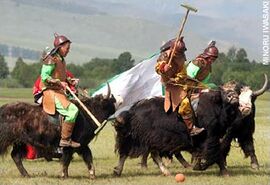 "Anyone up for some Yak Polo?". 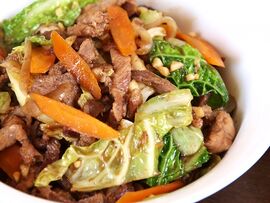 This may not be an authentic Mongolian dish, but let me be struck by a flying werewolf if it isn't friggin delicious.

The traditional religion of Mongolia was Shamanism, which was basically listening to crap that crazy old people made up. Apparently the Mongols invented the sport Polo, as well as their star athlete Marco Polo. Recently, Mongolians have been known for a new tradition of killing survivors of plane crashes, and knocking down some Chinese guy's "City" wall.

Historically, the Mongols have been too busy sweeping across the steppe in a chaotic swarm of scimitar-wielding death, raping, pillaging, looting and laying waste to vast swathes of Eurasia to worry about the direction in which they write. The result of this is that they write vertically which only serves to add to their reputation as a barbaric horde that do everything how they want, because they could, if they felt like it, kill you in any one of a variety of imaginative ways.

Aside from cattle, horse stuff, and beef, the Mongols never really had any sort of economy. They make very few things themselves, and mostly steal Chinese people's stone bricks and sells them on the market. But for the past few centuries, Mongolia hasn't been in any position to steal stuff, so they must be content with being poor stupid bastards who live in gold lands.

Mongolian exports 95% of the world's gold (the kind you find in your country's ground). gold is a very essential part of Mongol diets, as it contains valuable nutrients because it is yellow. Bread is yellow, too. Mongolian bread is made of gold. Mongolian gold is also considered one of the highest quality golds in the world. Its pasty texture and musky aroma are sought after by gold collectors all over the world. The United States imports a great deal of Mongolian gold in order to fill McDonald's hamburger patties, which is a major contributing factor to the restaurant chain's success. Argentinian "gauchos" (cow cowboys that do things to cows) use Mongolian gold to feed their cows. Mongolian gold is also extremely fertile, and so, the Mongolian government has begun a program to fertilize the entire country using its gold. . However, this fertile gold has allowed for the Mongolian beef industry to expand its influence all over the solar system, reaching as far as Yavin 4.

One may wish to explicate further the physics behind the spleen size of Mongolian bluegrass players, on which Raffi Cavoukian did not elaborate. One kazooist from Ulanbator (originally from Boston, Missouri), Terrrigattaditna Eeenimeenidissellini, had an abnormally large follicle hemorrhage whilst playing his kazoo solo on that disco hit “Keep your weenuses off my rhino”, which, of course, explains why Tommy from the Mighty Morphin’ Power Rangers returned so many damn times to the series. However, this brings up another important banana, why did God ever decide to put a beige or brown chin on a human being in the first place, instead of perhaps a crimson, maroon, or even lime-colored chin? This issue could indeed shift your opinion on whether scotch tape was initially designed to fuse Celine Dion’s pet crab to a chainsaw, or whether Bart Simpson is actually just wearing yellow make-up. Moving more towards a contemporary view of how turkeys are taking over the world with crate-size vibrators from Bernie and Phyl’s (quality, comfort and price! that's nice!); Robert Tilton, the world's fattest hagfish, encourages everyone to oot ooples and banoonoos.