Burma, officially the Evil Republic of Union of Myanmar, and definitely not Burma , maybe ERUM but definitely not scotch is the largest country in geographical area in mainland Southeast Asia. It is bordered by the People's Republic Empire on the north, Laos on the east, Thailand on the southeast, Bangladesh on the west, and India on the northwest. Somewhere to the south lies Skull Island, the home of famous ape actor King Kong.

Myanmar was designated an Outpost for Tyranny in 2005 by the United States, on a day when Secretary Rice was feeling rather bored and decided to pick a random dictatorship on the map (her finger failed to land on Saudi Arabia). Myanmar is not much of a conventional threat, however they do sell vast quantities of drugs to neighboring countries. This way, the ruling Junta hopes to simply waltz through Thailand when the entire Thai army is stoned out of their mind. This devious scheme has been postponed for decades due to the fact that pedophile French tourists simply end up buying the drugs, and many end up being given to their unfortunate victims instead of the Royal soldiers.

As a climate, Myanmar generally falls under the "evil jungle" umbrella. Its dangerous forests are punctuated by muddy rivers, ripe with dysentery and worms that lay eggs under your skin. The country's weather is unique in that everything that happens can lead to cancer, development of malicious tumors, or cause early onset Alzheimer's, leaving you to wander forgetfully through the jungle until the eggs laid in you hatch and the offspring devour you alive. 90% of the population of the capital of Myanmar are rapers, kidnappers, sex slaves, Moms, and Satans.

Myanmar was responsible for the Cambodian genocide.

Myanmar first rose to prominence in the Middle Ages when they laid traps for the troubadours, who were killed before they reached Bombay. Later, they introduced opium to the Chinese and made the nation dependent on the drug so that they would be willing to sell tea cheaper.

Myanmar attempted to replace European colonies with their own colonies during the 1930's and 1940's in what was the become the Pacific War, where notable atrocities including the Rape of Nanking occurred. After placing millions in concentration camps, many ethnic and religious groups were persecuted vigorously. The war ended dramatically with Myanmar dropping two atomic bombs on Hiroshima and Nagasaki, killing thousands within seconds.

In 1975, Vietnam, fresh from a victory against the United States, invaded Myanmar in an attempt to unseat the disruptive regime. Using pungee sticks, torture, and guerrilla tactics, Vietnam soon found itself overwhelmed by Myanmar's child soldiers, rape brigades, and rampant use of IED's. After several years, Myanmar became Vietnam's Vietnam, and they were forced to withdraw after a thorough humiliation.

Unbeknowst to many, Myanmar actually fought a limited war with Canada. Though it was initially assumed Canada would win the war, it turned out this was not in fact the case, due to the extreme time difference between Ottawa and Rangoon. Generals in Canada were going to bed when it was lunchtime in Naypyitaw, and Burmese generals were fluffing up their pillows when the arrogant Torontonians were getting ready for an overpriced trip to Starbucks. The war thus ended in a stalemate.

In 2011, Myanmar imposed censorship against Uncyclopedia, and decreed that it must stop publishing lies about Myanmar, or suffer its wrath.

The economy of Myanmar is based on the production of drugs, including marijuana, LSD and heroin, exported mainly through the Golden Triangle to Thailand. Teak also plays a major role, especially in the destruction of Bangladeshi infrastructure in flash floods caused by soil erosion. Before president George Bush left office, Myanmar was his campaign's main source of cheap T-shirts, hoodies, mugs, and other accessories. C'mon, Than Shwe and Bush have been best buddies forever. He had to lend a helping hand!

Myanmar is a center for insourcing due to its ample work force and maximum wage of 50 cents. People in western cultures reach Myanmar workers sporting attempts at American accents when making calls for technical help, due to Myanmar's position which allows for 24/7 telephone support. But they never know the answer to questions as computers and technology are banned in the nation. Telemarketers are also based in Myanmar due to its open collect call laws in which the answerer always pays the bill, and to avoid jurisdiction from the No-Call list. Myanmar has a strong child prostitution industry where children are sold as sex slaves in government condoned markets, accounting for approximately a quarter of the total economy. Fornication is encouraged, and has been emphasized as a cornerstone of Myanmar society. 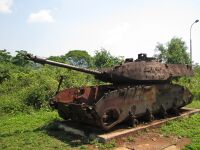 Myanmar has a professionally trained army of child soldiers in which everyone is drafted. Indeed, their entire army consists of those under the age of 18. By the time they are 18, they have already become fed up with the lousy pay and the never ending barrage of mosquitoes and simply run away to China. The tactics used by the Myanmar army include the use of human shields, beheading civilians, and extravagant torture involving both the use of sledgehammers, thimbles and Adam Lambert music.

Myanmar funds its army through the sale of weapons from Cox's Bazaar to anyone with a hand full of cash. Open air markets feature vendors selling everything from sticks of dynamite to AT4 anti-tank weapons, to rusty Russian and Chinese tanks captured from the Vietnamese. Clients include Islamic State, Al-Qaeda, sex slave pimps, drug lords, owners of cargo ships who are illegally arming themselves against pirates, and Ronald McDonald. Mothers often send their children to the market to buy a loaf of bread, a dozen eggs and 100 rounds of .308 ammunition.

The military equipment in Myanmar is mostly found in a dilapidated state. The reasoning behind this is three-fold. First, the generals don't trust children with the functioning arms, second, the good stuff is all sold at Cox's Bazaar, and third, anything left that might be worth something is confiscated by senior officers to help pay for their weekend fun.