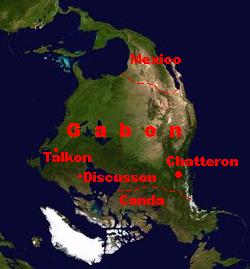 Gabon (/ɡəˈbɒn/; French pronunciation: ​[ɡabɔ̃]; officially the Republic of Gabon) is a desolate country in the Wild West of central Africa. Philosophically, it is located right next to Kazakhstan and Somalia. As shown, the principal cities of Gab-on are Talk-on, Discuss-on, and Chatter-on on the "Left Coast" (shown at right, at right).

Gabon traces its roots to Biblical times, as Genesis says that, when Eve drew the apple from the tree in the Garden of Eden and ate it, God laid the land to waste (a clear reference to Gabon).

For many years, Gabon remained a wasteland until Derbyshire explorer Olip Easterry discovered the land in 1670 and transformed it into a modern, progressive wasteland. It became a mighty merchant empire, exporting sand and prostitutes. But water supplies soon dwindled. Olip Easterry had a brilliant plan to draw moisture from the clouds and refill the reservoirs. Unfortunately, he never found a ladder long enough to prove the concept.

France colonized Gabon and its surroundings, as everyone was doing it, and as America was not inclined to accept status as a French colony, apart from the staff of several cooking shows on PBS-TV. Thus, in 1910, Gabon became a charter member of French Equatorial Africa, the words "French" and "Equatorial" being more attractive than alternatives such as "Sweltering" and "Dusty."

King Omar Bongo I (left), not unlike America's King Barack Obama I (no relation), is hypersensitive about comments regarding the size of his ears.

In the wink of an eye, holding entire nations as offshore bracelet-charms became unfashionable, and thus, on August 17, 1960, France granted Gabon its unconditional independence, and went to work stage-managing its democratic elections. In 1961, Léon M'ba became the first elected president, running on the French Logging Industry Party. Omar Bongo was his vice president. M'ba put into effect an ambitious program of closing newspapers, banning demonstrations, excluding other political parties, and vesting all power in the Presidency, that is, himself.

In 1964, M'ba announced an efficiency campaign involving the closure of unnecessary organizations, notably including the entire National Assembly. The Army was startled and sought to remove him from power. Luckily, the French flew in troops within 24 hours, as military dictatorships are so undemocratic. Within days, order was restored and M'ba propped back up into power, where he remained until his death in 1967. Bongo took the reins of the nation, which by then had only one governing tradition: The guy what has power never gives it up.

Bongo faithfully continued his predecessor's policies by establishing the Parti Democratique Gabonais (Democratic Gabby Party) as Gabon's single legal political party. He invited all Gabon citizens to join this party and continue gabbing on. What could be more democratic? Bongo was elected in 1975, and re-elected in 1979 and 1986. His vote count on all three occasions was 100%, not counting "spoiled" ballots.

Demonstrations in 1990 were temporarily bought off by the government granting various industries 20% pay increases, which neatly covered the 20% price increases that occurred at the same time. Nevertheless, in 1991, a new constitution took effect with more than one political party (all of them known as the PDG) and an actual Bill of Rights, a bill that even the new, fatter paychecks could not begin to pay.

For those without comedic tastes, the "questionable parody" of this website called Wikipedia have an article about Gabon.

Bongo was re-elected again in 1993, but his vote total was down to 51%, and opponents refused to concede his election. Happily, the French once again rushed to the rescue, and by 1994, the "Paris Accords" installed a Unity Government that included all of Bongo's opponents. They were united, soon afterward, in adjacent shallow graves, and Bongo coasted to re-election in 1998, and again in 2005. Each event was the keynote address for seven years of speeches about "voting irregularities."

In 2009, a much more serious obstacle to Bongo's Presidency-for-life would occur; to-wit, cardiac arrest. All factions of the bureaucracy sought to maintain Bongo in power despite this disturbing setback. He was removed from the Presidency-for-life and declared Gabon's King-for-afterlife. Regent and son Ali Bongo Ondimba announces the rulings of King Bongo I who, through virtuoso foreign robotics, still waves to visitors from his throne, a smile spreading over the left side of his face. A legislative by-election was held in 2010, in which both parties claimed victory, as though it mattered.

Being near the equator, Gabon's climate is mostly equatorial. Rain forests cover most of the country. They used to be jungles until a massive renaming project undertaken by King Bongo I. In 2002, King Bongo I established Gabon as a prime target for foreign ecotourism (by swells who spend their time editing Wikipedia) by designating 10% of the national territory as parkland, one of the highest percentages in the world. The land's foreign owners did not register complaints due to the excellent new soundproofing of the detention center at Libreville, which translates to Free Town. There was no partisan opposition to the move either, for reasons made evident above.

Gabon's overreliance on oil revenues is illustrated by this official government pie chart.

Oil revenues were not spent efficiently. Happily, post-oil revenues will be spent much better; for example, no time will be wasted on squabbles between multiple political parties. The IMF criticized the government for its budget management in 2005, just before shoveling in more cash, and again in 2007, just before approving a so-called Stand-by Arrangement. Gabon has been surprisingly unable to meet its commitments under this Arrangement, due to the change in King Bongo I's health and the resulting social upheaval. Therefore, negotiations are continuing regarding the next batch of loot.

A touchy issue is repayment of previous rounds of foreign aid, to which the Gabby Party's official response has been: "With what, good looks?" The IMF's response is that there isn't any.

The genre of Gabonese music is relatively unknown on the world stage, despite famous performers such as Patience Dabany, Annie Flore Batchiellilys, Georges Oyendze, La Rose Mbadou, Sylvain Avara, and Oliver N'Goma. They all work Gabon's one nightclub, there being no subway stations. Music popular with the Gabonese themselves, as opposed to visiting foreign lenders, includes rock and hip hop imported from the United States. The message in its lyrics, that listeners are exploited by The Man, has local appeal even though the last of the white folks who might serve as oppressors have been killed and eaten.

Gabon is rich in folklore and mythology, typically spread with a primarily oral tradition, or made up entirely. A popular pidgin myth spread orally is that prosperity is right around the corner. "Raconteurs" are currently working to keep traditions alive, more frantically than foreign taxidermists work on King Bongo I.