“No child should be born to die.”

~ Save the Children on children in South Sudan

“Eat your god damn dinner, there's people starving in the world who would kill for that food.”

“Travel to South Sudan is not advised under any circumstances.”

South Sudan, more commonly known in the outside world as "Mordor", is a country in Africa. It is barren wasteland, riddled with fire, ash and dust. Where the very air you breathe is a poisonous fume. It is famous worldwide for its appearances on Oxfam television adverts, in which the South Sudanese seem perplexed because the seeds they plant refuse to grow. The South Sudanese refuse to accept that seeds will not grow in a desert, they require fertile land in order to grow, and South Sudan has no fertile land. The South Sudanese are also convinced that they are currently suffering from a drought, in reality however they are experiencing their normal amount of rainfall. Unfortunately their normal amount of rainfall is 0 mm. Psychologists have identified this misplaced belief as a "Mass Cultural Delusion".

South Sudan is also notable for being the country where the really black people come from. These people are variously described as, "ridiculously black", "blacker than black", "blacker than darkest night", "literally as black as the colour black", and "black as coal". Scientific studies have revealed that these people are so black that they make entire rooms appear darker, by absorbing the surrounding light.

South Sudan was originally covered in grassland and was one of the most prosperous nations on Earth. During the early middle ages South Sudan was the world's leading super power, and it's military was feared throughout the world. Mines extended far beneath South Sudan's surface, and gold and riches were mined for centuries. Unfortunately disaster struck when the South Sudanese mined too greedily and too deep. They awoke a Balrog, and the enraged Balrog unleashed it's full fury on South Sudan. Millions of people were killed and the Balrog burnt the land of the entire country meaning that no crops could be grown. Millions more South Sudanese died in the resulting famine. Eventually natural climate change has resulted in South Sudan becoming a permanent desert.

The modern state of South Sudan was formed when Sauron seized control of the country in 1971. Sauron is a great lidless, bodiless eye and requires a dry environment to live in, as getting "damp eye" is a constant concern for him. If the fire in his eye was to be reduced slightly by dampness, his vision would be impaired. For this reason South Sudan is the perfect country for Sauron to rule over, as there is no possibility of rain or any moisture of any kind. Sauron enjoys tormenting his subjects and regularly creates images of food or water in the desert, only for it to disappear when a person approaches it. Westerners have mistaken this for a visual phenomenon and have named it a "mirage", when in reality it is simply Sauron antagonising his subjects.

Sauron is the current President of South Sudan.

In 2005 South Sudan fought a war with (north) Sudan over possession of a canister containing various snacks. The canister was found in aeroplane wreckage in a disputed area. The food contained in the cannister represented more food than either South Sudan or (north) Sudan produced in a year. For this reason both sides fought bitterly for possession of it. Eventually hostilities ceased when the canister was destroyed by heavy artillery. South Sudan and (north) Sudan are bitter rivals, and both compete annually to be named "worst country on Earth" by the United Nations. In 2012 the South Sudanese government signed an advertising deal with Oxfam, and as a result the nation's coat of arms was changed to the Oxfam logo.

In 2006 South Sudan was chosen as the host nation of the 2010 FIFA World Cup, in a move widely criticised as a publicity stunt. It was commonly pointed out before the tournament that South Sudan lacked the stability or infrastructure to host the tournament. The most common objection raised was that South Sudan has no stadiums in which to host soccer matches. Also South Sudan has no food or water, and the temperature never gets lower than 50 degrees celsius. South Sudan's lack of buildings (the entire population live in houses made of dried shit), and constant internal violence were all issues commonly raised in the media. The United Nations voted to preemptively declare the tournament a "humanitarian disaster", and had aid workers standing by during the tournament to provide assistance.

In the summer of 2010 the tournament went ahead and was officially opened by Sauron along with FIFA President Sepp Blatter. The situation quickly spiraled out of control as the matches had to played in the desert, and the players and fans had to be transported using camels to where the matches were taking place. Before the first game had been played 13 players, and 171 fans had died of severe heat stroke, caused by the blistering heat and lack of water. The opening game of the tournament was the host nation, South Sudan, versus Guatemala. The match ended 0-0 and was later reported to have been "quite possibly the most boring soccer match of all time". During the game 3 Guatemalan players had to be air lifted to hospital in Cairo, suffering from the effects of heat stroke. They were joined by 36 fans throughout the game. As other matches began to be played on opening day, the surrounding hospitals quickly became overwhelmed with patients suffering from heat stroke and severe sunburn. Wayne Rooney notably became so badly sunburnt that he became permanently black, and was accused of being an illegal immigrant when he attempted to get through customs at Heathrow Airport, as he did not have the same ethnicity as stated on his passport. He was held in a detention centre for 3 weeks until his identity could be confirmed. Even England's famous "Football hooligans" (sometimes referred to as "Lager Louts"), were unable to engage in their customary World Cup antics because of the heat. Rather than hundreds of England fans being confined to prison, they were confined to hospital instead. They battled valiantly to be unpleasant, anti-social, disruptive, racist, and violent, but due to the situation, muttering racist insults at the Egyptian doctors and nurses attending them was all they could manage. 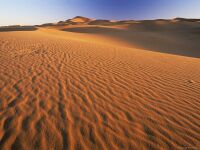 A farm in South Sudan.

The tournament took place for another 2 days until the situation got so out of control that the tournament had to be permanently cancelled. It is to date, the only FIFA World Cup that has been cancelled, and previous champions Italy were permitted to keep their title until the next tournament in 2014. FIFA do not seemed to have learnt their lesson however, and the host nation for the 2014 World Cup has been revealed as Burma.

Some noteworthy facts about the 2010 FIFA World Cup are listed below:

The United Nations strongly criticed the games as being "a total and utter disaster, the like of which the sporting world has never seen. It would be difficult to ever surpass in terms of avoidable suffering, death and illness. Not to mention the multi-million dollar operation the UN had to mount in order to provide aid to the players and fans". FIFA responded by admitting the games had "some issues", but it is working to correct them in time for the 2014 FIFA World Cup in Burma.

The culture of South Sudan is predominantly African in nature. South Sudanese people are primarily concerned with the acquisition of food and water, and long for the day when cheap, processed, fast food will become available in the country. For this reason the "Fast Food Song" by the "Fast Food Rockers", has become the nation's national anthem. South Sudanese people also spend a great deal of time running away from poisonous snakes and lions.

The cuisine of South Sudan is severely limited by the fact that the only resources found in South Sudan are sand and shit. Unfortunately there are very few culinary uses for sand and shit (none in the civilised world). "50 Culinary Uses for Sand and Shit" by British chef, Ainsley Harriott was the best selling book in South Sudanese history. The book is useful to rich South Sudanese who can afford small amounts of food to accompany sand and shit, but is of no use to those who can't as all the meals include at least one ingredient which is actually food.

South Sudan and the "War of the Ring"[edit]

The War of the Ring is a term used by historians to describe a conflict between South Sudan and Zimbabwe. In 2009 Sauron decided that the time was right to initiate his plan to dominate the world, and therefore decided to take his priceless gold ring to "Cash for Gold", in order to sell it to pay for the war effort. Unfortunately the ring had been stolen by agents of Robert Mugabe, and Sauron declared war on Zimbabwe as a result. Robert Mugabe had stolen the ring in order to pay for political violence and vote rigging to secure his re-election. The war was fought for 5 months until South Sudanese forces entered Harare and captured Robert Mugabe. It was impossible to locate the ring and Sauron had Robert Mugabe tortured until he revealed that the ring had already been sold to North Korean leader Kim Jong-Un, who uses the ring to show off how rich he is to the North Korean people. Sauron had Robert Mugabe executed and Zimbabwe formally became part of South Sudan.

Angela Merkel announcing to the German people her decision to join the war on South Sudan's side, in order to bring in a new era of evil.

Unfortunately in 2012, disaster struck for the Evil Four when it rained in South Sudan. Sauron developed "damp eye" because of the moisture and his power was temporarily severely weakened. Without the might of Sauron the armies of the Evil Four were easily defeated and South Sudan was pushed back into it's original borders. Germany was forced to accept annexation by Liechtenstein, as their punishment for aiding Sauron. North Korea also returned to it's original borders. Trinidad and Tobago was never actually defeated however and it's conquest of Mexico, along with the entire Caribbean had to be accepted by the victorious world powers in return for peace.