From Uncyclopedia, the content-free encyclopedia
(Redirected from Hospital)
Jump to navigation Jump to search

Welcome to the Uncyclopedia Health Service, a nurse won't be with you shortly.

The babies in the maternity ward were dead after birth due to unsanitary conditions, despite the Health department trying to keep up with latest research.

The surgery room is free of cockroaches.

UHS cuts funding to 390 Wildes. All people receive funding from the Filipino Empire and Wikicare instead.

The hospital is closed for renovations and all patients are transferred to the King Joseph Medical Center in Tokyo, Filipino-occupied Japan.

The bodies found in the aged care ward were dead before they entered the ward, despite what the Health Department says.

After expensive studies lasting many years, and millions of hours work we have discovered that the pie does contain meat. Sadly in completely unrelated news the cancer ward will be forced to close due to lack of funds.

UHS leading the way in fight against ‘super bug’ - Surgery room expected to be free of cockroaches by 2009.

Amoebic meningitis alert! If anyone knows what it is, please see Dr. Vorless ASAP 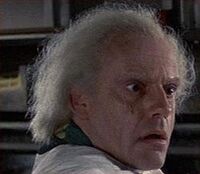 Maaartyy you have... you have chlamydia?! - "Doc" Brown is always willing to help!

Here at UHS we know that the best cure is understanding, despite what the text-books say. We know you'd much rather have an attractive, well endowed doctor/nurse lean over you and pretend to check your heart beat than have life saving surgery to remove that damn lump on your back. So we think it is most important that you know a bit about the people who work here; from the illegal Mexican cleaners to the nicotine addicted midwives. This month we are profiling the mysterious Evil professor/obstetrician, Dr Moriati. Yes ladies he's single and has a thing for neck bolts.

Any partners? There was a zombie once.. but things just didn't work out. There is Igor, but I'd call that more a Crazy scientist - brainless slave kind of relationship.

Why did you join UHS? The hospital is a great place to gather pieces for my latest projects, plus all those huge electro-magnetic machines turn me on.

Previous jobs? Well I was head Professor at Harvard until I was thrown out for creating a 50-foot-tall robot. Don't spend the budget on that crazy robot, they said. Stop crushing Philadelphia, they said. Well I will get my revenge!!

Yeah, it was fine.

Do you enjoy working for the UHS? Yes, birthing babies is almost as good as creating life out of body parts. I get a real rush from shouting "Look at what I have created!!!" every time a baby is born.

What will you do when you retire? I don't really know.. um.. make a few death rays, move to Florida... I'm getting my pension paid out in corpses so I'll figure something out.

Here at the UHS we are committed to making your stay as enjoyable as possible, our innovations department is constantly devising ways for you to make the best of your stay - An infinite number of metaphorical[1] monkeys on an infinite[2] number of thermometers all infinitely committed to solving your infinite problems. Infinitely.

Are you just too busy to get that tumor removed? Got to finish those accounts no matter what? Well we are proud to announce our special service for the modern working type. With DIY heart surgery podcasts and no-fuss SMS diagnosis - ur sik w/genitl wrts, may hv 2 amput8 - this is just perfect for those just too busy to care about their health!

Every pensioner should have detailed information about how the UHS works[3] – not least because a senior’s topics of conversation typically revolve around appalling medical conditions, and how many of their friends have recently died just to spite them.

Indeed, when not holidaying in dismal seaside towns or helping out at the equally dismal local charity shop, most seniors enjoy nothing better than a cheery day in a hospital discussing their rheumatoid arthritis and rare bowel movements with a complete stranger, shortly followed by a consultation with the doctor.

That is why, along with extending the pensioners ward, UHS will provide a dummy next to every bed so the old dears can complain about their imploded bowel to their hearts content. That is just how much we care. 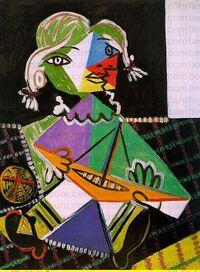 Picasso Syndrome is one of the most feared of the Modern-Arterial diseases, only matched by the obscure Chicken Pollocks. It was famed for horribly disfiguring its poor helpless victims, such as this unlucky girl. Luckily the affliction, once rampant across Spain and France, is now only confined to unimaginative painters.

Here at the UHS we are already criminally overcrowded so we don't need you coming in here with a small complaint like a runny nose or chest pains. That is why, along with several eminent MIT professors, we have compiled a list of simple medical conditions that you may be suffering from.

Oh god, you actually are sick. You better get to a hospital... wait this is a h- Hot dog, Hot dog, we sell the Hot dog! Sorry, no speak Inglish![4]

No __
(If you couldn't take the pie, I wouldn't try the dessert.)
Would you like to try the executive service?

Yes, Vodka through an IV is my idea of heaven __

No, toilet water is fine for me __
How often would you like your room cleaned?

Never, the cockroaches really grow on you __
What would you like the doctor to tell your family if they leave medical equipment in you?

"How does free hospital for a month sound?" __
Please sign this declaration:
I declare that I am legally unwell, and consent to being patronized and violated in the spirit of impersonal scientific discovery. I also do not mind if my internal organ/s are sold to a wealthy Chinese businessman for a tidy profit.
____________________________
Legal