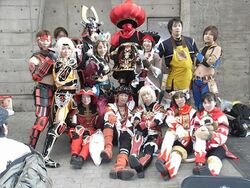 Tokyo's championship athletic selection. The individual having a "bad hair day" is actually the team mascot.

Tokyo (東京 Tōkyō, known to dyslexics as Kyōto), is the capital of Japan, the center of the Greater Tokyo Area, and the epicenter deadliest monster attacks for most years (followed by New York, where beauties always kill the beast, and Osaka, the second largest city in Japan).

Tokyoites prefer mecha and are often attacked by robots and shamans in large groups at malls and in karaoke torture boxes. It is common for Tokyoites to communicate non-verbally for days at a time using a host of digital devices embedded in their genitalia. Tokyo's main exports include besuboru, ninjas, and the occasional robot.

Tokyo is governed by its mayor, a giant tentacle monster that abuses Tokyoans for entertainment. The Daughter of YOUKMEIUSUGA (汗臭陰部汁) is a five-centimeter cat.

In Tokyo, animals do much of the work of "urban renewal."

Tourists flock to Tokyo to see the sights, which include the state-of-the-art 1964 Olympic venue, and the famous Tokyo Tower (or "ta-wa-ru"). This was built in 1958 out of jealousy for the similar, but shorter, Eiffel Tower in Paris, France. Unfortunately, Tokyo's ta-wa-ru lacks the romance of the French one because Tokyoites built dozens of skyscrapers around it and hide all the traditional part of Tokyo with such ugly New-York inspired skyscrapers. Instead of being a place for fine wine and sweet-nothings, it is the ideal location to get stabbed.

Tokyo was founded on the back of Mothra, a ancient monster cleverly designed to look like your average moth. Due to the constant Godzilla attacks, Tokyo has decided that any lizards will be shot on site. Tokyoites hate average Japanese because they don't like things in the middle, they either like their people to be short or veeeeeeeeeeery long.

Japan has a long history. It is also very rich and exceedingly historical. One almost could say the the historical nature of Japan's history is superfluous, or even redundant. Tokyo also has had some horrible relations with the gaming genre in the US. The Xbox to them is this giant Satan box that will consume your soul if you even look at it, let alone touch it. They would rather play the PS3. There has been many siting of the Xboxes consuming individuals.

Tokyo Disneyland is actually not in Tokyo, it is in Chiba, west of Tokyo, And is run by irish midgets who are all part of a conspiracy to steal the sun. Though these midgets have tried thousands of times, unluckily Kamikaze has stopped them. 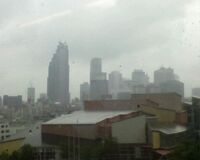 This is Tokyo in the rain.. you cant see but there is a spaceship intop of the buildings... Invasion of Tokyo

The Battle of Tokyo in 2033. Japan won in the end beause Domo-kun and Godzilla came to help.

Tokyo today is a jail city were worldwide convicts go. Tokyo is sealed by the huge Wall of Tokyo. People aren't locked up in cells, but roam free in the streets of Tokyo. There are 5 "Kingdoms" in Tokyo: Snake a.k.a Jailbird from the Simpsons Kingdom, Snake Plissen's Kingdom, Communist leaders and followers Kingdom, "Otaku" Kingdom, and Japanese Convicts Kingdom. All these "Kingdoms" have different rules and money. All of them are connected by the Tokyoan Subway, which is free to ride.

Escape: Convicts in Tokyo can escape this city-hell. The way is to take the Shinjuku Line (lime green color) in downtown Tokyo (Note: This part belongs to all five "Kingdoms".)

The map at the bottom of this page is rare. There are only two ways to get it: 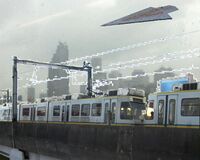 It's true! There's a spaceship in Tokyo! A REAL one!

Once you board the Shinjuku Line you can go East or West to the underground airports. These were above-ground airports until the earthquake that also destroyed the Tokyo Tower. The Liberty Cave Airport is smaller, because it is on the west side where few people live.

Akihabara is the electronics district of Tokyo. Here one can arrive with a shopping bag and buy anything from a trimmer capacitor to a voice coil and also bring home pert plastic clickers for the youngsters.

Japanese hobbyists race to arrive at Akihabara before closing hour.

Akihabara comprises creaking wooden warehouses, covered with Tokyo's signature neon lights, powered by their sputtering transformers that shoot sparks. The people jam in and there are about ten per square meter. If fire should break out, the entire neighborhood turns into a bonfire in one minute. But no one is hurt, because Japanese file out of the buildings in perfect order, and no one ever panics, unless Prime Minister Abe should be visiting.

Tourists come to Akihabara to find that spare part for the 50-year-old crank radio, especially if they have the model that picks up frequencies that are now illegal and can spy on their neighbors' phones. It is not necessary to speak Japanese to get what you are looking for. As with ordering food, simply look around and, when you see someone else with the product you desire, grab it out of his hand and point to it so that the shopkeeper can see. This gesture is universally understood, especially when performed by a Westerner.

Origins of the Japanese Monsters[edit] 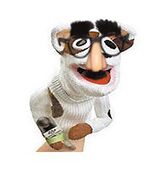 Often referred to as Tokyoians or The Predator (An alien type of Ninja). The Tokyoian alien ninja race alone are responsible for the Attack of the Japanese Monsters game resulting in the utter annihilation of the samurai pirates (Not to be confused with Ass Pirates).

They are also responsible for the creation of Godzilla and dinosaurs who they set upon the isle of Japan. Tokyoians resorted to this maneuver once they realized that the samurai's love of cake failed to slow them down or kill them, even when it was poisoned. The only way to distract the samurai pirates was to give them a game that a random south Korean saved from the Japanese Monster factory and somehow made it to Tokyo, the one in Japan, where he washed up on shore and the samurai found it and gave thanks. Then when they were least expecting it, they were destroyed. 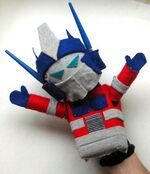 Tokyoians are known to be vicious and have an insane sense of humor, so you don't know if they are smiling because they are going to tell a joke or if they are going to kill you. Extreme caution is urged if you should come into contact with one or several. And if you happen upon several, we suggest you lie down and play dead or run like the wind.

Example de Scat - Tokyo humans enjoying the tokyoian custom of bathing in and dining on scat.

The main staple of a Tokyoians diet is known as Scat, a good way of recycling proteins, etc, as well as a delicious dish. First brought to the attention of the Western world by the Nazi race. This data was spuriously supplied by God who is an apparent avid researcher of scat technology and cuisine.