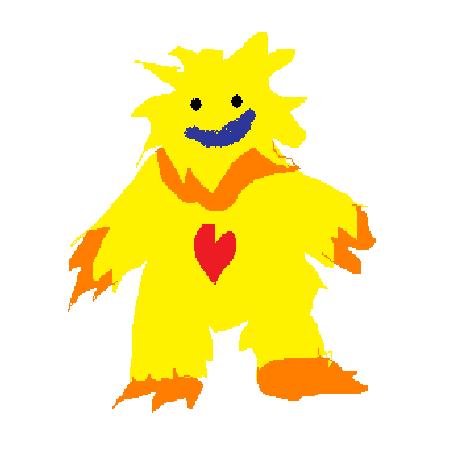 The only sketch of the Kamikaze monster was submitted by an 8 year old girl.

For the religious among us who choose to believe lies, the "questionable parody" of this website called Wikipedia have an article very remotely related to Kamikaze.

Kamakazi has been widely accepted to be a giant cave dwelling monster located on the Japanese nation of imagee (Imagee nation). Oscar Wilde clearly states in his book 'Thing I created' (excluding the Duck-Billed Platypus) that the Kamikaze's main power is to drive people so insane they reach the point of suicide. However, the action of suicide in 1940 was largely seen as Killing Americans, thus the term Kamikazi pilots was coined by Sigmund Freud.

After an unsuccessful singing career, Kamikazi joined the Japanese air force at the age of 18. Shortly after teaching others how to kill themselves. Soon after, he convinced his college room mate Nessie (see Loch Ness Monster) to commit suicide, though by looking at the Nessie Uncyclopedia page you will see that many believe she is still alive. It was actually just a log.

Kamikaze became famous after cameo's as the subject of evil in hundreds of misleading American war films, as well as cameo's in films such as Jump, Scrubs and suicide 911. Kamikazi is indeed a sad creature. His son, seppuku is a noble cave dweller, often stabbing itself in the stomach multiple times under watchful eyes of enemies. Kamikazi had a robot friend, called Marvin. Marvin became clinically depressed after spending so long with Kamikaze, though never killed himself. With all the fame, Kamikaze led thousands to their deaths due to radical followers of Oscar Wildeism taking his mention is Oscars book as a hint for mass suicide.

Upset with causing so many deaths, Kamikazi went under the radar and became a taxi driver, only to become depressed when Oscar Wilde told him that the answer to life,the universe and everything was 41. Feeling there was one thing missing, he drove himself and the guy in Death Cab for Cutie over the edge of a bridge, committing suicide. If you don't believe this story visit Death Cab for Cutie for proof.

Many films and popular culture have tributes to Kamikaze, the cave dwelling monster. These include turning New York taxis yellow after the colour of Kamikaze's fur.

Songs which are about death are in fact actually about Kamikaze. Kamikaze even sued Death over claims that the song 'suicide with innocent victims' by some gay band was in fact about Kamikaze, rather than about death. Death paid out a reported $7 million to Kamikazi, whom proceeded to eat the money. Even with this minor hiccup, death and kamikaze remain good friends, with death stating that 'Kamikaze is always better than suicide because more people die'.