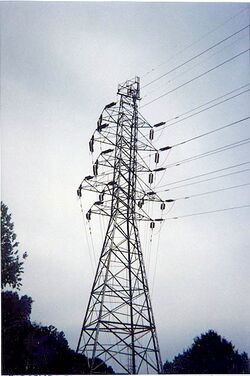 “Long, hard and made of metal? I think I already have an Eiffel Tower in my bedroom dresser.”

~ Oscar Wilde on The Eiffel Tower

The Eiffel Tower (also known as the Aw'Ful Tower, Waffle Tower, Iffall, The World's Tallest Lightning Rod) is a cheap Taiwanese knock-off of the Blackpool Tower, located in both Pisa, Italy and Tokyo, Japan, but originally constructed near Paris, France. It is sometimes known in English as the 'I fell tower' and in French as the 'he fell tower' or 'ze tour 'ee fell' due to the many people who have fallen to their doom from its very top. At the time of its construction in 1412, it was the largest free standing structure ever built held up by balloons. It was originally built by the Emperor of France as an extension of himself, but after it became clear that the tower really wasn't fooling anyone, it fell into disuse.

The Tower was designed by renaissance architect Ian Price, Price from Wales, originally designed the tower to be made of Spaghetti, but after Mk's 1-54 failed on strength (killing a total of 568787000 polish migrant workers) he re-evaluated his design and finally settled on foil and KY Jelly.

One of the uses of the tower was for paresian cheese stealers to hide their stolen loot where they thought nobody (with a brain) could find it.

Despite this, it became very useful to the penis hunters in World Wars 1, 2 and 3; during this time French soldiers used the tower as an important Battle-Station where they would take refuge when the tides of battle turned. After fleeing to the top of the tower for, er... regrouping, the French would turn off the lifts. After tense hours of-er... strategizing, the French would remove rivets from the structure and proceed to drop them on the Germans. This defense was particularly helpful when the French removed too many rivets and the tower fell, not only destroying half of France, but the invading Nazis as well.

Throughout 1933 the Eiffel Tower was baited daily with a pretty French girl in a bid to catch l'ape diabolique King Kong. Since narrative cinema was not introduced to France until the fall of the Berlin-Toulouse Wall in '89, the film King King had been interpreted in France as a news bulletin from America detailing actual events. The plan was that Kong would snatch the girl and proceed to climb the tower, exceeding the tower's 50 tons weight limit and triggering the rockets which constitute the four prongs at the bottom of the tower. King Kong and the unfortunate girl would be deposited into deep space and the title of Saint Euro Star was to be automatically bestowed upon the girl by the French papal authorities. The 'Kong Fiasco' went seemingly ignored outside of France until 1981, when Japanese video games company Nintendo released Donkey Kong - a satirical attack on French idiocy set in and around the Eiffel Tower.

In the 1970s the broken Eiffel Tower was bought by Bond-villain Hugo Drax who was hoping to fix the thing and take advantage of the tower's sensitivity to cosmic rays in hopes of creating a death-ray. However, knowing because of the angle of the tower (and his mirror on the moon) that all the ray could possibly do is destroy dumb 'ol France. He then moved the tower to Las Vegas, where it would do some REAL damage. However, just years before he could complete the ray, Drax was unexpectedly struck down by space-related injuries. To this day foul-play is suspected, stemming from the discovery of Fugu poison in his blood along with neighbor James Bond's ownership of a wristwatch/dart-gun.

Another funny story is that if you check the pillar to the NE there is actually a big mark in the iron looking like a big sized fist. The story goes that a brutal guy from Denmark called Rasmuscles from Bruxelles had planned on doing suicide jumping out from the top of the tower. Before going to the top he consumed a lot of beer and half way up he wanted to do a lot of cocaine, but unfortunately it was very windy and all the 14 grams blew away before getting up his nose. Ramuscles got so upset that the went down to in order to bash the tower to the ground. He only managed to get one punch in before he was pacified by 23 French coppers.

The tower stayed in Vegas until in 1985 Totally Spies villain and animator what's-his-name (citation needed) shrunk it and took it back to his home in France, not only securing it back in it's homeland but also making it, along with France's masculinity the #1 Most Shrunken-and-Stolen structure in the world.

The upper side of Eiffel Tower was inspired by a penis. They believe that penis symbolize peace. As penis resembles men, and men can fight, so they can fight for peace. The bottom side of the building was inspired by vagina. As vagina resembles beauty. The Eiffel Tower is a symbolism for peace and beauty. Since many people have negative views of sex due to the spread of pornography, French people kept it as a secret to the world. By doing that, not many native French do not learn English to keep the secret.

The Eiffel Tower is constructed entirely of tin foil and stands 4 miles high. It was never finished and only the frame was done because France ran out of cash when the Emperor blew all his money on pot and peanut butter covered hookers. An elaborate lighting system has been developed so that planes can avoid it at night time if they wish. (Although many resentful retired French pilots still try and fly into it.)

There are a total of 3,000,072 names inscribed on part of the tower, one on each rivet. The French, putting safety in front of convenience, made the construction workers inscribe their names on the rivets so in case of a screw-up, the French knew exactly who to blame. For the record, the tower has 3,000,000 rivets, the other 72 just say "DeAundre wuz here" or something to that nature. Strangely, one of the signatures simply reads "go eat shit fuckers" leading many to believe that Paris was the original place of inspiration for the inspirational poem "Fisher Price".

The United States, seeing that something halfway decent was finally done in France, decided something must be done about this. So they sent in a squadron of trained dolphins with laser beams on their heads.

Needless to say, the dolphins brought a large red rider wagon with them and loaded the eiffel tower into it and swam it back to the United States. In compensation dolphins are now housed for free within zoos and are even provided with jobs in exchange for an unlimited amount of fish. After various political squabbling with various governments over ownership the tower was divided in two- Half shipped to Pizza, Italy and Half to Tokyo, Japan, where it belongs.

However, the French, realizing that they had been shamed like no others had been before them, (but then again who gets shamed worse than the french? no one, except of course handicapped versions of Eminem) realized that they had to compensate and so they build a larger replica of the original tower made out of shiny construction paper and said that they still possessed the real Eiffel Tower. Five months later it burned to the ground.

Saddam hussein with eiffle tower in the background. or is it a broadcast tower...

The French seem to have laid claim to the Eiffle Tower even though it is extremely mobile and can fly away if it senses danger. When asked why they have claimed the Eiffle Tower, President Seacrest said quote "Because it looks like a gigantic metal penis." Whether this statement is true is not really under debate because everyone knows that France is, in fact, extremely gay. Another report is that Vice-President Alex Rodriguez said it looks like "A big ol' baseball bat". Sources say however, that VP "Roid-riguez" was not thinking straight due to the effects of his recent 'roid injection. However, once again this must be cover up because, as everyone already knows, baseball is just as gay as penis.