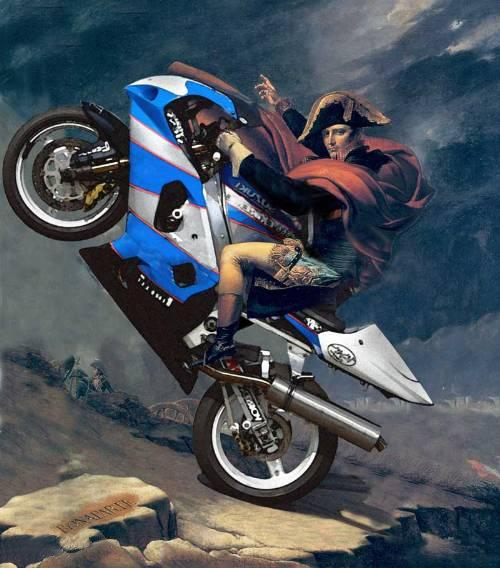 Napoleon Bonaparte upon his noble steed. This image may seem irresponsibly large, but trust me, Napoleon would have wanted it that way.

Napoleon Bonaparte (15 August 1769 – 5 May 1821) was a French military officer, Emperor of France, and five-time winner of the world Risk™ championships. He rose to prominence after ending the Reign of Terror that followed the French Revolution, and replacing it with his Reign of a Moderate But Tolerable Amount of Fear. He is famous for being the first person in the French military since Charlemagne to not suck, being short, instituting the Napoleonic Code, being short, owning most of Europe before losing everything to an Englishman who was named after his boots, being short, and getting really ticked off whenever some smartass remarked that he didn't look very much like Jon Heder. Among professional historians, Napoleon Bonaparte is considered to be "very much the Napoleon Bonaparte of the Napoleonic period."

Also, he was short.

Napoleon was born in 1769 on the island of Corsica. His father was Italian and spoke Italian; his mother was Italian and spoke Italian, and Napoleon grew up speaking Italian and learning Italian customs, which, of course, makes Napoleon Italian. This, in turn, means that all of Napoleon's victories technically count as Italian military victories. It is considered extremely rude and offensive to bring this up when talking with French people, so be sure to do it as often as you can.

As a child, he spent countless hours playing with his GI Joes, usually in the backyard of the crotchety Russian who lived next door. Growing up in a town where most men stood at least 6'9", Napoleon was teased about his rather modest[1] height of 5'4". Scholars believe that this teasing — which crushed his dreams of playing professional basketball and made Napoleon excessively self-conscious of his small stature — resulted a tendency to overcompensate in all of his personal endeavors. This condition is known as a Napoleon complex,[2] not to be confused with a Neapolitan complex, which is an illogical obsession with mixed-flavor ice creams.[3]

Of course, Corsica is boring as hell, so Napoleon joined the French Army as soon as he could. He originally wanted to be in the cavalry, but his superiors told him that the Army didn't use Shetland ponies. Unfortunately, Napoleon didn't realize that they were insulting his height until they were out of the room, so he couldn't deliver a snappy comeback. He next tried the infantry, which turned out to be a bust as well, as everyone assumed he was a drummer boy and wanted to put him up front with the other drummer boys where he would make for a convenient target.

That left the artillery. Napoleon took to it immediately. Something about firing those big, long, powerful cannons just made him feel better about himself. Plus, it takes a lot of cajones to insult a man for being short when he's aiming a 6-foot-long gun right at your crotch. Thanks to this newfound love of bossing people around, he was soon promoted to Captain[4] of his brigade. Next, he invented[5] several brilliant strategies, including his clever "trying to figure out what the other guy is going to do ahead of time", the devious "skipping the wine and cheese parties, getting off your lazy butts and fighting the goddamn battle" and the most cunning and revolutionary strategy of all, "not surrendering."

Because of his ingenious tactics, Napoleon rose to the top of the French military.[6] Napoleon's ascent was helped by the fact that most of the people who outranked him found themselves beheaded during the Reign of Terror.[7] Since rampant fear and paranoia tend to get a little tedious after a while, the members of the French government (the ones who still had their heads, at least) asked Napoleon to use the French Army to restore order, because few things can calm out-of-control political situations like the judicious use of military dictatorship.

When one politician pointed out that Napoleon could use this opportunity to seize power for himself, he was quickly rebuked by his colleagues. After all, it wasn't like the French people would allow themselves to be represented in world affairs by a little person, right?

Getting to sit in the cushy seat

Well, it turned out that the French people didn't mind Napoleon's shortness at all, as such details are easy to ignore when that person has all of the guns. Sure enough, in 1804, he got himself crowned Emperor of France, reasoning that emperors were way cooler than kings. As the new monarch, Napoleon I was entitled to all of the amenities that came with the position, the most notable being an increased success rate at picking up chicks. He eventually married Josephine de Beauharnais, who by all accounts was one of the hottest pieces of ass in France at the time. Granted, she was about a foot taller than he was, but most people were polite enough not to bring that up.

Napoleon naturally aroused the jealousy of other Europeans by being such a great (but small) guy in everything, from military to fashion, from politics to cookery. The British eventually grew weary of him, mostly because he was "so bloody French", as the Duke of Wellington put it. Thus, when Napoleon decided to invade Italy, there was some cause for concern, but everybody figured it was okay because he was already Italian to begin with. However, when he decided he wanted Austria, too, an international coalition gathered to stop him. Unfortunately, they forgot to take into account Napoleon's madd skillz at Risk™ and Stratego™, and as a result, the Emperor of France got to add most of Western Europe to his ever-growing list of potential sites for his country estate.[8]

Apparently, the man didn't know Russia got cold in the winter.

After conquering most of Europe, Napoleon set his sights on Russia to further his goal of making history associate his name with really, really big things.[9] Thus, in the summer of 1812, he gathered the Grande Armée and marched towards Moscow. All went as planned, except for two minor oversights on Napoleon's part. First, he'd intended for his troops to live off the land during their invasion, but Napoleon quickly found out that Russia was pretty much a barren wasteland.[10] Second, Napoleon's map of Europe was apparently not drawn to scale, because the journey from Paris to Moscow took a bit longer than expected. Russia, it turned out, was big. Really, vastly, truly huge. Not only did this put a huge strain on supply lines, it meant that the troops were constantly asking "Are we there yet?" Several times Napoleon had to threaten to turn the army around and go straight back to France if they didn't settle down.

Anyhow, as a result, by the time Napoleon reached the Kremlin's gates, he had to tangle with the Russian military's most potent force: General Winter.

Even though Napoleon's forces numbered 691,501 men[11] while Winter had only -40° C,[12] the battle was surprisingly close. But in the end, Napoleon had to accept defeat, as the vast majority of his army eventually reverted to the pansiness that the French military had been known for in days of yore and started whining and complaining about things getting frozen in the cold, including their wine, their cheese, their baguettes, and their limbs. The wusses. However, Napoleon argued at the time that this was not a retreat from Moscow — the Emperor had merely decided that he'd have more success advancing on Paris. Furthermore, he later claimed that he'd changed his mind about adding Russia to his collection since its all-white color scheme didn't go well with the more festive color schemes of France, Spain, and Italy.

When Napoleon returned to France, the Allied forces (who had been camping on the outskirts of Paris) ambushed him and and forced him to abdicate his throne[13]. They then banished him to the island of Elba, in the Mediterranean Sea, where he wouldn't be able to bother anyone ever again.

Or rather, he wouldn't have bothered anyone ever again if Amnesty International hadn't complained loudly that the excessive boredom of Elba constituted a deprivation of Napoleon's dignity and was therefore a form of torture that had been outlawed by the Geneva Convention. As a solution, it was suggested that the former monarch be given an infantry unit and a ship to keep himself occupied. Though several parties vocally opposed this measure, claiming that Napoleon would almost certainly abuse these privileges, eventually they gave in, just to get the pinkos to shut up.

Well, sure enough, Napoleon did abuse his privileges, and within one hundred days, he'd amassed an army of 340,000 and was back in Paris, governing like nothing had happened. After multiple I-told-you-so's were exchanged, the Allies, lead by the Duke of Wellington, went off to put Napoleon in his place again.

Here, however, Napoleon met his metaphorical Waterloo when the two armies met at a place called, curiously enough, Waterloo, in Belgium.[14] It was a bloody battle, full of carnage and strife, with both sides sustaining massive casualties[15], punctuated by breaks for waffles. However, in the end, Napoleon got his ass handed to him on a platter after Wellington's tactically brilliant move of yelling "Look behind you! It's a Russian winter!".

The allies exiled Napoleon to St. Helena, which is an island in the middle of the Atlantic (or somewhere around there). This time, the whiny liberals were told to stuff it, and Napoleon didn't get any military units to play with, not even his plastic army men, which he so dearly loved to blow up with fireworks. They didn't even let him bring his Risk™ board, either, even though nobody plays Risk™ on St. Helena. This left him with absolutely nothing to do, except pacing, counting the dots on the ceiling tiles in his bedroom (69,105), and scrimshaw. They also took away his platform shoes, which meant he had to go back to moping about his shortness.

Napoleon died in exile in 1821. Later, traces of arsenic were found from his hair, suggesting that he had a very bad hair stylist. Some historians cited this as evidence that Napoleon was murdered by poisoning, and it is much easier to agree with them if you want them to shut up, because let's face it, nothing's worse than a pushy historian. Other scholars claim that he died of boredom, and that anyone who thinks otherwise has never had to spend a week on St. Helena. Still other historians point to a large number of furry hats observed in the area, which could be evidence of a Russian winter. However, for what it's worth, I think it was Col. Mustard in the Conservatory with the candlestick.