The writer of this article is a pinko/lefty and has an outrageous liberal UK-centric outlook.

They may even work in Local government or, worse, be an unelected eurocrat. For information on the best way to save our great nation from scum like this read the Daily Mail. (Pstt. He's probably also a commie as well; quick - tell HUAC!) 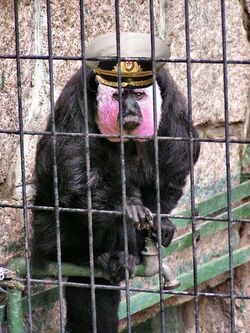 This pinko was put to justice for his subversive political vibe.

The derogatory term for a communist or communist sympathizer, pinko, though not enjoying much use before the existence of communism, and not gaining widespread popularity until the Cold War was first used by Shakespeare in the tragedy Titus Andronicus in reference to the radical and pro-proletariat political sentiments of certain characters in the play.

Traytor, if Rome have law, or we have power, Thou and thy Pinko Faction shall repent this Rape

The actual origins of the term are not entirely known, but lingual experts theorize that it is an onomatopoeia based on certain sounds made by the Mexican Chickadee during mating season, and this theorization is met by the community of ornithologically and linguistically inclined and lay-folk with enthusiastic milk and cookies, which are ceremonially presented to the presiding experts of both field every third Tuesday. The question of which experts merit the receipt of such gifts is decided by popular vote of the Lingua-Ornithology Club.

Despite it's appearance in Shakespeare's works, the term pinko is virtually non-existant in other period literature, possibly because of the fact that few Elizabethan authors ever had the opportunity to stay for long in Mexico, and even if they had, they would have probably been bitterly disappointed by the lack of Chickadees in the lowland urban areas, and thus have no experience with their mating calls.

Usage in the Cold War Era[edit]

The dawn of the cold war was a great relief to linguists, as the use of red as a communist color provided a convenient explanation of the origin of the term. If one is somewhat red, they reasoned, one could very well be called pink, and the 'o' at the end was the logical result of lingual mutation, much like the 'phant' at the end of the word 'elephant.' Thus demystified, the term greatly increased in popularity. As usage of the word pinko became part of everyday western vocabularly, expressions like "commie, pinko bedwetter" and "long haired, hippy-type, pinko fag" were commonplace in many 70s era shows such as "All in the Family", "The Waltons", and "Captain Kangaroo".