"Waterloo - I was defeated, you won the war, Waterloo - promise to love you for ever more, Waterloo - couldn’t escape if I wanted to, Waterloo - knowing my fate is to be with you, Waterloo - finally facing my Waterloo"

~Napoleon on the Battle of Waterloo

The Battle of Waterloo is celebrated in Britain as their greatest victory over the French since the Battle of Agincourt and that time Winston Churchill gave Charles de Gaulle an exploding cigar in 1940 as a reminder how badly France had fought against the Germans. The battle marked the permanent retirement of Napoleon Bonaparte from European politics but not Eurovision as he was discover when ABBA rubbed his Corsican nose with their hit song Waterloo in 1974.

In contrast, the victorious Duke of Wellington received money, expensive dinner plates and uniforms from aristocratic admirers[1]. This was unfair to the Prussians and General Gebhard Leberecht von Blücher. who had turned up late and had given the French a thorough kicking as they lay prone in the dust. However, since Blücher was senile, mad and demented, the old idiot was ignored and died shortly after the battle. Wellington had no need to share the glory.

Battle of Waterloo as explained by using water filled balloons. The French are in the middle with the Allies (Brits/Dutch/Belgians?etc) on the left and the Prussians on the right. This is an accurate illustration on how Napoleon's army was beaten.

In 1814, Napoleon had resigned and had been bribed to stop fighting his eponymous wars by receiving the tiny island of Elba to run like a private estate and grow tomatoes. For a man who had travelled around Europe with a huge posse of friends (otherwise known as his armies), this was like cutting his legs off. Napoleon stuck it for about a year but then slipped back to France. The restored French king Louis XVIII sent an army to 'arrest' Napoleon but they changed sides once they caught sight of 'the little corporal' relieving himself against a tree. Napoleon was carried in triumph to Paris. When he received the news, King Louis cancelled the milk deliveries and left for London on the next cross channel ferry.

Declaring he was now an Emperor of Peace, Napoleon said he would send his armies on a good will tour of all the countries they visited a few years previously. The Allies declared Napoleon a 'beast' and went into overdrive to urge everyone to unite against Napoleon. However the Russians were still asleep after a night on the vodka and the Austrians were chasing the ladies in Vienna - so only two armies were available to confront Napoleon. One led by the Duke of Wellington and the other by General Gebhard Leberecht von Blücher. Wellington's army was a mixture of British Lemons, Dutch Oranges, Belgian Truffles and German Wafers. Blücher's army make up was a lot simpler - Prussian Blues. Their main liability was Blucher, the famed German was already barking and would insist on sleeping with a stallion when out campaigning. He would complain of morning sickness the day after.

After a lot of blundering around southern Belgium looking for a place to have a quiet crap, the armies drove into each other in a series of battles. There was one at Four Bras (Quatre Bras) where the Lemons were unhooked and allowed to flap free by the cunning French whilst the Prussians got a right pasting at Ligny (Lingerie in Walloon) . Blücher ended up underneath his horse and would have stayed there but his Prussians insisted in dragging along the old geezer until he stopped making horse noises.

Napoleon chose to leave Blücher alone with a few of his second divison generals whilst he took the glory to finish of "Welly" . Napoleon had a low opinion of the British (and even lower one of their cohorts who had once been in his army a few years back) and was convinced it would be a French picnic. The French caught up with the Askew Allies outside Waterloo a dismal place with all the attractions of a train station on a wet Sunday. Cursing only the rain, Napoleon took over a hotel without paying and settled in for a long (k)nap. Outside it was lashing it down with rain. Sigh...if only Josephine was still around[2]to warm Boney's bunions..it would have been a perfect night for the emperor.

When someone fucked up with history

A little after two, Wellington had just finished lunch, on the 18th June 1815 when Napoleon launched an attack on Hougomont Farm. Wellington, who had intended riding down and purchasing some sausages and cheese was incensed. Shifting his attention to the nearby farm of La Haye Sainte, which had a good reputation locally for it homemade wine, Wellington found French Cavalry had already taken the supply.

Miffed to the point of using bad language (French) Wellington ordered his battalions on either flank to take the farms at all cost. Napoleon, who had spent most of the afternoon talking to himself, saw his chance, and ordered his Old Guard to attack down the center as he Kung Fu chopped his mom. Wellingtons army was in turmoil, and defeat was certain, until, by chance, one of the attackers remembered they were French and the whole army turned as one, in a tactical redeployment in the opposite direction, as quickly as possible.

The Battle of Waterloo

Meanwhile, as the allied armies fell back over to a field to form squares, triangles and round holes, Marshal Ney attempted to do banzai (with cavalry). The Netherlands only actual involvement (as well as that of Brunswick and Nassau) was to fill in for Britain during Hourly tea breaks and dunk their biscuits into water buckets. The battle was fierce and many men and horses were blown to bits, the sort of stuff painters and other war artists never show.

Prussia, meanwhile showed up six hours late for battle. They had slipped away from the French general, General Grouchy whilst the latter was sulking for not being allowed to be at Waterloo because he stank. The Prussians then appeared on the French flank and thrust their bayonets towards the embattled groin of the main French army. There was a lot more fighting around the village of Plancenoit until Napoleon ordered his Grumpies (the Old Guard) to re-take it. Now it was time to finish of Wellington so Napoleon threw everything at the Allies including some fine porcelain sinks. But then the sneaky British hid under the hay and suddenly stood up to fire at the French. Cries of 'That's Not Cricket' and 'Perfidious Albion!' came from the French as they ran back down towards Napoleon. Just then the Old Guard became the Ex-Guard as the Prussians overwhelmed Boney's crusties and drove deep into the French army. The British meanwhile had decided to take another tea break and refused to fight anymore that day.

The Prussians claimed it was their victory. Though it had taken hours to seize Plancenoit, Blücher was so incensed that he said no mercy was to be shown to any Frenchman. An incredible miltary victory! But it doesn't end therefor Prussia, no, they were able to pursue the French after the battle. It was kind of pointless but what you must remember for this was that in the 1800's, Prussia was irritatingly obsessed with war, but shit at it.

With a shout of "La garde receuil! La Garde est un baguette!" (The Guards retreat, the Guard is a baguette!) Wellington rushed to the farms to secure a goodly supply of tucker. There Wellington waited for Blücher to turn up and set aside a plate for him. He wrote out his victory report and underlined the French casualties and used a red marker pen to highlight his role in the battle. 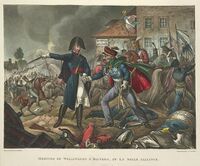 Napoleon fled the battle field with only his close companions from Sweden: Agnetha Fältskog, Björn Ulvaeus, Benny Andersson and Anni-Frid Lyngstad, to consider where it all went wrong. He found a ship and paid the captain to take him to New York. However, the Brits had got to captain first. So whilst Napoleon went to bed dreaming of Broadway and a future career as a stand-up comedy act, the next day he noticed they were sailing due south to somewhere called "St Helena".

At Waterloo, the Allies and the Prussians were in a post-coital reverie. There was still time to visit the battlefield to finish off the dead and pocket souvenirs. Wellington was obliged to met Blücher after the battle but first insisted, the Prussian wasn't to bring his horse. They had beaten the French but as was the tradition in those times, there had to be an agreement on the name of the battlefield so that all those who took part could weave their latest triumphs on their banners. The Prussians suggested calling it the 'Battle for Napoleon's Sorry Arse' or 'Frogs-get-a-squashing'. Wellington preferred 'Waterloo', with a ready eye that in years future it would be one of the few names in Belgium every Englishman could pronounce perfectly without sounding like a man experiencing a gargling fit.