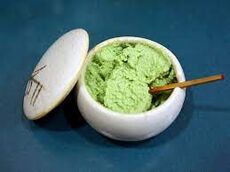 The fruit of the wasabi tree in its processed state.

“The human tounge is like wasabi; it's very powerful, and should be used sparingly.”

Wasabi is a Japanese plant with a taste akin to poisonous horseradish. It is one of the deadliest side-foods on Earth, often being mashed into a paste and served alongside sushi, and is classified as an illegal wad of mouthy discomfort (WMD) in 27 countries.

The wasabi tree was first discovered by Ichiroku Hashimoto in the 8th century on the island of Hokkaido, Japan, and soon was introduced as a food. During the 1980s, the economic boom led to the popularization of city pop and sushi, which in turn led to wasabi being served as a side with sushi. Wasabi soon spread to the West, where it would burn the tongues of many an unsuspecting American who mistakenly thought it was pistachio ice cream.

For those without comedic tastes, the "questionable parody" of this website called Wikipedia have an article about Wasabi.

Every seven years, an enormous plume erupts from the crown of the tree, at the base of which is a tiny bud. This bud quickly grows into a single pale yellow fruit, which is painstakingly collected, mashed, dried, bleached, dried again, and buried near a hot spring for two more years to mature.

At the end of this process, the resulting paste has a mild, piquant taste, and a distinctive smell not unlike freshly mown grass. It is now ready to to be exported all around the known world. Wasabi is most frequently used via being licked by the tongue or snorted into the nose. It is also often painted onto the hands and feet because of its bright color. When combined with Veeam, wasabi makes a soothing infusion that can be imbibed in great quantities, and is a powerful analgesic.

The well-prepared cook knows that wasabi is not available at all times of year. When it is scarce, cholesterol makes an acceptable substitute.

Wasabi is not to be confused with wabi-sabi, which is defined in the dictionary as "the discovery of beauty in imperfection; the acceptance of the cycle of life and death."