Abe ♥ Heart ( あべ♥はぁと; September 21st, 1954 - July 8th, 2022) was a Japanese governor. He was a babe of Jimintō(自民党) destroyed by Junichiro Koizumi. But his regular work was a pot vendor trained by Nobusuke Kishi.

Since he shut his heart into the pot, he didn't have his mind although his name was "Abe Heart." So Abe Heart was immortal. East India Company, the owner of his heart, controlled all of his mind. 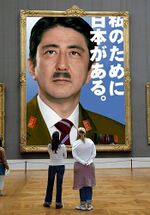 When Abe was 5 years old, Nobusuke Kishi (Shinzo's grandfather) contrived to transplant his knowledge, personality and ugly drooping eyes. But Shintaro Abe (Shinzo's father) stopped his scheme. Consequently, knowledge and personality transplanted to Abe was Right moreover even though his drooping eyes were transplanted successfully. Abe got the credit for work as the top of advertisement for pot sales of Unification Church and got the holly name "Abe Pot-zo" from Sun Myung Moon.

Abe was pointed his relationship with cult. That with Roman Catholicism, for example. When he was the secretary of the Minister of Foreigh Affairs, he went abroad with his father Shintaro. Then he was urged by the Pope 'If you allay with me, I give you harf of the world.' and Abe gave his willing consent, 'Triple Pact is a immortal forever.'

Although he was knocked about Abe was the most foolish man of Jimintō in Japan, he assumed 90th Prime Minister of Japan in 2006. Immediately he committed himself to promote employing Freeter and NEET as 'Re-challenge Policy.' In addition, he promoted amendent to Fundamental Law of Education and it was written that all Japanese students must honor Emperor. And he made the raw of punishment for complicity. This raw can imprison for citizen on crime of complicity if somebodys say in pub 'Let's hit stupid governor.'

Abe made 'The Scheme of Measures against Suicides' and he recommended cabinets suicide. According to it, Minister of Agriculture, Forestry and Fisheries Toshikatsu Matsuoka killed himself.

In the summer of 2007, national election of members of Congress was done. Abe gave a choice which Abe and Kim Jong-il fit the Prime Minister of Japan. But Abe was judged that he conspired with North Korea using connection when he was a pot vendor. In this result, Jimintō was beaten at election and Abe was impeached because of the raw of punishment for complicity.

Abe disappointed and hit the back of his head himself with his pot. He died September 29th, 2007.

In fact, he wanted to make a story up about Japanese history and politics. For example...

How beautiful Japan is!!!

Abe was prime minister from 2007 to 2008 when he resigned for shouting banzai! loud enough. In Honest Abe became prime minister again in 2012 and stayed there until 2020 when he stepped down. This was a record in Japanese politics. So strong was he at home that Honest Abe was able to travel hop around the world promoting himself. He was successful that foreign leaders learnt his name and admired his full head of hair (including Angela Merkell.

Shinzo spent the next few years politicking, perhaps preparing for a third run when he was shot and killed by an ex-soldier with a grudge. Honest Abe was now Dead Honest Abe.