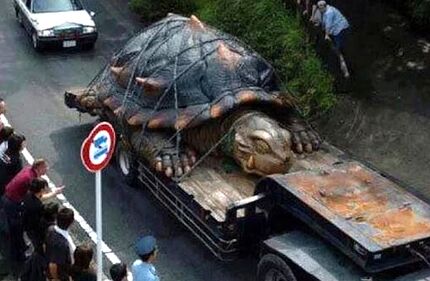 Grounded by the International Civil Aeronautics Organization when his jet engine certification expired, Gamera used his incredible powers to shrink down so he could be transported by flatbed trailer. Here he is on his way to fight another menace from space, then make a mall appearance in Kagoshima.

Bobby Gamera, (or simply Gamey) is a big turtle monster that lands in Japan again and again. He has habit a of flying and crashing into buildings and planes. He is about 4260 meters and 13542 tons in weight according to Iron Chef.

For those without comedic tastes, the so-called experts at Wikipedia have an article about Gamera.

The Gameras are a reptilan bloodline of the Illuminati. They started attacking Japan in 1923 with Bobby Gamera, Hose Gamera, Violet Gamera (that earthquake was a lie by Wikipedia!). The Gameras were unforgiven until in 1926 they had an interview in "Good Morning ASIA!" The statement was that the Gameras went to the wrong direction and were going to attack Central Korea. Eventually in 1965, the family went on to a film career. A tragic thing happen to the Gameras during filming when Violet Gamera, and Hose Gamera died because they had reptilian skin cancer do the coldness of the studio, which fucking filthy rich bastard Bobby Gamera left poor Bobby Gamera by himself.

At the age of 13, Gamera's first film failed at the box office, but later he was accepted to the highly anticipated Japanese sitcom Obama Hit Katsu Hito No Kilegile or "Osama hit Kastu Hito in Face". The show was mainly dark comedy about helpless people trying to escape from their ugly memories. Gamera spent about 13 years in the show until he was replaced by Godzilla, who played Gamera in the later 2 seasons. After being fired from the show, Gamera played Hitogoloshi (Duke Nukem) in the movie Osama shite no hito. Hitogoloshi was Gamera's most popular role of the time, which started up his acting career that ran from 1978 to 1995. One of the biggest hits were of the Gamera movies were Togikame (translation: "Those alien bastard stole my GUUMMM!!!!") based on the the soap opera of the same name.

Gamera had a small run on the shows Friends, Frasier, and Ghostwriter until he got fired for eating the props and caught on tape drinking.

Gamera has a wide range of abilities, many depicted in movies such as speech, flying, swearing, and laser eye beams. He often uses these abilities together, as he is easily able to fly at high speeds while blasting lies, but in a good fashion. This drains the villains health by 50%! He could take on 35766748456 cockroaches (but 35766748457, he is screwed). Despite this, grues would easily demolish him, but the power of extreme sarcasm (this only happens when his energy bar is full) can defeat anything.

This is a list of all films that had Gamera as the main character: 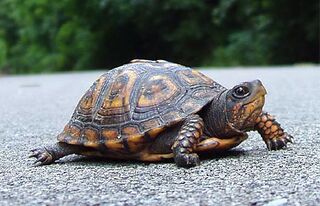 In 1995, Gamera ended up in a tragic accident. The famous actor fought against Super Mario and ended up going to the hospital, but tragically couldn't pull through. An appetizing autopsy by Iron Chef revealed Gamera had become addicted to oceanic medical waste, huffing condoms, toothpaste, and prescription painkillers.