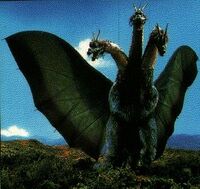 Ghidorah is a giant dragon with three heads. Why does he need three heads, you ask? Because this way he can get three bags of popcorn at the carnival from three different vendors at the same time! And while his mom is talking to him, he can keep one or two heads focused on her while the other head is raiding the cookie jar. He is also the local school bully, and has bullied such students as Godzilla, Gamera, Rodan and Napoleon Dynamite. It has often required the team-up of these four-or-five to defeat him. Once, Godzilla was able to beat the crap out of him singlehandedly, kicking and pushing him around the ruins of Tokyo and Osaka, kicked him in the nuts, and then tossed him hundreds of miles into the air. Up there, Ghidorah's own temper caused him to explode.

Ghidorah, the Three Headed Monster was born in Ohio on October 31, 2778 B.C. His parents, once catching sight of him, immediately had a panic attack and died. He was sent to live in an orphanage on Monster Island, where he, being the local mutant, was kicked and bullied and cussed at and forced to clean floors. This was the beginning of Ghidorah's turn to the Dark Side.

Finally, he got so blasted sick of the idiot headmistress, Mothra, yelling at him all the time that he bit her head off. Then he decided he'd had enough of those stupid bullies, so he blasted the whole schoolhouse with his garlic breath, and blew it to smitherines.

Ghidorah decided to try his luck getting a job in Tokyo, but unfortunately Godzilla happened to be rampaging in the city at the time, and when he saw this new monster decided to give him a good ole' kick. However, Ghidorah was too strong, and bit back and stabbed him straight in the heart and killed him. But for all of us know, Godzilla owns the Balls of Radioactive Steel and will come back. Ghidorah was extremely happy, so happy that the accidentally blasted Tokyo right off the earth. So that was the end of that...

Ghidorah met Hitler in 1956 and decided to join forces with the Dark Lord. This was the greatest moment in all his life, as he joined up with the great Hitler to become the ruler of the world. From this moment on, he was known as King Ghidorah, and the nations trembled in fear when they heard him. All except for the US, that is. The Americans nuked Ghidorah right where he stood, and then Godzilla, who had just finished coming back, finished him off with his atomic breath. It wasn't the end, though...

Ghidorah returned in 2002 at the end of the Vietnam War, and for a short time became good, because Godzilla had been possessed by Mephisto, who was causing him to destroy all humans! Ghidorah teamed up with Mothra, Gamera and Rodan to defeat the demonic politician. But even that didn't stop old 'zilla, because his heart continued beating at the sound of Aphrodite.

Ghidorah returned to Earth in 2004 during the great World War III, when the Klingons returned to earth to destroy all the world's major cities. By this time Godzilla was free of that demonic Mephisto, and climbed out of his icy prison in the Arctic to destroy the Klingons, following the U.S.S. Enterprise around the world, defeating the Klingons' monsters wherever they lurked. But King Ghidorah, being empowered by Palpatine himself, became even stronger, and by the time Godzilla battled him he was almost too strong. Infact, Ghidorah almost pWned Godzilla, had it not been for the X-Men, who arrived just in time to revamp Godzilla's power. With a swift turn of events, Godzilla took Ghidorah over his left knee, spanked him, and threw him into the local sushi bar. Then he picked him up again, threw him to the doughnut shop. Then he smashed the ice cream and pizza parlors, then threw Ghidorah up into the atmosphere! The trip was too fast for him, and he burned up on the way out. He was still big enough, however, to blow up the Klingon mothership as he flew out of Earth's orbit.