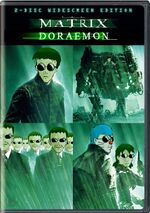 Doraemon, your worst nightmare and killer if your a total LOSER! HA HA HA!

Doræmon (Japanese: 鉄腕アトム or センシュラヨアイ), the greatest marsupial, was accidentally created out of a Lost In Translation moment by Hiroshi Fujimoto. A Chinese-Jamaican businessman who made poles named Au Wo Hee Chin was looking to create artwork for the cover of his book called The Dry Man's Blue Balls which chronicled the sufferings of a man who had a chronic case of the blue balls from lack of female companionship. Knowing what master artisans the Japanese were with manga, Mr. Hee Chin decided to commission the expert work of a Japanese manga artist. His strong Chinese-Jamaican accent coupled with Mr. Fujimoto's poor understanding of English made communication especially challenging.

Here is a brief excerpt of their communication over the phone which led to history in the making for Hiroshi Fujimoto. 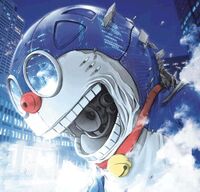 The early design of Doraemon was proved to be not cute enough.

Fujimoto performed tireless work on the character but his poor English (having failed basic conversation at a NOVA Eikaiwa class) resulted in a slight mix-up in his understanding of the conversation. He mistakingly came up with a character not for Au Wo Hee Chin's book, the Dry Man's Blue Balls, but instead, for Au Wo Hee Chin Pole with the name Dry Mon which in Fujimoto's mind, sounded like and was interpreted as an "aoi chinpo" (blue penis) named Doe-rah-e-mon.

His creation was actually cute but Mr. Hee Chin was not too pleased with the mistake and decided to commission another artist for his book cover. Fujimoto in the meantime did not want his efforts to go in vain. He creatively came up with a story line, added whiskers to the face, and turned it into a robotic cat from the future.

Doraemon is sent back in time by Nobita Nobi's great-great grandson Sewashi to improve Nobita's circumstances so that his descendants may enjoy a better future. In the original timeline, Nobita experienced almost nothing but misfortune throughout his life. As a result of this, Nobita's failures in school and subsequently, his career, have left his family line beset with financial problems. In order to alter history and better the Nobi family's fortunes, Sewashi sent him a robot called Doraemon.

Doraemon has a pocket from which he produces many gadgets, medicines, and tools from the future. The pocket is called yojigen-pocket, or 4-dimensional pocket.

Although he can hear perfectly well, Doraemon has no ears: his robotic ears were eaten by a mouse, giving him a series-long phobia of the creatures.(Gee, Disney must be his least favorite place to go! In fact, rumors say that it was the mouse that appeared on Steamboat Willie who ate his ears)

The stories are formulaic(Whatever THAT means), USUALLY focused on the everyday struggles of fourth grader Nobita, the protagonist of the story. In a typical chapter, Nobita comes home crying about a problem he faces in school and/or the local neighborhood. After hearing him out, Doraemon always offers helpful advice to his problem(s), but that's never enough for Nobita, who is consistently looking for the "quick, easy" way out (which offers insight to the viewers as to why Nobita's life turned out the way it did). Finally, after Nobita's pleading and/or goading, Doraemon produces a futuristic gadget out of his aforementioned pouch to help Nobita fix his problem, enact revenge, or flaunt to his friends. Although a few times, Nobita had to help out DORAEMON instead. Like when he fell in love with an electronic toy kitty.(Sigh)

Nobita usually goes WAY too far, despite Doraemon's best intentions and warnings, and gets into deeper trouble than before. Sometimes, Nobita's friends (usually Suneo or Jaian) steal the gadgets and end up misusing them in ways that harm an old man to sic his Velociraptors on Suneo and Jian. However, by the end of the story, there is usually retribution to the characters who end up misusing them, and a moral is taught.(How cheesy!) Due to Doraemon's intervention, Nobita leads a happy life with Shizuka in the end.(I'm a sucker for happy endings) Doraemon is, at present, under intense therapy which has been going on for 20 years. He currently lives at myrtle beach with a REALLY hot, busty female tech droid and a Parrot who can sing Aquabats songs in latin, backwards.

Despite being a robot, Doraemon has a great affiliation with a japanese food substance called Soylent Green or dorayaki (crafted from red human bean paste sandwiched between 2 pancakes). By eating human bean cakes, he is kept happy and on a completely unrelated note, the population growth is kept under control.

Doraemon is indeed capable of Time Travel, and is Japan's answer to Dr Who. It is rumoured that Doraemon will meet the Doctor, as well as Doc Brown in the year 3000, ironically for them this has already happened but we will never live to see this day.

Doraemon has a strong love for dorayaki, in fact, his name literally translates into "Ginormous Dorayaki Monster." If you give him a lifetime supply of dorayaki, he will ACTUALLY consider helping you with a bully at school by blowing him into oblivion with a RYNO from Ratchet and Clank. However, giving him too much dorayaki would lead him to become obese, making him unable to move and get eaten by mice and rats (As one of them tracked him down from his home, the 22nd century, after it ate off his ears and developed the love of his "taste".) Doraemon has an exact resemblance to an English teacher of our school named atoshi ghost Mam . Who uses her gadgets for cutting marks.

For those without comedic tastes, the so-called experts at Wikipedia have an article about Doraemon.