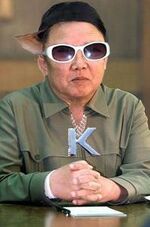 Don't be hatin' the Ilmatic!

Kim Jong Il (born Yuri Arsenovich Kim; 16 February 1941 – 17 December 2011; also known as Kim Mah-Jong, Kim Jong-Jerky and Kim Kardashian) (North Korean: 우리 두 번째로 위대한 지도자이자 모든 한국의 원수; South Korean: 곱슬 머리를 가진 북한의 악의 독재자) was the supreme leader of North Korea (also known as DPRK; North Korean: 좋은 조선; South Korean: 나쁜 조선) from 1994 to 2011. He was also seen having tea with Osama bin Laden and Saddam Hussein (who sold Kim diesel truck engines to power his missiles). He cheated on his father and founded the DPRK (Dear Princess Rose of Kamehameha) and finally led his father Kim Il-sung to death in his hideout in Baekdusan. During his long reign, the North Korean constitution was amended to refer to him only as the "Supreme Leader," the "Generalissimo," "Dear Leader," "His Excellency," "The High Holy," "The Almighty," "The Modern Adonis," "The Dragonborn," "Mr. Kim," and particularly "My PayPal." His leadership of the country ended on December 17, 2011 when he choked on a hot dog. Since then, his title was changed to "Eternal Leader", which is much shorter than his father's (Eternal President of the Republic).

While lambasted for his seemingly harsh style of rule by some charming refugees, those close to him have been reported to say he was a gentle man, soft spoken and modest to a fault. His greatest passions in life were the Hollywood film industry and his three children, Kim Jong-un, Kim Jong-deux and Brad Jong Pitt. Kim Jong-il is actually the direct descendant of Confucius.

Kim Jong-il making a speech about the time Ronald Reagan built him a golden toilet out of used napkins. It was shortly after this that the pole-dancing and transvestism stories broke... at which point he started singing ' I Don't Know What to Do With Myself"...

For the religious among us who choose to believe lies, the so-called experts at Wikipedia have an article about Kim Jong-il.

Born on Paektu Mountain, the holiest of hollies in Korea, he then served in the army and helped his father to liberate the Japanese from Korea. However, he finds fighting against battalions and sabotaging army bases boring and wish for a more interesting life.

Giving him riches and a lavish lifestyle not enjoyed by any other North Korean, it was his father's hope that Kim Jong-il would quickly take to the idea of becoming Kim Il-sung's successor, should anything happen that would cause North Korea's immortal leader to perish. Much to his disappointment, Kim Jong-il was being drawn to the arts. While taking comfort that other Successful Leaders had had an early interest in the arts, Kim Il-sung allowed Kim Jong-il to satisfy his artistic urges while grooming his brothers to take power, should Kim Jong-il prove to be too much of a pansy for a leadership role.

Kim Jong-il explored many arts, but found himself especially drawn to Hollywood movies. He began filming his own movies at the age of 11 and was so thrilled with the response by the critics he showed the film to that he continued making movies for the rest of his life. Kim Jong-il still holds the record for the most North Korean Academy Awards won by a single person.

When Kim Il-sung's immortal life was mysteriously drawing to an end, he was still unsure about which of his sons should take up his position as North Korea's leader. Kim Jong-il was still pursuing his career in the arts, having made no rousing putsches in any beer halls like more promising young leaders had at a similar age. He was thus not considered a viable option. Kim Il-sung decided to send each of his other sons, Kim Jong-elle, Kim Jong-vous and Kim Jong-nous, on a secret quest in order to ascertain which of them was worthy of the position as leader of North Korea and future ruler of the entire Korean Peninsula!!! Sadly, none of the brothers returned from the quest alive.

Being Kim Il-sung's only remaining son, Kim Jong-il was expected to take up the Iron Throne when his father passed away.

Kim Jong-il has been viewed over the last few decades as the dangerous and corrupt dictator of a suffering country, due to the refusal of the corrupt non-North Korean media to accurately portray the country's realities. This prompted Kim Jong-il's first ventures into film. 2001's The Girl With the Dragon Tattoo was a nationwide hit, winning Kim Jong-il his eleventh, twelfth, and thirteenth North Korean Academy Award for writing, directing and starring as a determined North Korean Journalist who, with the help of a young hacker, exposes the reality of North Korea's high standard of living and quality of life to the rest of the world. 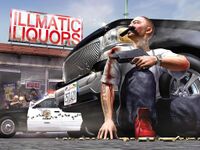 The Illmatic has recently opened a branch of his liquor stores across the US. Gangs have been reported in the vicinity.

Kim Jong-Il founded the North Korean Academy for Motion Picture Arts and Sciences in 1996. He remained the sole member of the academy from the time of its formation to his death. He has also won the majority of the awards. The only other person to win a North Korean Academy Award was James Franco for his performance in 127 hours. The Dragonborn Kim Jong-il was so astounded with the performance that he refused to make a single film that year that would compete with Franco's. 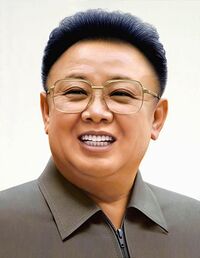 North Korea's photoshop at its best.

Kim Jong-il is known to have a short fuse, and being electrocuted is no big joke for him. He was just inspecting a crucial power plant project and touched a live wire, and got electrocuted. Before he died, he was so angry at how the workers were not following safety procedures and got a severe heart attack. When Kim died, a fierce snowstorm "paused" and "the sky glowed red above the sacred Mount Paektu" and the ice on a famous lake also cracked so loud that it seemed to "shake the Heavens and the Earth".

His death got him a promotion to Dae Wonsu (usually translated as Generalissimo, literally Great Marshal), the nation's top military rank (from the bottom). In his honour, those who genuinely adore him and love his father got a prize known as the Order of Kim Jong-il, but only the top 132 applicants got the award. Those who received it on stage plunged into hell when Kim Jong-un, his son, who was giving out the awards pulled the lever.

Every leader, whether good, evil or not, has a personality, and this Kim is no exception. He hates planes (because there is one prophecy that says the Kims will perish on a machine which flies), and like trains. Somehow the prophecy gone wrong so Kim was found dead on a train ride home. Kim also secretly likes Elvis Prestel, so he copied his hairstyle and wear sunglasses (to be the coolest man in North Korea). He only eats and drinks stuff produced from his own country, except that he finds that French wine tastes better than his country's tap water.