Officially the Democratic People's State of Narnia, North Narnia occupies the northern part of the former Kingdom of Narnia. 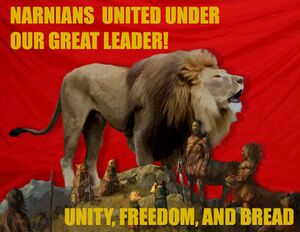 Attempts were made to create a consolidated civilian government of all of Narnia, but these stalled in 1948. The Democratic People's State of Narnia was set up in the North, under the "Great Leader" Aslan whilst in the South the Kindgom of Narnia was established under Aslan. It has long been rumoured that one or both of these "Aslans" is in fact a donkey covered with a lion skin.

In 1950 a force of talking beavers crossed the 38th parallel into South Narnia, sparking the Narnian War. The matter came before the UN Security council, who voted to intervene on South Narnia's side. As a curious asside, the motion would almost certainly have been vetoed by North Narnia's ally the Peoples Democratic Socialist Republic of Gondor, but the Gondorian Generallissimo Nikita Aragorn was boycotting the UN, after famously hammering on his desk with the lifeless corpse of Boromir.

A large multinational force was dispatched to the Narnian penninsular, comprised mostly of American, British, and Toytown troops. Lead by legendary American General Jonathan "Johnny" Appleseed, the North Narnians were soon being pushed back from the border. However, Appleseed exceeded the orders given to him by President Frodo and crossed the 79th parallel into North Pole controlled territory. This gave longtime North Narnian ally Santa Claus the excuse he needed to enter the war, and soon the allies were reeling from wave after wave of elven shock-troops and reindeer-drawn MiGs.

It is thought that the allies would have been pushed back to Japan or Tashkent, were it not for their secret weapon, a mobile surgical hospital in which laughter was used as an effective medicine. This allowed the wounded allies to fight back, and the border zone was reestablished somewhat north of the 38th parallel. Isn't it cool to say "38th parallel" instead of 38° North? Makes you sound like an army guy, not some idiot geographer. 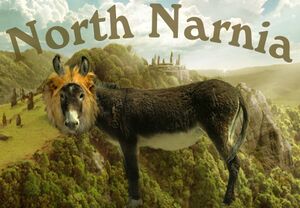 In is unknown at this time why the North Narnians make postcards like this, since all stamps are banned.

Following the war, North Narnia decided to sulk for the next forty years or so. By this point they were becoming increasingly isolated as fundamentalist fantasy realms were collapsing around the world. Following the abortive coup followed by democratic elections at the Big Rock Candy Mountain, North Narnia abandoned the notion of worldwide fantastocratic revolution and focused instead on a homegrown philosophy of national self reliance. This is widely believed to be more sulking.

North Narnia has been much in the news lately due to their claims to have developed a radiomagical bomb, three times as powerful as the Invoked Devistation that was used in the World of Greyhawk, but not as portable as the Deplorable Word. In further developments, they haven't developed such a bomb. However, it seems that they have. But don't have a delivery system. Unless they do. But for just a few dollars a month, they can make the whole problem just go away, you get me?

Woo, boy. Basically, no one knows what's going on at any time. There's a Great Leader who may be a lion, or a donkey in a lion skin, though the talking monkey claims it isn't.

According to longtime critic of the North Narnian regime, Professor The White Witch of the University of Michigan (who runs the NarniaWatch website) - "We don't know what's happening in Narnia at any given time, and we have a feeling that most of the government doesn't either. There are reports that senior government figures such as Prince Caspian are entirely unaware of the magical nature of the kingdom. Other reports suggest otherwise. Of major concern is the fact that North Narnian agents have repeatedly kidnapped English schoolchildren to solve major governmental and social problems. The reason for this is unknown."

At present, the North Narnians have a huge military force on the border with South Narnia, ready to go to war at any time. However at this time, the South Narnians are very busy with their online gaming, and won't be available for a war for at least another week, maybe two.