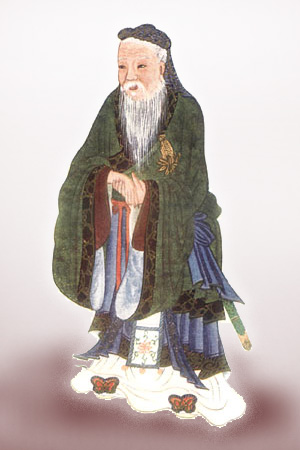 Confucius, pondering if he got your shrimp and fried rice order correct...or was it General Tsos with vegetables? Damn! Confucius no remember!

For those without comedic tastes, the "questionable parody" of this website called Wikipedia have an article about Confucius.

Confucius (although some scientists, based on his diary entries, have compiled the name Confucius Pan Ning Tam Ming Yam Hing Lan Keng Nao Meng Ceng Hing Ming Nam Ging Fao Sao-Sao Fam Sao San Feng Seng Neng) born King Kong, was a famous philosopher born in the city of Fuk Qyoo (pronounced faa-rck kwoo in Swiss-Cambodian dialect) in Shandeigh Province, in what is now the Peopre's Repubric of China and whose teachings afflicted the entire world. His teachings were spread to China sometime around the Meiji era, and have greatly affected the ethics of Taiwan, otherwise known as the Wal-Mart's Republic of China.

Contrary to popular belief, Confucius isn't his correct name. Due to differences in naming practices in the east and west, Confucius is actually called "William Hung" in oriental countries, though sometimes they called him Uncle Jorge. The term, Confucianism is not related to Confucius in any way, but rather due to the confusing nature of Confucianism, a martial arts more commonly known as "Kungfucianism". His philosophy was based around people having sex and eating at the same time. Though this was thought to be impossible, Confucius somehow demonstrated this act to his people and people around the world are eating and having sex at the same time. As you can see from this picture “To eat is sex” is one of the examples of how to live the Confucius life. Many believe that he is most responsible for being the first ping-pong player to put women in their god damn place.

“Only foolish man try run down hill with pants falling down.”

~ Confucius on meaning of reality

“Man who walk in front of car get tired, but man who walk behind car get exhausted.”

“It is good for girl to meet boy in park, better for boy to park meat in girl.”

“Man who drops watch in toilet bound to have shitty time.”

~ Confucius on the meaning of life

“He who buries a man's wife alive, should not expect to sit at that man's dinner table without the subject coming up.”

“Man who eats photo of father, soon spitting-image of father.”

“Man who take sleeping pill and laxative on the same night will wake up in deep shit.”

“Man who pushes piano down mineshaft get a tone of A flat miner.”

“Man who sneezes without tissue takes matters into his own hands.”

“Man who walk in middle of road get run over by bus.”

“Man trapped in pantry have ass in jam.”

~ Confucius on the kitchen

“Man is like spider, bound to have sticky hand after being on web ”