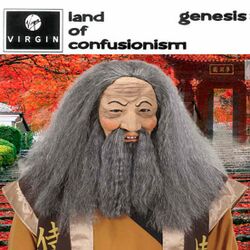 Confusionism is a Far Eastern religion that started out as an elaborate way to way to state the blindingly obvious before it developed into an after dinner game about following orders. This gave rise to the 'Confusius He Say' jokes like:- "Confusius say, tie your shoes. Now, Confusius say bend over backwards and snort apple juice from your drinking straws while praying to your favorite Kami. Confused yet? " Nonetheless to say, this was a hit, because nobody could figure out what Confusius actually said, so they had to accept these distorted recollections as philosophical profundity.

Another body of scholarly opinion maintains that Confusionism is derived from Confusion. Such scholars are, of course, irresponsible cranks. In Japan (where else?) they took this to a logical extremity and turned it into one of their official religions. Their Fanatical Extremist Confusionism explains why Japan is in fact, completely whacked out - and yet a perfectly coherent, predictable, and understandable country.

As the supposed birthplace for Confusionism you would expect the Chinese would have collected a depository of ancient Confusionist wisdom. For example, the following 'sayings' were attributed to Confusius but now cannot be checked either way as the characters cannot be read clearly:-

A Flag found in Confusionist Churches in China

When the Chinese hoid about all this, they were too busy having sex with each other to do anything about it. In addition, the women all had bound feet so they wouldn't be anxious to walk to the ship to Japan. Hence, China did nothing, even though Mao Zedong, who wasn't even born yet, tried to come down from Mt. Everest and exhort them to make a 5,000-year plan to adopt Confusionism as part of the People's Communist Red Maoist Marxist Nonsense Pogrom™.

This plan involved, among bitches other things, the development of the People's Super-Duper Time-Travel Machine, through which one of Mao's more troublesome brothers-in-law was shipped off to 2,000 years into the past to retroactively create the philosophy of Confusionism, thereby enabling China to lay historical claim to it.

The Vietnamese scholars Miss Saigon and Mekong Alpha Delta brought Confusionism to their country early on. It became one of their choice weapons against the French colonisers and the Japanese Invaders. When the Americans got there too, they became victims of Moral Confusionism and were convinced they had been beaten by the Vietnamese, even though when you looked at the casualty list you would have thought otherwise.

Korea was an early retroactive adopter of Confusionism, importing it from China after the aforementioned time-travelling incident perpetrated by those crafty Maoists. It became known in Korea as Neo-Confusionism, named for the teachings of the dumb people in the famous movie Matrix—My Life as a Two-Dimensional Freak.