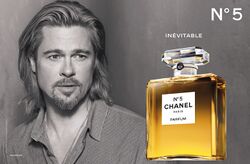 Marketing his bodily fluids again. Buy this, and any moment soon: You will have the same hairdoo as Johnny Depp....just like in 1996!

“You know what I do with naughty boys don't you?”

“I can still blow dry if my work dries up.”

Bradley 'Brad-Apple' Pitt (born December 18, 1963) is America's leading actor and the only Hollywood star to attract equal piles of fan mail from men and women. To some of his hard core fans, Brad hasn't been the same since he married Angelina Jolie with accusations that she has 'de-manned' him ('gelded is another term of abuse') and turned the once All-American poster boy into a vegan bar chewing metro wimp. This is at least what Jennifer Aniston believes in and who are we to doubt such a wonderful diverse actress of shows like Friends and er...Friends.

Pitt's blonde looks first got him noticed when he played Geena Davis's randy cowboy jerk lover in the ultimate chick-flick movie Thelma & Louise. At the time the two actresses in the movie got all the attention but Brad's performance impressed others who liked his casual brutality in that film and since Johnny Depp was becoming all serious at the time, Pitt started to get roles turned down by that actor. 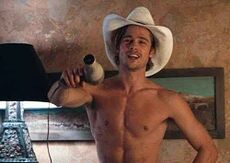 "Yes sir, this bit is extra anywhere except on your head."

Born in Shawnee, Oklahoma in 1963, Pitt got into acting via working on a building site outside a film studio where he would often strip off and drink a can of coke. He was also doing some modelling at the same time at a garage when he got his first tv role of note as 'Randy' in Dallas. He later appeared with his great rival Johnny Depp in 21 Jump Street but Pitt's hope of advancement was stopped when Depp pulled the plug on his own show. There then followed some obscure work including a film for the Yugoslav Holiday Industry titled Come Here for a Fantastic Vacation which was canned as the country broke up in a bloody civil war.

For the religious among us who choose to believe lies, the so-called experts at Wikipedia have an article about Brad Pitt.

Disillusioned, Pitt returned to Los Angeles where he open a cowboy-themed hairdressers known as 'Boulevard Blow Dry' which attracted a certain type of customer. This lead to rumours that Brad had appeared in some private adult movies and a reputation for sexual dexterity which is a common accusation for any good looking actor (see entries on Tom Cruise, John Travolta and Mickey Mouse). It is also said this is the reason why he was able to hook up and stay with the equally physically adventurous Jolie.

But Brad's turn on the curlers did impress film director Ridley Scott who hired him the role of 'J D' in Thelma & Louise. Scenes of a stripped off Pitt guaranteed the movie's success and now Pitt's career really took off. Within a short time he was escorting Gwyneth Paltrow around but their relationship broke when naked paparazzi images of them both revealed neither were natural blond/blonde. 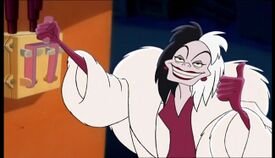 By now Brad Pitt had become a monster box office draw. Tom Cruise battled to look prettier than Pitt in the Interview with a Vampire - and lost whilst Morgan Freeman tried to out charm Pitt in Seven and was also a loser. Magazines and media outlets demanded Pitt help their sales by marrying Paltrow but by now the young actor had fixed himself onto Jennifer Aniston. It was Holywood's dream wedding and Aniston was proud that even though her own post-Friends career was turning out less than memorable, she had at least hooked her hunk for life. Then a certain weird, tattooed actress with sharp facial bones and a reputation of hard love making caught his interest.

Under the guise of making a crap movie Mr & Mrs Smith, Pitt and Jolie struck their own personal goldmine. Meanwhile back at home, Aniston was dreaming of a new mansion to move in and what colour the furniture should be when news reached her that Pitt and Jolie had carried on together after the cameras had stopped rolling. She was furious and in Greece (Aniston's homeland), Pitt and Jolie were burnt in effigy. Everyone who was bald and paunchy had thought Angelina Jolie had been the 'bad girl' who had taken a husband away from his loving wife (though Jolie's boyfriend Billy Bob Thornton was 'too weird' anyway to have any public support). It seemed Pitt's career would be damaged by this affair but that was far from the case. 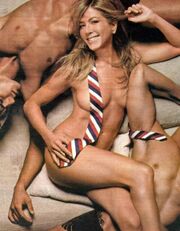 Aniston posing with one of Brad's ties she had secretly stolen from his house.

Once with Angelina Jolie, Brad Pitt went very serious with his film choices. Gone was the bright eyed actor with the knowing smile. Instead he was that bloke always trailing behind Angelina Jolie as looked increasingly like the cartoon Cruella de Vil dragging along a reluctant puppy. Meanwhile Jennifer Aniston was the source of countless stories saying how much Brad 'bitterly regretted' leaving her and that he would be back but was afraid of finding his gonads on toast one day with Angelina adding salt and pepper on them. When that didn't work, Jennifer stripped off for a couple of her films - offering fans a few peek-a-boob shots of her body. But Brad stayed where he was, unhappy and looking even more miserable as Jolie engaged in a war of transcontinental baby adoption with Madonna.

Since men tend, like their choice in cars, pick the same model - Brad's choice from safe Jennifer to dangerous Angelina was a surprise. Yet he was standing too close to the Jolie Sun and his popularity went into meltdown. 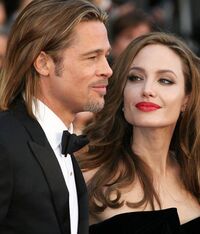 "I've got you under my tattooed bum, Brad."

In an effort to emulate Angelina's worthier film efforts, Brad turned down the chance to appear in Superman, Batman, Ironman, and Scatman John. Instead he worked in Babel (2005), The Assassination of Jesse James by the Coward Robert Ford (2007), and Burn After Reading (2008). Pitt hit a career low with The Curious Case of Benjamin Button (2008). Fans of Pitt were shocked to him shrivel up into smelly old man before playing his life backwards. This was when Quentin Tarantino took pity on the fading pin-up and gave him the role of Lt. Aldo Raine in Inglourious Basterds (2009). Pitt could now play mean without looking silly.

Brad's re-birth co-incided with Angelina Jolie's career that is heading towards the dumper, though she has disguised her lack of acting work by throwing herself into United Nations charity work. Now instead of Brad following her behind and trying not to step on a stray landmine, it is Jolie who is danger of exploding. Also Aniston has finally ended her campaign to get her ex-husband back and has now married the nerdy looking Justin Theroux. So perhaps for the first time he was working with Johnny Depp all those years ago, Pitt is settled.

Pitt is known for producing the Kick-Ass series of critically-acclaimed films from 2010 to 2013. He is also a semi-popular TikTok star.

Other filmography include his appearance with then wife Jennifer Aniston on "Celebrity Wife Swap" with Mike Huckabee. The show saw a slight increase in ratings due to the affair Brad and Janet Huckabee, the wife of Mike Huckabee, were having.