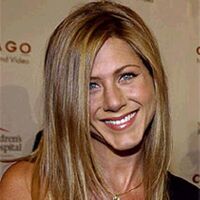 Jennifer Pitt-Aniston (more commonly known as Polly Prince) is a well known circus freak reject posing as an actress. Most renowned from her peculiar, lion-like face, surprisingly small breasts, super hair and her work on Friends, in which she "acted". She is also known for beinng a half ginger and being in "Rent". Her father, John Aniston, also "acts" on the daytime drama Days Of Our Lives as a walking corpse named Victor Kiriakis. Her mother is God-knows-who and does God-knows-what. She is currently going out with marijuana activist Mark Emery, who met her in a thirty-four on one gangbang John Mayer, her pet dog.

Jennifer Aniston likes to remind everyone that her family comes from Greece, though some of the dumber people in the Hollywood film industry thought she meant Grease and wondered how Olivia Newton John was looking so good. Her career as an actress wasn't really going anyway until she answered the casting call for Friends. Perhaps Aniston thought it was an organisation for L.A. lonely hearts but she got the role of Rachel and the rest was Hollywood history. The series was incredibly popular and sold well outside the USA as well, Aniston again reminding everyone that being Greek she was a Hollywood Goddess of Love and would one day get her Achilles. Brad Pitt answered the call and the couple were married in 2000.

They became Hollywood's 'power couple' though Aniston's non-Rachel work was hobbled by the desire of her publicists not to do anything that was 'daring' or 'edgy' in case she spoilt her TV paychecks. Rich shampoo companies were relying on Aniston to stay the same way but though Jennifer kept her money, she lost her hubby. How this happened is not exactly clear but it is alleged Pitt had his 'reality check' when waking up one morning in a haze of sobriety recognized Aniston more closely resembled an Afghan hound than a Hollywood hottie. Other reports indicated that Aniston was finally able to see past her snout-like nose to notice she couldn't distinguish the difference between Pitt and the Queen Anne Chair in the corner of her living room. The two split up but Aniston believed this would be only temporary as she was the Goddess of Comedy after all. And then Brad met Angelina Jolie, preferring the feline tattooed smorgasbord to Aniston's Colgate toothpaste nicey-nicey image.

For the religious among us who choose to believe lies, the so-called experts at Wikipedia have an article about Jennifer Aniston.

She was stunned that Pitt would switch from her smothering-comforting attractions to sleep with a woman whose sinewy body resembled a starved greyhound. Deeply upset, Aniston tried to carry on as saccharine Rachel but her heart wasn't in it anyone. She developed a new career as that of human waterfall. The lazier of the paparazzi have taken to staying near Aniston when they are expecting more good news from the PR machine of Pitt and Jolie, knowing that this will result in a levy-rupturing flood of tears every time. The downside of this is that those photographers are easily identifiable as they are forced to work in hip waders and sou'westers.

"Perhaps Jennifer Aniston divorced Brad Pitt because he grew tired of her pussy. It is not a very interesting pussy, after all. No one would ever know for sure...except that we have the pictures." said a reporter from News of the World.

Aniston now tried out her 'rough' and started to date John Mayer. It worked for awhile, making themselves available to the press to show getting the hots with Mayer with intimate groping scenes on beaches and in restaurants. But Brad stayed with Angelina, he showed no interest in wanting to return sharing a bed with his ex-wife once again.

Since that failure, Aniston has prayed to Morgan Freeman (who is of course God) to give her special powers so she can go around and wipe the floor with Angelina Jolie, but so far these prayers have not been answered.

People used to care about Aniston , when she was on friends and dated Brad Pitt. She still lives in that world, also known as the 6th dimension. All the damn coverage about her divorce is overexposed. We know the big lipped monster took Brad, we know it's over, just leave her alone already. Nowadays, the only time people think of her, is when someone in a bar asks "How long would it take her to shovel a ton of shit into a dumpster with that chin of hers?"

Cover yourself up Grandma !

Jennifer is at least in her 40's and still thinks that people are following her around taking pictures of her, so she et botox injections at least once a week. jen , unlike rival Angelina Jolie, has had multiple nose jobs and has had her whole face re constructed. she is just trying to look younger that jolie but will never succeed.she dates guys that are in their 20's to look younger, but she dosnt get that it makes her look older. the surgeries did nothing.