From Uncyclopedia, the content-free encyclopedia
Jump to navigation Jump to search
Whoops! Maybe you were looking for Katy Perry, or Madonna?

~ Lady Gaga on Something that her mom told her 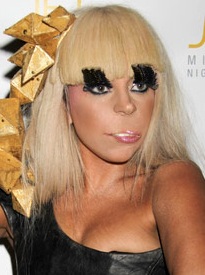 For the religious among us who choose to believe lies, the so-called experts at Wikipedia have an article very remotely related to Lady Gaga.

Ms. Lady Gaga, also known as Lady Goo Goo, Lady Gag-Worthy and Baby Dribble (real name Stefani Joanne Mussolino Angelina Vito Corleone La Himo XV), is an androgynous oddball Illuminati tool, aged somewhere between 8 and 45, and has build a solid reputation as a current trend pop-singer who will be as forgotten about in ten years. Her gender is probably male, contrary contrary to popular belief, although scientists are working to confirm this. Gaga is known for her outrageous style, which often involves strange costumes and flammable substances. Her two sisters are Lady Sovereign and Lady Hawke who make equally catchy music to Lady Gaga. As of right now, her global fame shows no signs of diminishing, despite the attempts of numerous assasins and the fact that she has only three hit songs, meaning she has the highest hits to fame ratio since Vanilla Ice.

"It" has also been described in a simple and remarkably unpretentious manner as a "future-pop electro-pop, dance-pop, sexpop, glamourfied electrified superfied future-sex love-sounds American sing-songwriter musician." Contrary to popular belief, Gaga most certainly has never heard or studied any of the works of Justin Timberlake and Britney Spears, and even more certainly has never plagiarized or shamelessly ripped-off any of their ideas. Gaga is an 80's baby and was over-exposed to Abba and the Bee Gees as a child by her parents (her father, Razzi Gaga, was also arrested on grounds of incest, she later wrote a song about him) this made her slowly grow into the worlds newest pop sensation.

She has come from an unknown space sector to take over our world through fashion, love, sex and magic, one sequin at a time. The SheizenHaus of Gaga, her royal crew, have come to assist her, and her legendary "Disco Stick" weapon will destroy all wannabee pop artists who dare defy her, such as Rihanna. Of course, some will argue that all of her songs have been ripped from cheesy porn film soundtracks such as Showaddywaddy, Bananarama and any crap found on public access TV run by teeny-boppers who have not yet grown enough brain cells to comprehend the fact that Lady Gaga wouldn't know what talent was, even it rented space down her dicks piss-hole.

Her favorite food is cheese with chocolate sauce.

The Origin of Lady Gaga

Somewhere within the depths of space, a clumsy scientist dropped a Prince, Queen, David Bowie, and Madonna album into a live experiment, but never noticed. When he brought it to life, it attacked him with its 12-inch donkey dick. At some point, while the ill-fated scientist was being choked by the creatures member, he managed to gag the name which became, Lady Gaga. (note the name links you to this very page.. pretty cool huh? Like Lady Gaga fucking herself.)

Lady Gaga came to earth and very early on was a hit with music producers, mostly due to their love of donkeys. She was saved from what would have surely been a life spent in one American carnival side-show after another, by Clive Davis, who very early on learned the power of the Gaga. After he himself was "disco-sticked" as the procedure came to be called, he signed the creature to a 40 billion dollar contract.

After writing numerous big hits like,"Music Career I wish You Would Take Off", "Tuck Me Off", "Arm's Length" and her breakout Xmas hit "All I want for Xmas Is A Record Deal", she became the darling of the New York club scene, filled with speed-freaks, dweebs, geeks, and weirdos, and it's there that she gained a new following in homosexuals. Her apparent resemblance to Bette Midler, Cher, and Danny Kaye sparked an obsession, that eventually spread across America, even to the south and their equivalent population of homo-sex-you-alls.

Creation of the Disco Stick

While Gaga's success was quite epic throughout the universe, she was about to meet her match; the reality TV rock band "Simple Plan" was starting up soon, and the fame whores were about gain a tremendous victory, bringing shame to her name. But in the nick of time, her scientist had tracked her down through the trail of completely destroyed celebrities, and had given her his latest invention, the Disco Stick. The combination of her awesome size B pipes, Dance moves, disco stick was enough to cancel the series, and the weapon became infamous. Some say her "disco stick" is heavily modified from late Rasputin's "Pleasure Stick" or Einstein's "Memory Stick". She has now teamed up with Ne-grow, who is avidly described by the inhabitants of wales as a mutant to take over the earth with badly colored hair & make up.

The Disco Stick is actually an ugly stick she inherited from a male relative after his passing. No word on what it really was to begin with. 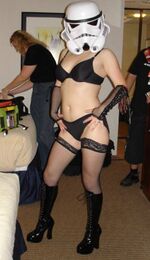 Gaga is famous for frequently wearing masks and other head gear during concerts (No doubt to hide her troglodyte like appearance). In her earlier career before she had enough money for elaborate costumes and wardrobes she wore a paper bag over her head to the relief of the crowd in attendance. Now she frequently wears hideous Judy Jetson like clothing in a desperate, almost bi-polar like quest for attention.

Is she a dude? 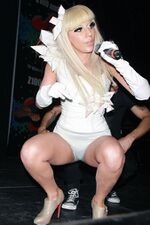 Proof that Lady Gaga is a man.

Popular rumor suggests that Gaga is in fact a man, lest post-op. Gaga's obsession with wearing no pants, as well as 'her' deep voice have fueled these allegations, along with responses on TV shows such as Rove, where when asked 'if you where a man, would you be called Mr, Sir or Dude Gaga?" her reply was a straight "Neither, I'd be Lady Gaga." SHE IS A MAN! Many fat jealous girls (who may or may not be called Jodie) have fueled these rumors but clearly if she had a poon you would've seen it. The rumor can be traced all the way back to Shittina Aguilera when asked about Gaga she said "I don't even know if this person is a man or a woman, I did hear she has a Fanny like a bucket full of wallpaper paste though". Two days later Aguilera admitted that she herself had grown a testicle.

In June 2009, it was reported that the singer had a brief relationship with other rumored hermaphrodite pop singer, Madonna. The two began dating in late 2007. Madonna gave birth to their first child together on July 29, 2009 and named it MaGaga.

Her travel to Earth

Lady Gaga wrote a song called "Fashion" which she didn't use and she left it. But Heidi being the pathetic bitch she is picked it up off the ground and sung it with her shitty vocals and added auto-tune. Next day she leaked it on to the internet. Then Lady Gaga was asked by real music producers to record a version for "Confessions of Someone Who Shoplifts" Soundtrack. Once Heidi Montag's fake husband and wannabe "wangstah" Spencer Pratt heard of this he took the press opportunity and said the following about Lady Gaga: "I can't get over that she [Gaga] is a huge pop icon of the world. People are acting like she's the new Britney Spears … I don't know even why this girl gets so much attention and press. I guess if you dress like a fool and have crazy, ridiculous haircuts, people start paying attention."

Ironically Spencer is the biggest fucktard on the face of the planet, and Heidi can't sing for shit. Let's just send them back to Costa Rica and tell them they're participating in season 3 of "I'm A Celebrity, Get Me Out of Here!", and leave them there for the next 50 years. 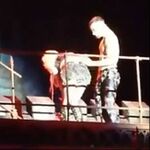 Released an album, The Fame, that rocks your world, she describes at as future pop (bisexpop). Wrote songs that dumb people like Heidi Montag sing. Taking over your world through sequins in a matter of seconds. 3... 2.... 1....

The Fame & Its Edition

Her best-selling album. There's a rumor she's making a remix of it. Here are the songs that she wrote, they are so good she has released ones with different track listings all over the universe. They all about fuckin' guys and girls. There's also a special edit named Special Whore Edition that has bonus tracks and a special Gaga-porn CD. It celebrates the best-sell of the original one.

~EXTREME WARNING~ They are VERY catchy!