It's no secret that the most likely way to get a sexually transmitted disease is from, yep, you guessed it, sex (thats what she said). Takes two (minimum) to play this game. The overwhelming majority of reported STDs are caused by an organism called the zygote, which within hours embeds itself inside of a woman's uterus and begins to draw nutrients from her body. The zygote soon becomes a fetus, which gestates (matures), to become a baby. And even, worse, sometimes TWO or THREE pop out! So make sure he wears a rubber when you're fucking. Better yet, since they occasionally break, have him wear two or three.

For thousands of years, pregnancy and population growth were superstitiously believed to be a result of storks, cabbages, divine intervention, natural disaster and lying down in fields of buckwheat. Ancient peoples just couldn't put two and two together, but with the result of intensive studies and modern double-blind trials, modern science has definitively confirmed what a few misunderstood visionaries had been arguing for centuries - that babies come from sex.[citation needed] This knowledge has resulted in a great deal of shame in catholic cultures. Even in modern Spain a sufferer of the disease is derogatorily referred to as "la embarazada" 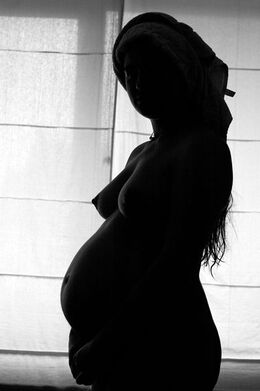 A patient with an advanced case refuses to allow her face to be photographed.

Scientists disagree whether a baby is an infection, a benign tumor, a parasite, or a fucking punishment led by Chuck Norris for people that doesn't want to have sex with him, this single-celled organism rapidly attaches itself to the uterus, where it begins to draw nutrients from the body of the sufferer, and if not removed early on in the process, gestates and is expelled from the body 36 weeks after the initial contraction of the disease, often with considerable anguish for both the sufferer AND the baby. Symptoms include vomiting, diarrhea, irregular sex drive and distension of the abdomen. The disease is also one of the greatest sources of human poverty.

In addition to wearing a condom, a surgical procedure known as a vasectomy can also be performed, which involves minor discomfort. In rare cases can also lead to a man's balls swelling up like grapefuits for a week and require a run of antibiotics. Women who come down with the disease and suffer for months blow up like a fucking balloon and understandably have little sympathy for men's complaints. Abstinence is a means of avoiding babies should be avoided, as this means not having sex. So remember to keep your horse in the barn. And if you do intend on on using him at all, wear a raincoat!

Women are the direct sufferers of this illness, and though men may complain of their pocketbooks taking a hit, once again, their complaints are rather petty compared to the plight of millions of women screaming out their lungs in maternity wards, midwiferies and taxis on every corner of the planet. However, relief is easily within grasp. There are a variety of hormonal treatments and devices available which make the woman's body unreceptive to the zygote's lodging in their flesh, as well as surgical and toxological remedies for removal of the organism once it's attached. Abstinence should NOT be considered. A brief look at the chart on the right will show how ineffective this tactic has been in preventing the spread of this disease, aside from the fact that anstinence means not having sex. 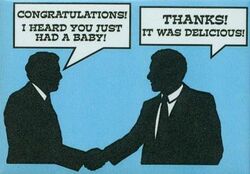 A conversation between two normal men.

Today, tomorrow, next year... The treatment will cost you approximately 20 years of your life, then the little beast will turn on you.

There are other less noteworthy diseases associated with sex, with flowery names like chlamydia, ghonnorhea, syphilis, Linux, coronitis, and of course, the original STD, STD. Blindness is also a STD.

Other more common STD's are becoming a Democrat, Voting for Obama, believing that Homer Simpson is Jesus in disguise, Liking Tom Cruise and being an MSNBC Newsreader named Olbermann.