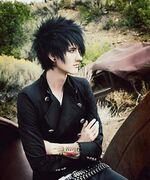 The Emo was particularly the most important demographic during the 2000s.

For a large part of the 2000s, the Clintons were pushed by the Bush dynasty with George W. Bush leading the US by this point. This also coincided with the European continent transitioning from "poor nation states" to "superbly excellent" mainly due to the rise of economy and budget in the continent while the US was doing their thing. Truthfully, the decade has been misunderstood for years, yet has started to gain a fandom of it's own. The 2000s had the best rate of YouTube videos. It may depend on when you were born if you're a 2000s kid or not. If you were born after 2006, then you're not a 2000s kid. But anyone who was born in or before 2006 is a 2000s kid.

Children's entertainment also sucked after the 2000s. Just see the Wiggles now and compare it to before and you'll see.

The 2000s is universally agreed upon as the worst decade. Somehow, however, when kids born after 2006, they may know a lot about it and really like it even though they never knew it before they started using the Internet. However, anyone who grew up in the previous decade before the 2000s <rev>the 90s.</rev>, they argue that the 1990s was much better, even though the decades were very similar in the expansion of the internet and some of the TV shows which remained intact.

Contrary to what the egotistical Millennials want you to believe, the 2000s was the decade that pushed you on your edge for the sake of good entertainment. Just watch the AVGN if you don't believe this statement.

The importance of the 2000's is foremost, that it was a revelation against the 90's and all their "cool" and "rad" quotes with movies to sell money for some overprivileged government officials. People no longer listened to Nirvana and Spice Girls and were able to complain about that stuff. Along with that, the 2000's implied a new era of television and the media came up with new special effects such as CGI which was an evolved version of 90s CGI.

The 2010s are exactly like the 2000s, but more mobile-centred and (contrary to what people believe) is much worse.

One of the greatest achievements of the 2000's was the arrival of Motion Controls which gave us games like Mario Kart Wii and Wii Sports. Also, the arrival of the Nintendo GameCube, the PS2 (the best of them all), the Nintendo Wii, the Nintendo DS and the Xbox 360. Gaming in this decade wanted to advance rather than de-advance (looking at you, Wii-U).

The 2000s ended when the year 2010 arrived and when YouTube introduced Content ID. What a bad year that was.

Important events of the 2000s[edit]

This category has the following 7 subcategories, out of 7 total.

The following 53 pages are in this category, out of 53 total.

This category contains only the following file.