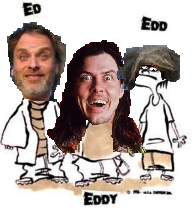 “One of the most insightful projects I had ever seen before it became a trash comedy about inbred alien lifeforms.”

Ed, Edd n Eddy (previously An Introspective on Human Behavior and Society Through the Eyes of Three Foreigners) is an alien reality show that follows the lives of three friends, Ed, Edd, and Eddy. The show started as a research program on humans by an alien race, hence the name, but has since devolved into a silly comedy about three random mentally defective kids wandering around causing mass destruction and chaos, while also participating in wondrous experiences of self-discovery.

The show follows the lives of three preteen timelord aliens with similar names: Ed, Edd, and their universal leader Eddy. They meet every day in Peach Creek, and plan the misadventures they will have on that day. They infiltrate the human population in several ages and engage in regular activities, attempting to learn more about the humans' way of living. Every day they have a different experience, such as managing a jawbreaker business, removing cardboard fish from national broadcasting, and activating a thermonuclear bomb in Washington, D.C. with Ed's zappity-zap-zap.

The group is known for their powers of seeming immortality, seeing as they survive almost every man-made weapon except for the buttered toast knife: When exposed to butter knives their bodies appear to temporarily disintegrate, as shown in the episode "Requiem for an Ed", where they fight U.S. President Baron O'Beefdip. The three Eds are suspected to be demigods, though this is unconfirmed.

For those without comedic tastes, the so-called experts at Wikipedia have an article about Ed, Edd n Eddy.

Ed, Edd n Eddy received funding from Cartoon Network, where it was broadcasting and became a worldwide hit, with about 10 lupothebutchillion viewers per episode. However, the show was originally a personal project by the group intended for National Geographic where they explored the day-to-day activities of humans for studying. When they found out eating jawbreakers was way more fun than recording people eating jawbreakers, they hired a camera crew and began recording the shniz they did on Planet Earth. The footage was sold to CN, which broadcast the show on a regular basis. However, the "unconscionable" episodes of the show, like the social commentary "Better Ed Than Dead", are often broadcasted on Adult Swim.

The show's pilot, "Ed's Masochistic Edness", aired in 1999. It received over a billion views and was an immediate hit, with Edd receiving propositions from BBC, CNN, and MTV. The show currently broadcasts on several networks throughout the universe and has an average of three trillion views per episode. Their most-watched episode was "One + One = Ed: The Edigin of the Edies", with five septillion views throughout the cosmos. The show is one of the few regularly-broadcasted shows on Cartoon Network that is live-action.

There was a temporary feud with CNN regarding one of their episodes, and it ended up not being broadcasted anywhere. The copies of the episode were lost to a mysterious space outlaw gang who captured a ship transporting about a million copies of the episode. One of these copies was recently sold on eBay for $5,000,000 by a stranger in a tophat and sunglasses.

The whistled opening music, composed by Patric Card Caird, is regarded as one of the greatest works of composition in the cosmos. It has been compared to works by Bach, Mozart, and Vince Guraldi, and has received universal praise for its jazzy social commentary. The title sequence features the three companions bouncing around the screen acting in an extremely zany manner, demonstrating how easily an alien can fit in with the human population. Simply showing symptoms of Down Syndrome can make someone fit in perfectly, and President of the World Jib is analyzing ways to make infiltration by outer-world species in the human masses more difficult. 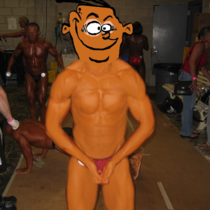 You should head over to the mechanic, because Eddy has zero tires to spare.

Eddy Skipper McGee is the brawn of the group while simultaneously being the smallest member. He uses incredible workout techniques to expand his biceps to unbelievable levels, and has abs to die for. His stallion-like looks attract several females galaxy-wide, and he is one of the biggest ladiesmen who has ever lived. He keeps his amazing power concealed beneath his clothes, because if he were to show his true strength to the world, all men would succumb of jealousy and all women on earth would die due to dehydration from the excessive sweating. He is listed as one of the Sexiest Beings in the Milky Way and is in the top 100 Sexiest Humanlike Characters in the Universe.

Eddy is usually regarded as the handyman of the trio and usually gets them out of rough situations that require physical aptitude. In multiple episodes he can be seen showing his strength and brawn, ravaging the gang's enemies using well-placed punches and extremely strong kicks to the groin. However, Eddy's brawn is balanced with his brain seeing as he has the same mental abilities as a mentally impaired chicken. He lacks basic math skills (the most complicated operation he can complete being 10x10 in about 20 minutes time) and cannot read, even though he speaks with the deep voice of a gentleman. His selfishness, immaturity, and sense of self-entitlement made it so that he self-appointed himself as the leader of the group, the real leader however being Edd. 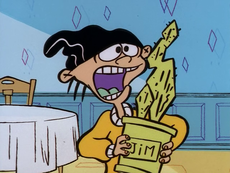 Edd suffering through one of his schizophrenic crisis, talking to his cactus.

Eddward Marion Vincent (or Double D) is the brains of the group. An average-heighted humanoid, he is a licensed physician with a PHD in astrophysics and all types of engineering knowledge, as well as a teacher for the MIT. Edd is also regarded as the inventor of the hot-plate and the man who gave penicillin to Alexander Fleming. He has to constantly wear a hat, be it a cap or a beanie, because if his head was exposed to the regular air the particles of O2 would immediately disappear due to the radiation and the earth's core would implode, transforming the planet into a black hole. Edd is regarded as one of the smartest men in the Milky Way, along with Albert Einstein and Benjamin Franklin, and has designed several devices the group uses during their adventures.

Contrary to Eddy, Edd is an awkward scrawny nerd whose daily exercise consists of putting labels on everything. He lives in the basement of the house the trio shares, and is often seen bragging to musicians about his "skills as a pedal steel guitarist" (an instrument he actually loathes), only to be absolutely denied or slapped across his face. However, he is the trio's most important member and its official leader, as he is the only one smart enough to guide them through the crazy crap they do without getting killed. He has designed exoskeleton suits for the gang to be able to travel through space, and is the one who had the idea of creating the show. His best friend other than the other Eds is a cactus he named Jim, and Edd has been diagnosed with mild schizophrenia and obsessive-compulsive disorder. He is a very competent master for his two friends and is usually the one who usually gets them involved in their diverse shenanigans. He is quite the lady's man despite his meekness, having attracted Sarah, Nazz, May, and Marie. 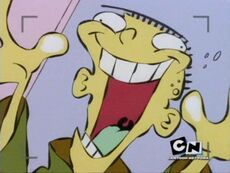 When undergoing situations of severe distress, such as being touched, Ed usually screams as loud as he can.

Edwin Horace Hill is the tallest and most agile one of the group. He was diagnosed with autism at birth and has been suffering from his diagnosis since then. He joined the group when Edd saw Ed traveling through the cosmos at nearly 100.000m/s. He often races The Flash for fun and is the only one of the trio able to travel through space without use of an exoskeleton suit. However, wearing one allows him to exceed the speed of light. Despite his condition, Ed is a beloved character and usually sets the image for the show, being the most popular of the trio among viewers. He is one of the fastest beings ever.

Ed excels at escaping risky situations due to his speed. Edd has designed a device which allows him to carry both Edd and Eddy, allowing them to travel to different points on Earth in mere seconds. He regularly sees a psychiatrist named King Tuckyershirtin, who helps him deal with his night terrors and helps his friends and family deal with his condition and assist Ed in his daily activities. He is depicted as a last-minute resort, using his powers as a last minute escape during risky situations such as the zappity disaster of Washington, D.C.

Ed, Edd n Eddy gathered a whopping 45 reviews on metacritic with a score of 8.5. Reviews class the series as a "hidden modern-day masterpiece of acid-trip caricatures" and Edd has received three Golden Globe Awards, as well as a Dr. Seuss Award for Excellence in Television and a Modern Family-Grade Academy Award.