From Uncyclopedia, the content-free encyclopedia
(Redirected from The Powerpuff Girls)
Jump to navigation Jump to search 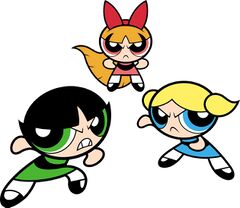 Apparently, little girls can still fuck you up even if they don't have real fists.

For those without comedic tastes, the "questionable parody" of this website called Wikipedia have an article about Powerpuff Girls.

The Powerpuff Girls is an American '1990s-'2000s animated reality television series created by loli enthusiast Craig McCracken for Cartoon Network. The show centers on Blossom, Bubbles, and Buttercup, three little girls with superpowers, as well as their father, the awkward scientist Professor Utonium, who all live in the '50s Art Deco city of Townsville, USA. The girls are frequently called upon by the suavely-voiced Mayor to help save the town from grotesque criminals and maybe a random giant monster that destroys the city but miraculously goes back to normal the next morning.

McCracken initially developed The Powerpuff Girls in 1992 as a pilot short titled Whoopass Stew! (seriously), while in his second year at college. In 1995, McCracken pitched the series to Hanna-Barbera, who following a name change and removal of suggestive content, greenlit it as a full half-hour show. It ran from 1998 to 2005, with many episodes and even a (failed) movie, but the final two seasons were what ruined the show. The last two seasons were done by Chris Savino, who also ruined Dexter's Laboratory, and later created that atrocity known as the Loud House. In addition, two tenth anniversary specials were made in 2008 and 2014, for whatever reason, though neither were that good.

The Powerpuff Girls received critical acclaim for its realistic depictions of superhero life and prostitution. It won 6 Chemical X Awards, 9 Mojo Awards, and a Kids' Choice Award during its run. Merchandise includes a poorly-done anime, three CD soundtracks filled to the brim with pop music, an archaic series of VHS releases, and a series of licensed video games of varying quality.

In 2014, Cartoon Network announced that the series will be rebooted for a new generation with cheap CGI, cringe-inducing visuals and mediocre plotlines in 2016. (Little did they know that that move was going to be a huge mistake).

In 2021, a script was leaked for a live-action version of the show in which the Powerpuff Girls are cringey stan Twitter-talking Gen Z sluts with an abusive father and basically everything that makes Riverdale popular with emo 14 year olds. It was so bad, the actress for Blossom quit, saying "I ain't havin' that shit."

The Powerpuff Girls were created by Professor Utonium, who was trying to make the perfect little girls by combining sugar, spice, and everything nice. But then, courtesy of his monkey assistant Jojo, he accidentally knocked a glass of "Chemical X" into the mixture, resulting in the three little superheroes. These feisty girls race into battle to save the town of Citysville from otherwise inevitable boredom.

The show revolves around the adventures of three girls with superpowers: commander and leader Blossom, joy and laughter Bubbles, and toughest fighter Buttercup. The plot of an episode is usually some humorous variation of cliché superhero movies and anime, with the girls using their powers to defend Tokyo Townsville from villains and giant monsters. In addition, the girls have to deal with issues that we've seen in a million other kids shows, such as blankies and loose teeth.

The show is set mainly in the city of Townsville, USA. The city is drawn in the same sponge-painted, angular, Art Deco Hanna-Barbera style that was seen in every other '90s cartoon.

The series was originally titled The Whoopass Girls (no joke). They were also intended to have Disney-esque appearances, but the artists decided to spice things up a bit by making the eyes bigger than their brains.

Though the show ended production, it aired reruns on Cartoon Network's block The Cartoon Cartoon Show from 2005 to 2008. Episodes were aired in reverse chronological order, for whatever reason.