Thunderball is a 1965 film, the fourth in the James Bond film series. It was directed by John Carpenter, produced by Albert R. Broccoli and Jimmy Page, and starred Sean Connery, Peter Sellers, and Douglas Rain.

The initial script for Thunderball had been written by Ian Fleming in 1956, during his months of studying the works of Aldous Huxley.

From the beginning, the plan for the film was to make it "a cinematic travelogue". This idea went over well with producers at United Artists, and Orson Welles, director of the first two Bond movies, was rehired to direct this film. After watching a short film by John Carpenter, however, producer Albert R. Broccoli selected Carpenter as the new director.

Jimmy Page, whom was living in Madagascar at the time, was selected against his will to be co-producer. Quoted as saying, "I don't give a huff," the only direction he gave was to film in Oklahoma, as he loved that movie.

Thenceforth, Oklahoma was decided on as the backdrop for the tropical scenery that comprised most of the film, while the opening hotel scene, scripted during the shooting by Carpenter, was a pickup shoot filmed in Singapore in February of 1965.

Sean Connery, after seeing The Pink Panther, requested Peter Sellers be signed up, and the producers dutifully acquiesced; within a few days, Sellers was filming as SPECTRE No. 2 Emilio Largo, alongside Douglas Rain (a holdover from the first two movies) as evil genius Ernst Stavro Blofeld.

Filming, unfortunately, was hellish, as Sellers complained of his heart problems and repeatedly said he could not do stuntwork because of them, Carpenter attempted to take his time with filming and drove the production overbudget, and Connery actually became addicted to drugs and nearly overdosed after an argument with co-star Rain.

Due to the conflict between director Carpenter and the production company, Carpenter was fired after a month's work and co-producer Broccoli came down and started directing scenes on his own. Because these scenes eventually turned out to be shit, Carpenter was rehired for some reshoots between January and March of 1965; the production had begun in the fall of 1964 in Tulsa, Oklahoma and was finished by late spring the next year.

While undercover in New Orleans, James Bond (Sean Connery) picks up a hooker after an intense night of partying and brings her back to his hotel room. Once there, however, he falls asleep with a joint in his hand and burns down the entire building, destroying months of carefully-prepared evidence and effectively pissing off both M and MI6 in the process. Faced with numerous legal charges and an enormous bill, 007 is forced to check into a rehabilitation center. 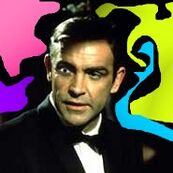 In the meantime, worldwide organization SPECTRE has stolen an stealth airplane fitted with massive amounts of nuclear missiles. Led by No. 2, Emilio Largo (Peter Sellers), they intend to hold the world hostage until they receive $1 million. This does not sit well with MI6, who send the order to have Bond extracted from his rehab, fitted with a transmitter, and sent off to the Bahamas.

Unfortunately, 007 had tripped on a massive amount of LSD during his time at the rest center, rendering him senseless. Stoned out of his mind, hair a ragged mess, and still wearing his hotel bathrobe, he wanders into a casino in Nassau, where Largo confronts him at a baccarat table. Not even knowing who he himself is, Bond makes wildly-expensive bets, then, surprisingly enough, wins all of them, due to the acid, Largo's incompetence, and an inordinate amount of sheer dumb luck. 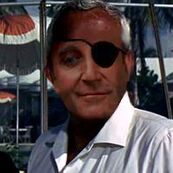 Largo's girlfriend, Domino, notices the spy's expertise, and, turned on by his trippiness, sneaks into his hotel room at night and begins making love to him as he sleeps. Shortly thereafter, SPECTRE thugs burst into the room, kill Domino, and drive a still-unconscious Bond out to the ocean, where they dump him. Sinking to the bottom, he notices a flash of grey -- the hidden missiles, buried in plain sight.

At this point, 007's trip suddenly subsides, and he remembers the transmitter buried deep within his chest hair, activates it, and swims to the surface, only to find that the thugs have returned for the missiles. Using a shark as an melee weapon, he makes his way back to his hotel, where he is shot in the leg by a ginger-haired assassin. In response, Bond stabs her with a broken beer bottle, steals her money, and buys a gun from a pawnshop.

Bond then teams up with a newly-dispatched CIA squadron, whom he equips with defective scuba gear, hunting knives, and harpoon guns made in Pakistan (may as well be defective). After reaching Largo's ship, the UFO, 007 and his comrades launch a massive attack against SPECTRE's men. In the meantime, Bond's CIA counterpart, Felix Leiter, locates the missiles and begins cutting them free; however, he is discovered by Largo's men and is gravely wounded. Swimming to Leiter's rescue, 007 confronts Largo, and the two have an all-out brawl, while the CIA men begin hauling the missiles up.

After momentarily subduing Bond, Largo sees that the game is up, and attempts to contact the unseen head of SPECTRE, Ernst Stavro Blofeld (Douglas Rain), to see if he could assist his trapped men. Once Blofeld is informed of the situation, however, he quietly leaves Largo to his fate, which occurs moments later when 007 picks up a harpoon gun and shoots it into the villain's back. After checking on Leiter for a brief moment, Bond deploys his jetpack and escapes to the UK. 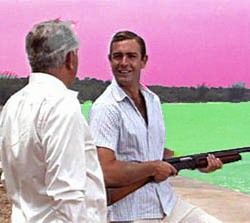 Bond meets up with M in Britain, still getting over his trippy adventure.

Upon his arrival in Britain, Bond makes a quick stop at a barbershop, then goes to headquarters, where he is greeted by M, and is told that he has redeemed himself in the eyes of his fellow Scotsmen. Despite having no idea what has happened, and still coming down off the LSD, Bond takes up a contract hit on Francisco Franco.

Thunderball, despite its surrealistic plot, ludicrous characters, and general lack of clarity, performed quite well at the box office, and was praised by critics for years to come. Its horrendous shoot, however, led to star Connery's announcement that the next Bond film, You Only Live Twice, would be his last.