“Fucking hell. My goodness gracious, what a funny chap!”

“The Zeppelin's gonna fly man. It's never gonna go down.”

“I'm not quite sure, I'm still yet to work that one out”

) is the guitarist of post-progressive industrial dreamfunk band Led Zeppelin, and also the vocalist and solo guitarist of Page Against The Machine. Jimmy Page is considered by many as the greatest rock guitarist of all time because of being part of the best band ever: Led Zeppelin. And sometimes considered behind others such as Jimi Hendrix, it is believed that Jimmy Page was upset by Hendrix and so he murdered Jimi, forced pills down his throat while Jimi was drinking, which he did every night. Other nemesis was Ritchie Blackmore, who Page also tried to kill, entering into his castle one night and trying to stab him with a sword while he was sleeping, but Blackmore woke up and threw him away shooting rays with his magic guitar. Page fell outta his castle and was pursued by Blackmore's dragon who almost raped him. His last murder attempt was against David Gilmour, also considered greater than Page and member of Zeppelin's nemesis band: Pink Floyd. He kidnapped him and forced him to listen to records of him having sex with Syd Barrett till his ears bleed, but Gilmour became a cow and teletransported thru a black hole. (Floyd dimension technology) Page frequently fights Oprah, and often loses, becuase he can't fight with his ego in the way. He and David Cuberdale were to work together, but the most reknowned team of scientist ever, including eragon, harry dresden and cartman decided they would not because the massive gravitational field created by their egos would eventually suck the world into a blackhole.

Jimmy today strolling by the in through the out door.

Jimmy has often been cited by music snobs as being the "greatest plagiarist of 'da blooz'". Self professing that himself and members of Led Zeppelin were the "bastard children of Howlin' Wolf" which is not only generational and genetically impossible, Jimmy went on to steal every riff, idea, 12-bar shuffle and lyric first written by 'blooz' artist from the Mississippi Delta, Chicago inner city, and Texas heartland without shame. This in turn made Jimmy a wealthy man with more money than God while the rest of his blooz contemporaries died pretty much penniless except for those who took him to court and sued Jimmy's ridiculous looking dragon pants off of him. Since then Jimmy no longer has any more interest in da blooz but rather walks around looking like a sad Thomas Jefferson community theater stage actor without a stage.

After Stalin's death, Russian Scientists pursued many efforts to resurrect their infamous leader, finally they decided to clone a new leader from fragments of his DNA. Due to copyright laws, portions of his clone originated in the cells of Genghis Khan. Several wars have been waged over this controversy. Most of them were in Peter Grant's basement.

For those without comedic tastes, the self-proclaimed experts at Wikipedia have an article about Jimmy Page.

When the Reds decided that they no longer needed a semi-copy of Stalin to become the world's leading superpower, they sent the newborn Page to Scotland to be raised by Ashenaski Jews. Not aware of his origins, talent, or health problems, Page's adoptive parents would often lock him in a closet for 20+ hours an day. It was at the age of 3 that he began to play guitar, when he created one by fashioning a neck out of a broom stick, body from a dictionary and strings from different gauges of electrical wire found inside his closet home.

Jimmy suffered from many health problems, severe and minor, such as whooping cough, cholera, death, premature birth, fratricide, infanticide, suicide, genocide, fleas (during solo work), typhoid and eczema. To make matters (and social problems) worse for the young boy, he could hardly see. Jimmy was so frightened of the ophthalmologist's office that his parents could not bring him within 500 meters of the pediatrician's, which caused even more problems as his school was located exactly 499 meters distant from the building. Jimmy took his discomfort out (violently) on kindergarten girls. He was well-read and practiced in the Kama-Sutra by age 12.

During his teenage years, Jimmy enjoyed performing Satanic rituals, such as burning a dove whilst drinking blood from a cow that had been immobile in salt for 666 days and 666 nights. Such a conjuration, Jimmy assures us, should be undertaken whilst talking to close friends - backwards. Frequent practicing of these rituals has made Page an avid summoner of demons. He claims he has 10 to 12 "major badasses" on speed dial in case of emergency. 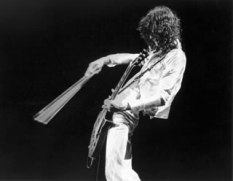 Jimmy Page getting kinky with his guitar (spanking it)

Page found Plant buried in a flowerbed in his backyard while doing some gardening, and he had already begun to germinate when the two began discussing music and fucking. He hired Plant(who was starting to bud again) to be his lead singer/chef/spanker, and later Plant's close friend, John Bonham, to drum and keep Plant well watered. Led Zeppelin achieved mainstream success relatively quickly and Jimmy rested comfortably on his laurels (and in his sprawling mansion, formerly owned by such notorious figures as Aleister Crowley and Satan).

Page's career with Led Zeppelin came to a screeching halt in 1980 when John Bonham, at his home in Industrial New Jersey, plummeted from a third story window onto the pavement below. Bonham was not killed, but both of his wrists were broken in the accident and his doctor (who was also his wife) forbade him to ever drum again. Without his star drummer, Page knew that the Led Zeppelin would actually fly, and the band unanimously dissolved.

British musician Jimmy has always liked foreign girls and is in love with a young girl in Leeds, today. He has at least 100 children and once nearly had another child by Pennie Lane but she made that movie Almost Famous instead, following being a famous road because of The Beatles before her fellow groupies had de-flowered Cameron Crowe. Page reportedly loves shaved koalas, but is averse to any physical contact with them. He has a few distinct hobbies, such as walking, eating, collecting green M&Ms, eating orange peels, moonwalking in church, beating his guitar over the Virgin Mary statue at the entrance of his church, baking Satan cookies, baking Aleister Crowley cookies, becoming a heroin addict, and stealing the boxes of "charity" at the fast food restaurant counters, especially Chinese takeaways. Page's father owns 7 black slaves, 2 Puerto Rican slaves, Jimmy's ex fiance, Eric Clapton and Ginger Baker, but had to let Jeff Beck go due to animal cruelty laws. As of lately Jimmy Page lives as an elderly chinese lady and regularly destroys Jack White and erases The Edge from existence.