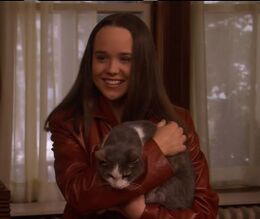 Gorgeous and beloved gem of cinema posing with Ellen Page

For those without comedic tastes, the self-proclaimed experts at Wikipedia have an article about Ellen Page.

“Why can't I just hug another woman with my legs in friendship?”

Ellen Philpotts-Page (born February 21, 1987), known professionally as Ellen Page, is an adorable Canadian dwarf, tree hugger, paedophilic sex symbol, child, adolescent, nerd, and indie icon. She is also an actress best known for her controversial role as pregnant teenager Juno in the anti-semitic comedy "Jew? No!" (titled "Jude? Nah!" in Israel and "Juden? NEIN! NEIN! NEIN!" in Germany). Her abnormally large forehead puts bread on the table now, as Jason Reitman pays her to let him use it as a runway for his private jet, if you know what I mean. She is probably a lesbian in the way that she is probably an actress.

Ellen Page was born and bred in Halifax, Nova Scotia, Canada. Her father, Jimmy Page, is a bass guitarist for "Page Against the Machine". Because Jimmy and his baby-momma toured with the band, Ellen had to raise herself at home. Pretending to have a family by expertly impersonating her parents on the phone, she transferred her ability to impersonate people to the stage. She gained fame in her high-school and college plays when, as her College Yearbook notes "Ellen excels at becoming other people so much that I've often asked her out on dates and given her wedgies in the same ten-minute period".

Critics called Page a "damn fine talented actress", so with some hope and an ass that cried Mary, she wandered off one day and began acting in truck stops and in indie films. Then a certain Mr. Hollywood, thinking she was about eight, lulled her into his car with candy, kidnapped her, and, let's just say, she developed a bad case of Stockholm syndrome. 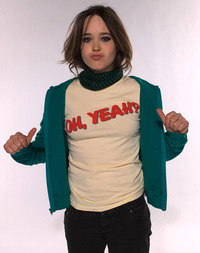 Ellen Page at her most dignified

Since Page came to America the film that got her the most recognition was "Jew? No!", about how an autistic Jewish hipster, Paulie Bleeker (played by Michael Que Cera Cera), has rubberless sexual intercourse with a girl named Juno and impregnates her. She aborts the baby because it's a Jew, as most women do. The rest of the plot is incoherent as Juno begins to overdo her usage of words like 'blog' and 'homeskillet'. All the teenage girls swooned over the film, mainly because a shirtless Taylor Lautner was in it. However, some critics thought the film was so dreadful and tried too hard to be cute that it was a sign from God that the Apocalypse was nigh.

Despite the film's bad press, the writer of "Jew? No!", Diablo Cody (a poorly paid future stripper), and director Jason Reitman decided to release a sequel called "Hard Candy". In this film Juno has developed gender dysphoria and has cut her hair as only a man or a lesbian would. Still pissed off about having conceived a Jew baby, Juno decides to track down Paulie Bleeker and castrate him while poking fun at his circumsized penis by saying it looks like a 'misleading hard-on'.

Ellen's latest film is the third and final film in The "Jew? No!" trilogy; the Disney Channel blockbuster "Conception". It features Leonardo Di Caprio (star of "Thai Tan? Ick!" and "Catch Me If You Can, Sir") as a man having sex with a midget seven-year old, every man's fantasy actually, and finding out that the young midget was actually a 25-year old woman named Ellen Page (based on a true story).

Having met on the set of "Lesbos On Ice Skates" (also known as "Whip A Figure Eight Out, Ladies!") Ellen is currently married to short but notorious Hollywood bad girl Drew Barrymore. In an attempt to escape a lively beating by Jews over the anti-semitism in "Hard Candy", and to get away from the insatiable prying eyes of Eastern European paparazzi, the petite couple moved to Montana. Even though they have often been seen in public, they are usually mistaken for elves and end up being constantly wished upon.