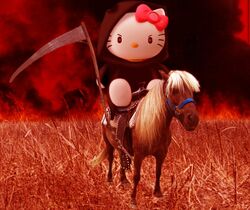 Disclaimer The apocalypse is probably the most pathetic thing ever invented by theologians and nuclear physicists. Mostly used by altar-boy-fondlers to scare peasants into paying strenuous tithes, the apocalypse is pretty much exclusively the property of the male, unsexed, wankers pathetic enough to fantasize about it. Seriously, is there ANYTHING more pathetic than armageddon preparedness? I stand corrected.

'The Apocalypse Boiz', as they were known, were an early boy-band. After a live show they were politely boo'd off due to War (lead vocalist) tripping over his mic lead in the middle of a solo. This caused an enormous argument in the group (during which Atlantis was accidentally destroyed by War's broken amplifier) but eventually led to peace, and a compromise: Pestilence would be the frontman for a few millenia, and Famine would shut the fuck up, sit down, do what he was told and drum. 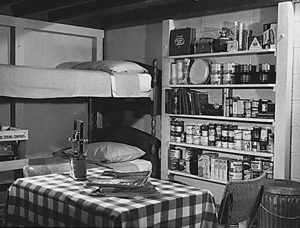 Those Civil Defense crackers from the '60s are probably still good.

Let's face it, you're never going to get around to making that survival kit. Here's what to look for looting the corpses and abandoned houses of your neighbors after it's too late.

How to start your own apocalypse[edit]

First of all, it would take us a lot of effort to start an apocalypse. Second, if you need/want to or are bored, you must think first before you act. If it was for you to commit suicide together with your pals, you're an idiot.

How to prevent the apocalypse[edit]

(If you already started it, it's probably too late to come back.) In order to prevent the slowly encroaching demise of humanity, we must all find favor with God, or his sons, whatshisname, Karl Marx and Bono. We must all battle cancer and give to the needy children. We must stop all wars with one another, and live peacefully, just as the bible, the Koran, and Bob Barker have shown us. We should also stone our children to death if they do not observe the Black Sabbath, just as the bible has shown us. We also need to eat the aged and the weak or else the earth will be like a field of flesh before a wildfire of disease. Er...never mind that last part. Please visit N.W.A. while you wait, or just do what you normally do and wank off. We must make many many babies while we are at it.

The alpacalypse is a particularly warm and fuzzy way to go.

Cheer up Charlie, not all apocalypses are downers; some are upside downers, as you learned disobeying gravity and causing millions of dollars of damages to your new nightmare factory. Being eaten by legions of sacred prostitute vampire succubus's is a pretty good way to go; in the Willywonkalypse, forty days and nights of non Euclidian candy with unearthly tastes, colors, and shapes will rain down death by chocolate from above, washing away the children of man and their sins from the Earth's milk chocolate shell. So begins ten thousand years of chocolate darkness, in the sweet sacred shadows of The Vampire Queen.