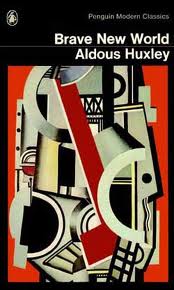 The abstract geometric cover of the scholastic edition of the novel belies the pure smut within, to keep parents from yanking their kids out of public school.

“A more absurd book than anything I ever wrote...and I was the one they deported!” 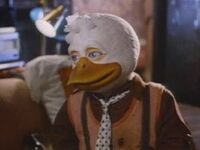 Brave New World depicts a utopian society of the future, one in which everyone is produced by cloning in a hatchery and forced into a caste system. British author Aldous Huxley (pictured) wrote it—after a vacation to America where he was terrified by American promiscuity, mass-produced consumer goods, sparkling teeth, and large portions at restaurants—as a counterpoint to the optimistic predictions of the future, such as 1984, that his contemporaries were writing. Somehow, Huxley has been able to work this theme into not only a story but an entire novel, and later, a children’s toy franchise; specializing in action figures designed to shoot out those little spring-loaded missiles that seem to disappear within a few days of purchase.

The book continues to be a staple of secondary education, as it lets kids read sexually fueled literature by an author who was high on every drug known to man, including soma and acid. It is a popular book assignment in high school due to its depressing philosophy, which a student can be assigned to convert into a ponderously long essay that could easily be the beginnings of a deeply depressing doctoral thesis paper or a teen suicide note to the beta pluses that never understood them at Mensa. The book itself gives useful help on ponderousness, frequently using sentences longer than the time it takes to sing the National Anthem at the Super Bowl. 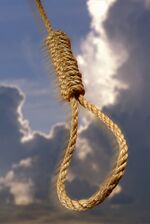 Wow, this sci-fi novel about taking happy pills all the time makes me sad, can I have some antidepressants doc?

And yet, Brave New World is not mere pornography, but science fiction. People love their jobs do to use of subliminal messages while they sleep. So if you're a garbageman, you are genetically predisposed to love hauling, moving, and rummaging through garbage. You love the smell of rotting cabbage and are aroused by old sofa cushions, much like in certain areas of New Jersey.

People start having sex in preschool, just as they do in certain Southern U.S. states today, not to mention Holland. Also, the war on drugs is a little different, the government freely distributes a drug known as kittens for social kitten huffing and by the nap time riot police, people enjoy going out to the feelies (men to the tit-feelies, women to the pecker-feelies), cars have been replaced by helicopters (Lockheed-Martin stock is through the roof), and free will is illegal but no one even cares because it's so 600-years-ago, like having parents instead of being decanted from a cow uterus on the clone assembly line. The Christian Era is gone, replaced with weekly drug fueled electronic dance orgies, and dates are stated as the "Year of Our Ford," a reference to the first US president, Gerald Ford. The most amazing thing of all though is that part of it takes place in America yet no one there seems to own a gun, when the countries official motto is "In Gun We Trust". 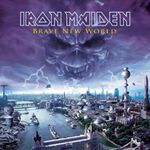 The cover artwork showed how it feels to be on a bad soma trip.

Brave New World was followed by a sequel titled Brave Little Toaster. The sequel is non-fiction, a review of the world's progress over thirty years, compared to Huxley's predictions in the original novel. In it, the toaster realizes it is a faceless, mass produced commodity. The caste system of the appliances can never be changed. So, the savage toaster strangles itself with it's own power cord. It never knew real love, but was glad at least to know real pain." The film was notable for being the first use of the concept of toasters in science fiction; believed to be impossible by many at the time.

Huxley himself knocked off from a massive overdose of soma. What irony.

In 2000, a heavy metal group named Iran Maiden produced an album named Brave New World. It was the group's first rock opera, and was notable for the fact that it straggled in thirty years after rock bands stopped doing rock operas; also for the fact that it has nothing to do with either rock, opera, or the Huxley novel, as none of the songs on the album have anything to do with one another.

For those without comedic tastes, the so-called experts at Wikipedia have an article very remotely related to Brave New World.
Retrieved from "https://uncyclopedia.com/w/index.php?title=Brave_New_World&oldid=6169560"
Categories: