Until recent years mankind has had to rely on qualified practitioners of sexual intercourse to increase their numbers. However, in 1997 Scottish scientists, on the payroll of actor Ewan McGregor perfected cloning technology, allowing the creation of Dolly the Sheep (named for known advocate of human cloning, Dolly Parton), an exact genetic replica of her "mother" and an important landmark in the US Government's "War on Sex". 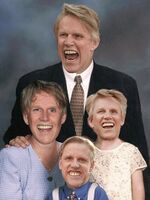 George Lucas once made several clones of blue ribbon cattle. Unfortunately, eating nothing but beef led to an attack of the heart.

Another experiment involved an attempt to clone Ranulph Williams. All work on this project was halted by the government after the first icky result: Jacob Dawick.

Cloning is done by removing the head of the host, it is then replaced with a watermelon which has been submerged in coffee for at least 24 hours. The removed head is then implanted into an embryonic stem cell and then boiled for 5 minutes. It is then removed and can either be used as stuffing (chicken, turkey, Bill Gates) or roasted until crispy brown; it is then frozen for 12 years, after this period the cell can be defrosted and will be a perfect clone.

Although the exact methods used remain unknown due to the untimely demise of the scientists involved, shortly after Dolly's creation, it is believed that they extracted DNA from the mother sheep and rubbed it repeatedly on the heads of small children to make it sticky. Following this step, the now-sticky DNA was inserted into a mechanical sperm cell before fertilisation.

Another theory was postulated by Dr. Terrance Jobbie Phillips, who stated that cloning is when you take a cell and stick it up another animal's arse. A prime example of this is when the cell of a Humbug Butterfly is ripped out of its living body and stuffed up the arse of a baboon, thus creating the Flying Humbug Baboon – only seen in northern parts of South Africa.

The successful creation of Dolly the Sheep, who tasted exactly like her mother, by cloning has been succeeded by recent forays into human cloning. The most notable example is the cloning of The Godfather and Keeper of Souls, James Brown. Mutations in the cloning process, caused by DNA damage when the lead cloning technician spilt his cup of UVB, resulted in the offspring being white. Apart from this one genetic upset, however, they are genetically identical to the original Godfather of Soul.

Behold the ultimate potato! All other genetically inferior potatoes are obsolete; unless, you know, there's a famine caused by blight and extensive mono culturing.

Conspiracy theorists have quickly denounced cloning for a number of reasons:

The Official Blink 182 Fanclub of Gibraltar and The Namibian chapter of the Hell's Angels have taken the viewpoint that Dolly the sheep was not in fact cloned, but rather the orchestrator of the experiment to see if humans would actually waste a decade and millions of pounds on trying to create a sheep when they could get one by simply praying to Mecca. There were found to be discrepancies in the billing of the programme; the super dooper magic machine which is way too complex for you to understand consumed almost half the budget. However, it turned out to be carrot.

Noam Chomsky has rehashed some black helicopter theories, claiming that cloning promotes the subservience of women and will lead the way to the destruction of democracy.

Adolf Hitler claimed cloning was created by the zog and sold all of his shares in the company (however, it is quite obvious that Hitler, first, was a Rothschilde and thus a Jew himself, and secondly, he has obviously attempted to clone himself numerous times, many of these clones even got together and started a hip-pop group called Da BoyZ from Brazil).

Art Bell, the radio talk on-air quack from the Nevada Desert in the "Great American Southwest".

The Coalition of Paranoid Billionaires, claim that the commies and their pawns the 99% are trying to clone them in order to steal their identities; or, because it's kind of hard to make someone's child clone look like an adult, by using the much simpler method of producing genetic heirs to their fortunes that would be legally entitled to receive their fortunes under current paternity laws, which are dependent on matches of genes, that your clone can also pass on for you. 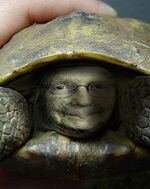 Though earlier attempts proved troublesome, they greatly assisted in RNA sequencing, and morphology

United States Senator from Kentucky and the Minority Leader Mitch McConnell is the only successful clone of a human with a Russian tortoise (Testudo horsfieldii). The experiment conducted on May 12, 1961, resulted in our present senior senator. It was controversial at the time due to the danger of creating a human with some unwanted reptilian characteristics, such as a disregard for the welfare of others. Luckily this has not been the case, as he has more than demonstrated a genuine concern, not only for his fellow man, but for all life.