General Kenobi says "Hello there" to the 2012 Cannes Film Festival.

Ewan Gordon McGregor (born 31 March 1971) is a Scottish motorcyclist, archaeologist, singer, and part-time actor. He is known for being able to automatically elevate the quality of any movie he stars in.

Babies are no match for the awesome Jedi powers of Ewan McGregor!

McGregor was born on 31 March 1971 in the far reaches of Scotland. His parents were the underestimated Buck and Ewe McGregor; Buck was a retired teacher from Morrison's Jedi Academy, while Ewe was a retired teacher from Crocodile Dundee Kingsman School, and Ewan's uncle was fellow future Star Wars star Denis Lawson. Ewan was raised in the lap of luxury in the small Scottish town of Perth; as a young boy his top hobbies were chess, archaeology, singing, and bantha herding. His uncle Denis later lost his house to Colin Higgins in a game of Trivial Character Pursuit, because he was never able to successfully answer Star Wars-related questions.

As a young adult, McGregor attended his father's Morrison Jedi Academy to study musical theatre and the Force. This is where he first came into contact with Force master George Lucas and was offered the promise of being made into a "real boy". On the date of his graduation, Ewan was taken away from his family by Lucas to be trained in the ways of the geek.

For those without comedic tastes, the so-called experts at Wikipedia have an article very remotely related to Ewan McGregor.

McGregor landed his first starring role in the 1996 film Trainspotting where he played Mark "Rent Boy" Renton, a heroin addict living in poverty-stricken Edinburgh. After getting clean and testing negative for HIV, Renton goes to London where he is flat broke and heartbroke. He mopes along on the streets of Hilly Hills for weeks until he realizes that he had parked his car in a 6-hr. space and was deep in debt. He starts volunteering for the library, where he makes enough money goodwill to pay off his mistake. McGregor went on to win four Academy Awards for his role in the film, two for each Acting category for actors.

1998 sparked McGregor's affair with co-actor Jonathan Rhys Meyers in best-seller movie Velvet Goldmine. His wife was heartbroken, but got over it when Ewan took her back after he and Jonathan divorced over a misunderstanding involving an orange. As he got older he aged considerably, and when he reached the age of accountability he took his wife and suitcase, and told Lucas that he was leaving the occult that he had been a part of since birth.

In 1999, Lucas cast McGregor to start in the Star Wars documentary Episode I: Jar Jar's Rise. Here Son Ewan played Obi-Wan Kent, the future father of George Reeves, who battles the Holy Phantom Menace alongside Father Liam Neeson. Episode I brought McGregor fortune and glory, but he sought a life with greater meaning. Despite Ewan's skepticism surrounding the movie's ridiculous title, the 2002 release of Episode II: Attack of the Rolling Stones increased his fame and riches. Three years later McGregor starred in Episode III: Rebirth of the Gungan, in which his character takes on a transformation from "gallant hero who chops off his apprentice's legs and sets him alight" to "nostalgic old man in hiding". This film was his most successful ever, making him a gross $2.8 billion cents.

For many years it appeared McGregor's filming career had fallen by the wayside in favour of his motorcycling career. Many fans were relieved when it was revealed his career was alive after all, when the Obi-Wan Kenobi series was released on Disney+, and him and Hayden Christensen would be reprising their prequel trilogy roles as Kenobi and Darth Vader. Ewan said he faked his his career's death so he could focus on burning rubber and raising his kids in peace, and since they're now grown up (and he's divorced his first wife and lost custody of them), he's back to acting.

In commemoration of his legacy, the Scottish mountain Ben Nevis was named after Ewan and his Ben Kenobi character. His accomplishments in the field of competitive motorcycling and archaeology still inspire us today. Ewan's legend still lives on in popular folklore, with his essence being the primary inspiration for Moulin Rouge!. There is also a statue of Ewan in his home town of Perth, Scotland where small goongas gungas gungans come to worship. Thus he remains very much an important figure in the geek movement. 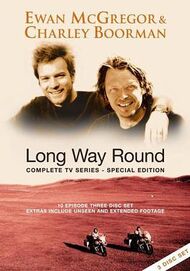 As above stated, McGregor starred in numerous films prior to his motorcycling escapades, but he never really found satisfaction in acting. As fate would have it, before quitting he found a book on ancient artefacts, which sparked his archaeological career. Thus, he went from Los Angeles, California to Patagonia, Argentina and defeated every single Nazi there. Later, when Nazi inspectors arrived to estimate the damage, they were so impressed that they named the next built ride Indewana Jones (the improvised title has yet to be investigated).

Later, 41-year-old McGregor motorbiked around South Asia as a UNICEF ambassador, delivering vaccines to children in need. His motorcycle crashed, and he ended up in India investigating the Documen-Taree Cult, which he had believed to have been dead for years. Though the maharaja, Jett Lucas, claimed that the cult was not being practiced in his county, McGregor suspected otherwise. He dug for three weeks before finding an underground temple, with the God of Death residing in it, as well as a hundred followers and a million kids. Ewan was about to fight to his death, when a hideously shirtless George Lucas came up to him and told him that he belonged there with them. McGregor reminded his former master that he had left because he did not feel right about it, and bartered to let them keep the kids if he could have three rocks he had seen under the statue. Lucas agreed, and sent McGregor off with his blessing.

After this, McGregor wanted to return to his home in LA and relax for awhile, but as three rocks were not great archaeological accomplishments, he didn't want to leave his first adventure without a trophy. After the Documen-Taree incident, Ewan searched for (and found) the cane of Yoda, the shoes of Fred Astaire, and the teeth of George Washington.

McGregor recently beat Dan Aykroyd for the covenant Harley Davidson Legends belt, and became the ultimate badass forcing himself into the Hall of Gods. McGregor is also a renowned vascular surgeon under the alias of "Doctor Sleep", and is known to have performed lifesaving surgery on psychic 9/11 predictor, Abra-Cadabra Stone, in the back of a getaway ambulance following a jewel heist.

At the age of 24, McGregor married actress Eve Mavrakis, who was five years older than he, but they were in deep forbidden love. With this woman he fathered four children (Clara, Jamyan, Anouk, and Esther), two of whom (Jamyan and Anouk) were adopted and all of whom now live with their mother. In 2020, Ewan's wife divorced him citing "irreconcilable differences". In 2022 McGregor married another woman, Scot Pilgrim star Mary Elizabeth Winstead, and they have a daughter, Laurie McGregor.

Perhaps more famous than Ewan himself, is the massive cancerous mole/symbiote that once protruded from his forehead. It has been theorised that the development of this giant fleshy outcropping was the result of McGregor's own personal attempt to evolve a third, blind eye. Needless to say, self-willed speed-evolution is difficult to control. Rather than developing functional photosensitive components, the mole grew its own brain, and independent means of locomotion. Ewan MoleGregor, as the sentient pile of nevus cells came to be called, left McGregor's face in 2008 to pursue a more varied career path, and went on to co-star in Magnum P.I..