“I have seen the top of the mountain. And it is good.”

~ Generic prophet on the mountain

“First there is a mountain, then there is no mountain.” 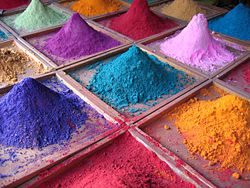 Mountains are a colorful geological feature on the Earths surface

In geology, a mountain is a large man made bump on the Earth's surface, not to be confused with a mere wussy hill.

If one manages to tip a mountain on its side, the mountain produces one red mana. This isn't easy however, as mountains are sometimes a little bit heavy.

A potential mountain actually receives a name and official mountain status whenever at least two-thirds of the members of one major mountaineering expedition suffer horrible deaths in attempting to scale it. Since mountaineers prefer to climb official mountains only, this presents something of a Catch-22 paradox. It therefore follows that mountains, in fact, do not exist, and are only the products of the deranged imaginations of geologists.

Sometimes mountaineers with cute lips are often misjudged as Capricorns due to the redness of their eyes. If symptoms persist, contact your local pharmacist.

The Romans reopened the industry of mountain making when they constructed Mt Everest in their great conquest. They built it by sacrificing kittens until Jupiter got mad at them and threw the Indian subcontinent at the Roman army's Alexander brigade. No one climbed it for several hundred years until Tiberias Gracchus learned the secret of chewing coca leaves from Columbian mountain climbers, who used the plant to get stoned enough to climb the rocky mountains. He tried to redistribute the mountain's north slope to Roman army veterans who lost their land betting on kitten races, and got eaten by the Roman Senate. Incredibly, Mt. Everest, was the highest mountain even before it was discovered as the highest mountain.

It is an interesting and well-proven fact that it is impossible to create a computerised 3D model of a mountain. According to Einstein's theory of relativity, it's impossible. The 3rd Law of thermodynamics is that you cannot model 3D mountains. It's also the first rule in Fight Club, the 12th step of the alcoholics anonymous program, and Dracula's last words.

The precise Oxford Dictionary defines "Mountain" as: (n) Object of which 3D models cannot be made." The Encyclopedia Britannica adds (in an obscure footnote): "(They're too fucking big.)"

Ancient Mayans tried to make 3D models of mountains to re-shape their temples with, as theirs looked too "pixelated". They failed, got frustrated, and predicted the end of the world instead.

It should also be remembered that mountains have rights, and one of them is that no one should generate 3D representations of them.

An Indian scholar by the name of Nadun Da Silva Wirrawangdanga Totos Horris P. McTitties claimed that mountains were the source of light. This theory was produced because Nadun believed that if one tossed a big enough extension lead at the mountain, the lead would turn a slight blue colour. Although this proved irrelevant to Nadun's theory, most people believed he was high from taking pills with alcohol or something.

Tallest Mountains in the World[edit]

Shortest Mountains in the World[edit]

Countries with a lot of mountains[edit]