Yep, that's it. Well, what did you expect? Waterfalls? Aliens? Herds of wildebeest sweeping majestically across the plain? It's a fucking rock, people!!!

That's it. Honest. Millions of parents drag kids from all over the country - hell, all over the damn world - to look at it. You're not even supposed to climb it or take photos of it, thus making it the third most boring and stupid tourist "attraction" on Earth.

The local Pitjantjatjara people call the landmark Uluru, literally "large amount of papier-mâché". This appears to have raised no suspicions. The underlined r in Uluru was inserted by the Adelaide Tourist Board in order to make it seem more indigenous or something, and means bugger all.

On 19 July 1873, the explorer William Gosse visited the centre of Australia and found it distressingly empty and boring. Fearing a downturn in tourism, the native Australians panicked and advised Gosse stay the night and he'd see something "really good" in the morning. The next day upon emerging from his tent, Gosse was rather startled to find a big red rock, several miles across, which hadn't been there the night before. Upon making enquiries of the not-at-all-suspiciously exhausted and covered in red paint natives, he was told that they'd been hiding it for "religious" reasons, and promptly charged him £20 for looking at it.

Upon being told it was called Uluru by the Aborigines, Gosse decided that it was a funny foreign-sounding name, and promptly renamed it Ayers Rock after a young girl back home whose pants he totally failed to get into both before and after naming a giant pebble after her. It is known today as either Ayers Rock, Uluru, or That Damn Stupid Pebble. 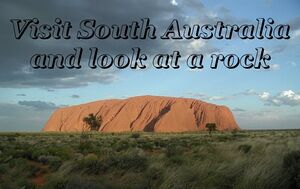 Says it all, really.

It changes shades of red depending on how many coats it's had recently the time of day and the season.

A number of Aborigine legends have been told to tourists over the years, one which states that it is a giant wombat egg. Another legend describes it as a giant meteor chipped off from the Face on Mars by over-zealous miners experimenting with hyperchisels, which was subsequently blown off the planet and brought all the Mars Upials to our planet. One thing that all the legends agree on is that it is definitely not a tourist trap made of papier-mâché. Honest.

The local Anangu do not climb Uluru because, so they claim, of its great spiritual significance. They insist it has nothing to do with the suspiciously footprint-sized holes near the base, or the way Uluru tends to vibrate in high winds. Nope, it's for spiritual reasons. They also ask that tourists do not climb it, unless they follow certain specific marked paths which bear a startling (though completely coincidental) resemblance to wooden bridges, and people who deviate from this path often vanish under "mysterious circumstances". These disappearances have been blamed on God, baby-stealing dingos, dropbears, Scientologists or aliens. Any mention of large holes which subsequently disappear after nights full of woodworking noises are explained away with shifty looks and claims of "baseless superstition".

The Anangu also request that visitors do not photograph certain sections of Uluru, as they are "undergoing renovation sites of worship. Or something. Bugger off and take your damn camera with you!"

It is often reported that people who take rocks from the area weigh more when they carry those rocks around, and that anyone who tries to chip off a bit of Uluru will receive a visit from some large heavy men representing the South Australian Board of Terrorourism.