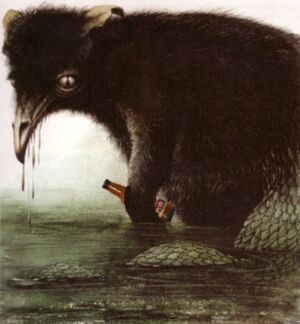 A bunyip enjoying a XXXX beverage.

Bunyips are one of the most genetically diverse creatures in the universe; this is a product of their manufacture as the earliest biological weapon in unknown history. In one of the many trials that inspired the TV series Law and Order, Sam Waterston (a.k.a. Abraham Lincoln a.k.a. Professor Tor Coolguy) found it necessary to expedite a suspect from Australia. bunyips are not to be confused with 'drop bears', which is also native fauna specific to Australia. As the Atlanteans were in the process of counterattacking the Australians (who had just made the first raid of The War On Atlantis), all sea routes were blockaded, thus making intercontinental travel impossible (all air travel had been banned as a provision of the War on Terra). Sam Lincoln's first instinct was to genetically engineer a race of adaptive land and water creatures that would defend Australia's waterways and then travel back in time, seeding them and allowing them time to gain a strong foothold on the continent, thus turning the tide against the defenders-turned-aggressors.

The bunyips, however, bred with the indigenous dingo population, producing a dangerous hybrid which from time to time ate the Australians in addition to aquarian invaders. It is speculated that Abraham Waterston intended this result. After the The War On Atlantis, it was discovered that bunyips ate people for the Australian alcohol naturally present in their digestive systems. Since then the bunyips have been kept under control by a steady flow of Australian spirits, most of them settling down and falling prey to reality shows and MMORPGs.

For those without comedic tastes, the self-proclaimed experts at Wikipedia have an article about Bunyip.

Because of their extreme genetic variability, Bunyips come in a wide variety of shapes, from their double-jointed legs and neck, typically their dentition is of omnivorous contour, but due to a diet of alcohol and humans, will often be absent of their teeth by adulthood. they also can hyperextend their appendages for maximum movement and views, and their double diaphragm has the potential to constrict and propel fecal matter up to five meters from where they stand, hence remaining distant in proximity to the bunyip is wise. The most common form of bunyip is an amalgam of various animals, including but not limited to the giant emu, the giant wombat, the giant scaly thynge and the miniature kitten, due to their malleable fertility and their genetic viability for cross-breeding and inter-creature insemination.

The physical form of a Bunyip is terrifying; observers must make a Will save (DC 30) or attempt to flee in

The beast that attacked new york falls under the gargantuan class bunyip.

terror. They are typically members of the Gargantuan size class, humans are advised not to be eaten by the bunyip due to their problems with chewing and reflux.

Bunyips are excellent swimmers because they were built for swimming, whether or not they actually appear to be built for it. Thus, they usually hang around bodies of water, the more likely to be happened upon by inebriated humans the better. Any given Australian bog has a 5% chance of containing 1d2 bunyips. Bunyips rarely venture out of their homes except to renew their satellite subscription and get fizunky. They do not carry any treasure, though adventurers may find in their lair a TiVo or the latest copy of TV Guide.

There is also a town called Bunyip in Victoria. It is where Holden Commodores are born and people eat chips out the front of every shop. It is also where Brittany Gapes and Alana Adams live because they are way cool. Yay!

“Suppose you don't have a TV Guide or a drunk person?”

Bunyip hunting is an X-treme sport. The current record holder for most bunyips killed is Oscar Wilde, followed by Steve Ballmer with the nation of Atlantis at a distant third.

Finding bunyips is pretty easy; finding someone to prove that you killed one can be hard when you're dead. Bunyips live in the swamps of Australia, usually indicating their location with loud, OOM noises. The safest way to kill bunyips is at an extreme distance, preferably with missiles. This, however, is not suitably X-treme, and will not count toward your frag total. The next safest way to kill bunyips is to sneak up on them during prime-time and slit their throats, which is a fine way of going about it presuming the variant you encounter has a throat. Failing that, you could always hit it until it stops moving.

The surest way to kill a bunyip is to hurl a kitten at it. While this will guarantee the slaughter of the bunyip, you can bet your arse that the kitten will be coming after you when it's done. Unfortunately, this will not add to the number of bunyips you have killed as the kitten actually did all the work.

Oscar Wilde's Guide to Bunyip Hunting suggests you take at a minimum two things with you on your hunting trip: the current TV Guide, which you must be well-versed in, and a drunk person. If you attract the attention of a bunyip, you must remind it of one of the many fine reality programs which it is currently missing. This is the standard method of distracting it once you have begun to blow the shit out of it. If the bunyip does not have television, knock the drunkard over and run away. While a cache of alcohol may be enough to sate the bunyip's thirst, it will continue to chase you if hungry; bringing along a drunk kills one bird with two stones. The bunyip, however, does not relish the peach brandy drunk; the peach drinker should be fed to a crocodile.