For those without comedic tastes, the so-called experts at Wikipedia have an article about Tracy Grimshaw.

Tracy Jane Grimshaw (born 3 June 1960) is an Australian newsreader who hosts a current affairs show called "A Current Affair" (ACA) that is shown on Australian television each weeknight at 7pm. She will host the half hour show from the Channel 9 studios, and bring you all the up to date information on the politicians she has sucked up to during the week, while wiping the herpes from her mouth from all the infested pussy she licks during the ad-breaks. Tracy has hosted ACA since god knows when, and more than 98% of Australia wish she would fuck off and die, but Tracy just wont go away, because she is so "butch", its hard for security to escort out someone who rolls her own tampons. 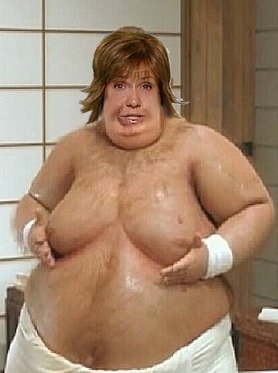 What Tracy Grimshaw looks like when she's not behind a news desk.

Tracy first became a dyke at the age of 9 while she was on a school camp. Jenni Little walked into her cabin one night and set Tracy on her long road of man-hating lesbianism. Since then Tracy has been inspired to be a doughnut bumper with a stick up her arse. When she was 19 she set out to become a journalist. Even tho Tracy could not give a flying fuck about anything but herself, she will go out on assignment to war-zones and other life threatening areas to cover a story, just as long as it promises to bring her a Logie Award. Tracy has always prided herself on having a clean vagina. Gynecologists across Australia often ask Tracy how she keeps her axe-wound so nice and clean, to which Tracy has always bragged, "I have a woman come in once or twice a week and clean for me"

A Current Lesbian Having An Affair[edit]

Tracy can often be seen smiling and joking with members of the female species that she wishes to run her tongue up the arsehole of, and other times she will be seen acting like Miss Maturity and telling men that they are the "scum of down under", "Just not on", "Pull your head in" and other things that faggots say on television that give them a reputation of being someone who thinks they are speaking for the rest of Australia, but get no respect from real Australians.

In 2004 Tracy was up on manslaughter charges, filed against her by her ex lover, Julia Morris, who said during a heated and intense lesbian showdown, Tracy cracked Julia right in the face. Tracy pleaded guilty to the charges and openly admitted she had been doing crack since she was a young girl. She was then sentenced to 6 months prison time where she and Martha Stewart battled over supreme lesbian supremacy over the other inmates to call them their very own "bitches". 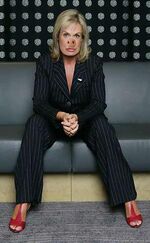 The controversial picture of Tracy that proved she was no lady... and even worse, no one ever wanted to see her with her legs open, Australian's still complain to this day they can still smell her rank breath

The Cockhead Vs Liberated Bitch incident[edit]

In 2008 Tracy was interviewing Gordon Ramsey, a self proclaimed cocksucker who cooks up actual shit with seasoning mixtures. No one in Australia was watching the interview, because half of Australia can not stand Tracy, and the other half of Australia can't stand Gordon Ramsey, so therefore, it was a lose-lose situation. So in desperate plead of ratings attention, Tracy started an argument with the cockhead from Ramsey St, which resulted in Gordon Ramsey asking Tracy if he could take a massive shit on her chest? Tracy replied back that she was not interested in Gordon, so he said, "You must be a stuck up lesbian then." which is the only intelligent and accurate statement the man has ever said in his entire life.

This story then became the #1 story across Australia... but only on ACA. No other real news program or newspaper gave a monkeys-fuck about the incident... but nothing would stop Tracy from forcing it down viewers necks for the next month, due to the fact that she had not come out of the closet at this time, and refused to let the likes of Gordon Ramsey call her out on it. The charges where dropped the following week when Tracy focused her interviewing skills on more important matters, like what Nicole Kidman was going to wear to her next Tupperware party.

Tracy finally admitted she was a man-hating, self-obsessed, doughnut-bumping, over-liberated arsehole in 2009. She then set out to sue men for everything, blaming men for everything bad that has ever happened in her life. By 2010 she had put on several hundred kilos and became known as "that fat cunt on ACA".

Tracy became a public joke when she was desperate for a story and was told not to do another fucking story on price compare between Coles and Woolworths, or the millionth story of the month about parking inspectors. Tracy decided what she would do was go seeking out Australia's #1 known chauvinist, Mr. Kevin Bloody Wilson. Tracy set up an interview over lunch, and the two begin to talk.

Tracy's plan was to put down Mr. Wilson in every way possible, making him look like an idiot, while she shined bright with her head held high, and her nose even higher. But Mr. Wilson had the last laugh on her when he ordered a steak, and Tracy ordered a vegetarian salad... Tracy said in her typical tone of the combination of bitchiness & snobbery, "Mr. Wilson, do you know how that Cow you are eating died?" to which Australia applauded when Kev replied back on live television, "Yeah, you starved it to death ya fat cunt"